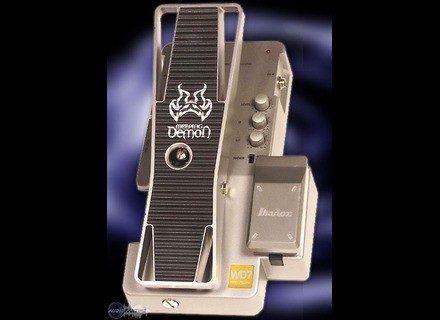 WD7 Weeping Demon, Wah-Wah/Auto Wah/Filter for Guitar from Ibanez in the 7 series.

See all 8 classified ads about the Ibanez WD7 Weeping Demon »

Ibanez WD7 Weeping Demon
4
This wah is feature packed. Volume knob, voicing know, and low end knob. Also has a bass function switch. But the biggest feature I think is the ability to use it in auto off mode, which I will go into later. This is a digital wah I believe and the price reflects that, however I have used a lot of stuff in the tone-lok series and in my experience they are every bit as good as the higher end Ibanez pedals.

There is actually a slight learning curve with this pedal. The voicing knob takes a bit of getting used to. The low end knob is pretty easy though. You really just set it in respect to your guitar to dial out or dial in how much low end you want. The tone lok feature is something I wish more people would do. It's a great thing for touring guitarists like me who are tired of their knobs getting pushed around. I never use the bass switch because i don't use this thing with bass. With the voicing knob, it kind of determines how aggressive you want the wah character to be. It doesn't have a huge range though. But it's nice to have.

The auto off function is why this is one of my favorite wahs. When I'm playing live I don't always have time to switch a pedal on and off manually. The auto off feature basically does this for you. You would think there would be some hitches with the execution but for the few years I've been using it, I've never had any trouble. It works just like it should.

Now here's where this wah falls just a bit short. The weeping demon is a very aggressive sounding wah. Notice I don't say bad. It's just quite mean sounding. This can be fixed a bit with the voicing knob, however that will only go so far. In a nutshell, if you want a classic sounding wah like a Dunlop or a Fulltone, this isn't it. It's a very modern sounding wah and will lend itself well to more modern styles. Personally I only use this one when I play heavier music. For other stuff I like Teese and Fulltone wahs.

I really don't mind the voicing because in the band I use it in, it's fine. I simply step on it for solos and it magically comes to life in all its mean snarly glory. For the value I think this is an amazing wah. It can hang with my other ones costing over twice the price. And the features are up there with the Clyde Deluxe.

A little aside, at one point the input jack on mine came loose and gave me some trouble, but I did a little tooling and got it back to normal again. Overall I would say this was incidental and this is a very solid pedal. It's made of metal not plastic. It feels really solid.
Did you find this review helpful?yesno
»

Ibanez WD7 Weeping Demon
3
This is a heavy-duty wah, has a lot going on. It's a wah, but it has a lot of extra features going on with it. It can use a 9V adapter or a battery, and it has 1/4" inputs and outputs. It doesn't have MIDI or USB connections, and is not rackable. It's an analog pedal.

This pedal definitely has a lot more in terms of functions than most wah pedals do. Besides just the rocker, it has three knobs. One controls level, and can act almost like an overdrive or boost to the signal when the wah is in use. The second know controls the range of the filter, giving you either a subtle or an enormous sound. The third adds a low end boost, which is needed on some guitars and amps when using wahs. It seems they thought of a lot of different things when using this pedal. Beyond that, there are two modes: one has a footswitch (next to the rocker) that turns the effect on or off, and the other mode has a touch sensitivity that will activate the effect when your foot is placed on it.

I was expecting more from this wah. It has a lot of cool features but it just wasn't bright enough for me. That's one thing that kind of disappointed me, as it had a lot of other variations, but it didn't really allow you to control the high end, which is really the only thing missing. That's probably because this pedal is better suited to metal guys like Steve Vai, and guys like him, who need a wah to work with insane amounts of distortion. Guys like that really aren't into the same sounds I am, I like a wah when it's almost clean. I'd say that there are better wahs out there in terms of sound.

While this wah certainly functioned better than most, I'd have to say I'm disappointed in the sound. It's really cheap which is probably why I'm not that into it. I guess the target audience is into heavier stuff than me. I'd recommend that if you like Steve Vai and eighties-style shredders, then try this out, otherwise don't bother.
Did you find this review helpful?yesno
»

-Livingroom-'s review (This content has been automatically translated from French)" modern wah that changes."

Ibanez WD7 Weeping Demon
4
Wah wah analog heavy and sturdy. Several modes (automatic and standard) and three knobs to adjust the bandwidth and swept frequencies. Pedal without rack and has a setting with a large screwdriver to adjust the flexibility of removable tray (I have not found effective). Powered by 9V (if the electrical system is good, no buzz). Jack in, jack out and roll youth!

At the configuration it goes, if you knows a little in frequency can be tweaking knobs (no drastic changes anyway), if any is left straight, and it's still a kind of wha. Where the use is not really practical, is that normal mode is made between the tap switch is on the side of the plate and the latter, and in the other mode, it is like an idiot if you want to leave wha triggered simply filter the sound, or even if you want to attack from above the race, we're fucked too. Therefore not practical at all to me.

After regarding the sound is very clean, very modern (except its clear where you need to be cautious if it saturates very quickly). This is not true bypass, it's pretty clear, however, depending on the settings of the switching effect we will capture. It also works for the bass (although I do not like wha on bass), and keyboards which I think is more in place on a guitar. In short, I think it lacks warmth and musicality, it will be at ease for shredders and other virtuosos, currently this wicked sharp side which displeases me (regardless of settings). Then again station saturation, suddenly it's good for fat sounds, possibly the modern funk, but it is more complicated for the rest. Nevertheless it remains a good effect in its category that is not very open to me forever.

I used 2 or 3 years so I know it well, I like its weight and strength, but I sold it for a cry baby, and then I came back on a morley which also combines the volume and strengths of both. I do not know the price now, but back then 120 bullets for it I found it a bit expensive.

There are very good things, but we must render unto Caesar what belongs to Caesar, its use is limited musically, everything is too clean, and as often with Ibanez was no personality (and ultimately musicality).

Ibanez WD7 Weeping Demon
5
Bypass transparent.
Solid metal housing.
Two possibilities to activate: a switch next to the pedal (can activate it by leaving the pedal in a certain position for use as a filter certain frequencies) or automatic (as soon as you touch the pedal the effect snaps). You can set the time at which the pedal is off once back in its normal position.
In automatic mode, the pedal automatically straightens: well done. (Like a car accelerator)
3 buttons to adjust volume, intensity and frequency of the effect.
A switch guitars / bass change the frequency range of the effect.
There is also (perhaps even more, I can not remember) that allows internal knob tweaking yet his wah.

Some examples of settings in the manual, and then adjust to taste.
The pedal travel is very long, it changes a CryBaby (or Vox).

Very versatile, both big saturation funk that, depending on the settings. Tip top, even if it is not really a "wah-wah" as can be heard everywhere (it also depends probably my settings, I wanted a compromise for use in clean funky and good saturation). But in the end, so much the better.

Strong, effective. No complaints. A bit cumbersome on a pedalboard (mostly because of its shape).

And preferred compared to other wah in the same price range or a little higher.

Did you find this review helpful?yesno
»
Read the 21 user reviews on the Ibanez WD7 Weeping Demon »