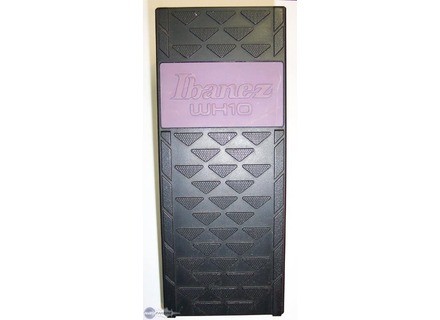 WH10 Wah Wah, Wah-Wah/Auto Wah/Filter for Guitar from Ibanez in the 10 series.

fruscianteshadows's review (This content has been automatically translated from French)

Ibanez WH10 Wah Wah
4
It's a Wah Wah Ibanez produced in the 80's in Japan of a unique quality. Only small problem, it is not plastic solid trs. It has a small knob on the cot that can change the sound of the Wah and a choice guitar or bass.

Operation is extremely simple. You support trs fort is the sound is. The small manual is not helpful trs. No problem.

Edit: APRS one year of use, I lower the note because it is really fragile and sometimes the pice links to jump knob, which is trs Nerva.

Then it's the slap! The sound is just beautiful! The small knobs allows him to change when a sound and frequencies. It's just one in 10 Wah. You can also use a scratching by setting low is vice versa, it makes sound great.

If you find one, take it. It is simply gnial! It can make all the wah sounds can be imagined .*

Edit: Trs good wah, but super fragile, and an increase in gain when triggers, which may be Gnant.

The rest I do not know.

Super simple ... a button "depht" to set the course of the effect, a switch bass guitar ...

Ba must still know how to handle the beast) Yes very simple.

With a guitar, but in the future with a low, too, is a wah guitar and bass

For several hours, and it's absolutely fantastic.

I already had a Vox V847A which filled me but between the purchase and that of my WH-10 I became a very very big fan of Frusciante and Ancinnes wah satisfied me more saturation level, I thought to keep blues sound but the clean sound of the WH-10 is awesome so that I will pass away VOX my pedalboard ...

Small problem, the switch is hard to activate, infact you have two mousses, and if you remove when you modulate the effect you disable the automatic wah ... So do not remove it.

Very good, a repeat of the legendary wah Frusciante uses a wah and more for as well as bass guitarist for only 89 euros .. I would have put 60 more.

Absolutely! Fan of Red Hot and Funk, run a store that sells and buy without hesitation!

redpill's review (This content has been automatically translated from French)" Blah blah, for the fans ....."

without a diploma of engineer that might not be hard ....

I had this wah, new version, because I was asked to lay a tru bypass. I could test it at some length compared to other wah.

Already, a point the poor quality of mechanical components.

The most problematic is surely the knob (which is much in demand as in any kind of wah) is very small and with the track open to the outside (nest dust). It will not last long in my opinion. It will quickly spit out or be damaged by wear (FYI, it's the same knob that found in the volume pedal "Bespeco" was 20euros). Molo's better to go. Doubts also switch on the little bass / guitar.

sound, nothing too amazing here, its a stupid filter has two options. Convaincus.Ca frankly not an illusion but it's still fairly "flat", with no personality and little interest.

If you pass on the concerns that may be the potentiometer (everyone does not open its pedals to see that what's inside) It can parraitre innocuous but vital to a wah like this. AC is correct. After the sound is a matter of taste.

However, if there had been no popular Frusciante for this pedal, Ibanez would never reissued. But he said it would probably be a shame not to capitalize on its name and sell a ca fans who find it absolutely wonderful.

(A note for those interested, the pose of a tru bypass is possible platforms because the space is very small and the pedal arranged so that one can not practically do anything in)

zephyrsong's review (This content has been automatically translated from French)

Ibanez WH10 Wah Wah
5
Well I see no page for the new version so I post my opinion ii.
I availing oneself of version 2 was released in January.
Availing oneself of it the same as the original rglages namely:
A knob-depht which accentuates the effect and gnre a boost
A switch-guitar / bass
There is also a small LED on the cot to see when the pedal is activated.

Usage is very simple. A switch to activate the effect (as in standard wah). The small problem is that it is hard to activate when you play sitting down. So I tape a small piece of mdiator on the party support the switch and the engagement becomes easier.

Availing oneself of a cry baby I only sold it to buy me at this wah. There is no picture, ibanez nettment is more musical than the Dunlop. The curve is better Dfine frequency drives, the bass are not comic and treble do not pettent ears. The knob depht can intensify the effect but it also adds a boost so he must find a good compromise between the intensity of the effect and the output volume.
I used a Boss DS-2, the sound was good. But I have a T Rex Mudhoney acqurir to replace my boss. I did not test with my wh 10 but I feel that the marriage of two is going to sound of thunder.
Otherwise I use this wah with a Start and a Blackstar HT 5.

I do not hide it, I am a very big fan of mister Frusciante. But this limited solely wah style red hot is a big mistake. It is very versatile. It goes both clean when saturated (can be less with the big distos). I t very surprised its selling price. I was expecting something of the style 150 more. And not only 85 for this gem.
Wah this deserves to be widely known more.