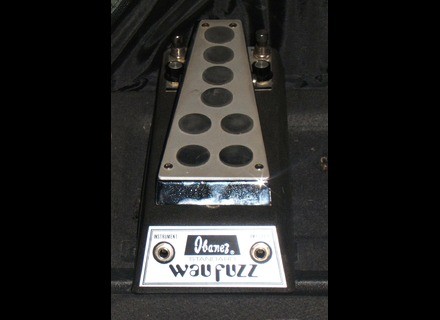 RawDeltaBlues's review (This content has been automatically translated from French)" LOOOUUUDDDDD!!"

Ibanez 58 Wau-Wau Fuzz Pedal
5
Wah-Wah pedal and analog Fuzz (1976 require), no connection to a transformer but there easily remedied ...

A switch to enable / disable the fuzz, another to change the tone of the fuzz, 2 and Depth knobs Balance acting as a gain and volume and a switch under the pedal to activate / deactivate the Wah ...

The Wah-Wah has a very (too) large amplitude between treble and bass, but it's easily rectified if you do not find it to his liking. The Fuzz is very loud, very heavy in "Dark" mode (call it that), it looks like it is coupled to an octaver. In "Bright" mode, it is perfect, big and sustain good screamer for solos Hendrixiens on steroids, rhythm are well supported. I use a Gretsch and Fender amps. At higher volumes it is perfect but "wins" not bad at low volume, it's a pedal scene. A transistor, I would refrain from comments ...

Difficult to compare to other Fuzz, each is unique, but I definitely put on top of the basket with Mica and Russian BigMuff the big time. I use some of the Wah except as a pedal tone (like Jimmy Page I think). Use the Fuzz Wah and at the same time is not recommended, but everyone does according to his taste in music ...

Da_gratteux's review (This content has been automatically translated from French)

Ibanez 58 Wau-Wau Fuzz Pedal
4
Wah wah standard, a PDAL, jack in, jack out and go! VERY robust manufacturing, the one I use, my first dj was using has its beginners in the 70's ... 30 years and still no one erraflure, except may be the black plastic with a little white

No bowl, manual t lost somewhere between 1974 and today) seriousness, y 'there is no need labeled "instrument" on the jack in and "boost" the output, and no knobs, just the pedals, you can not RVer easier ...

But I have not a thing, just may be my amp, a Fender FM212R, when I connected directly between the guitar ampl iet, it sounds not need to plug it into the effects loop of amp ... even when I put 10, it is probably more than my stuff

I use it with my strat USFI affinity and as I was IDIT above, a fender FM212R ... Ben sounds good, I have a good amplitude, but in the down position and the tweeter is trs garish, but must be arranged in rglant the Tone at the scratch or add bass on the amp, in short, the sound is pleasant without being too pronounced, however, than a cry baby ... (Then just may be that dinosaurs is one which is almost twice my age

It's solid, sounds good has it done well and collector tripper to play on a vintage wah-wah (and can be the proud in front of friends who play on any multi numriques rotten MOUHAHAHAHAHAHA) hum ... It was my first silent and I did not buy, but if I had exprience with the choice (MODEL this is no longer available of course) I will take probably and then the cry baby to have an effect more pronounced wah ... (even when I know what gives NEW ibanez lol)

Saint Grawal's review (This content has been automatically translated from French)

Ibanez 58 Wau-Wau Fuzz Pedal
5
Analog Fuzz + trs simple design a reverse wah (bass pedals sticks, sharp pedals over, it's not a mistake, like I have three l.
Between an output, a cover for the battery (no power supply sector.
This time it's the vintage that spot.

Super easy to use.
A knob for the rate of one for a Fuzz effect level.
The snaps like a wah Cry Baby enfonant in the background pedals.
The Fuzz engages with a switch, a switch is deuxime change the sound of the Fuzz.

The wah is fun and the fact that the play requires cblage be reversed ie, the coup there are new applications of wah.
The Fuzz is the main intrt the pedals.
The first mode is absolutely serious with telluric Submitted trs and grain really standard. The deuxime approaches a octavia which s'avre trs be interesting solo.
Hard to believe that the PDAL has thirty years as the sound it produces is standard. Specially true, but standard. Lgre microphone when the same trend.

I use this kind of Fuzz for six years now. I have four absolutely identical with no more than a wah. I did a little Reserved cee such as pedals is no longer manufactured. I just achte prs a year (no kidding), so if I use the breaks, I take another. In addition they do not sound like a copy of the other, each has its personal. I use normment of pedals, including studio, but I never leave without one of my Ibanez Fuzz. (I'm not hypnotize nan
Did you find this review helpful?yesno
»

Dryfe's review (This content has been automatically translated from French)

Switch on a two knob fuzz:
focusing on a fuzz treble frequencies / other low frequencies
A good fuzz cradoque, which strengthens the saturation superbly well .... a hail as we like, with the Marsh ', it dépaute! and Mesa .... Brwwwahhh!

Analog audio-only, 70 years, + the old wah wah
Many of breath, but I must take to repair and cleanage rue Rodier in Paris

9 volt battery, one more look at the old

exchanged against a U2 disc!
I've never seen another or on the internet or in the hands of a guitarist quelquonque a rare and vintage at will!
Ah, glad the Dryfit

Super simple
Editing sounds is easy, of course, and it's solid (she is 30 years old this pedal!, And still works!)
You move the knob, you hear the difference!

Effective!
Adapted .... bah, it should be used sparingly the Fuzz, mainly during the solos crazy
The wah is doing its job, even if it takes time to adapt to control its amplitude-pedal is my favorite!
I aimeuhh!

Used with my Vigier and custom pickups .... it p'tits dépaute!
I couple with a "volume" and welcome!

I use it for 13 years, tried other wah wah (Vox and Cry-Baby), even if others are, that's my baby!

Damage that over time it crachotte-if you find one like it, let me know (to reduce crachottis-and breath in particular)

It goes without saying that given the almost free c't'histoire, I would be willing to trade another disc of U2 for the same pedal!