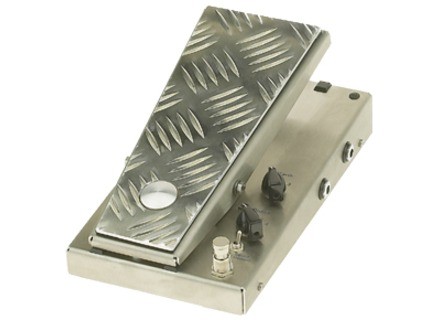 Nedz's review (This content has been automatically translated from French)

The MODEL I possde deuxime is the version of the pedals (Mark II) was released in 2005 by Harry Kurandt Designed and manufactured by hand in Germany. The amliorations made relative THE FIRST version are mentioned where they occurred.

Weight (1.7kg) allows the pedals to be securely anchored to the ground. The chassis is stainless steel, feed. The quality of manufacture are like matrial can not be stronger.

- Two outputs (the same, but situated opposite to each other - convenient because any configuration adaptable pdalboard, also helps out in both two amps)

- Food: The pedals work either with a 9v battery (ACCS simplissime by trapping and no screwdriver) with about 100 hours of battery life, making sure to unplug the jack output during breaks well sr or by mains supply (not included) Boss type PSA.

Slcteur fashion classic wet signal only, and modern dry + wet (the proportion of the two signals is by opening the adjustable pedals with a small screwdriver).

Note the Systm engagement by simply laying on the foot pedals (= sensor located on the round of the rocker infrieure cf. Photo). Systm This patent is extremely efficient and convenient as possible to trigger the effect any level of the race, not to mention the simplicity of utlisation, trs apprciable when s 'acts to enable / disable multiple effects simultanment. Systm new, more effective version of THE FIRST

It is also possible to trigger the effect to let it ring continuously (without having to keep his foot on the pedals) thanks a button switch, which also does not prevent the CONTRL effect so far.

Once you disable the effect switches to true-bypass.

The manufacturer prvu a small hole in the souface to facilitate maintenance of the pedals (dpoussirage) without opening it.

No manual is provided, but is available on the website of the manufacturer and honest, it is not at all necessary.

In short, a high-end wah, wah of the Rolls Similarly, extremely well thought out and who inspires confidence.

Being given the two pots of prsence rglage slecteur and fashion, there are 24 sounds in total which increases guests time getting started but, as with all the wah , is a breeze.

All rglages are intuitive and effective, we get the sound you want the ds Premire minutes of use.

The manual (tlchargeable. Pdf format) is both succinct and prcis. Enough for one pedals like this.

The pedals, trs promising on paper, could have dcevoir its sound. No, in this area (Obviously essential) as it surprises even better as we could have imagined.

For now, I tried it on two configurations. A Marshall Valvestate V8080 (hybrid) and dusts a Marshall JCM 2000 DSL 100 rcent, always with a Gibson Les Paul Standard 90.

Although rich in opportunity rglages, its impossible to find a mdiocre. Everything sounds like it is not allowed.

It's going to sound warm wishes, smooth and quiet, perfect for rhythmic chords at its edge and well never be Submitted for aggressive solos Djante.

Thanks its versatilis it really suits all styles. In short, that of happiness.

L is expressed forcment worse than all the lights but returns all of the same sound quality. In short, it does a good job in that it does not dnature the sound of the guitar, nor that of the amp.

I have for some days (and I do miss coming to an update of that opinion at some future time).

What I like most about the pedals is that I did not blame him!

Except as may be its price (but we will never find a good enough purpose-march and it is widely trs, if only for the effort rflxion that provided the designer and manufacturer rgonomique this wah that sounds her mother: D

I tried a lot of MODELS and it is aisment place in the squad and the head, all levels.

With exprience, I would do without this choice hsiter because it is really a killer!

Musician Sound Design Silvermachine
5
I am a collector of wah-wah. I have over 40, and some are rather rare. But it is this was the most difficult to find.
Behind Musician Sound Design is one man: Kurandt Hardy, based in Cologne, Germany. It is he who makes the pedals MSD unit and hand.
As for RMC Teese, Roger Mayer, the Buddha and other Zvex, these pedals are quite difficult to find as produced in small quantities. The MSD is increasingly distributed, and Hardy Kurandt little bit productive.

To find this model, I first searched in France: not distributed. Then the U.S., no available and is posted on the website MSD they are no longer sold in the U.S. for now, without a distributor. I decided to speak directly to Hardy Kurandt. It takes my order, but ... more news. After 3 months of silence, I decided to restart it. He says he has health problems and it defers my order. Since then, no new ...
So I continue my research and finally find one in stock, Norway! And that's how I managed to get my little miracle.
Also note that there was a production under the single name Kurandt (go see on the site Franco-German Musik Productiv). But no luck for fans, I also acquired the latest model they had left: this pedal is really fantastic and I prefer to have a second on hand in case of failure.

Usage is very simple and intuitive.
Selectors frequency and Q factor are not progressive and have "only" a few possibilities, but what opportunities! I assure you it is hard to beat.
The scale is significant, progressive and effective: a model.
The switchless mode is very sensitive. It is close to the G-Lab system, and therefore more practical than the system as the Morley pedal can be activated in any position. The activation by mechanical switches or system is silent switchless.

Another plus: Four little paws under the pedal can be rotated to fix the screws, the housing to a pedal board. Well done!

One of the best wah I know, at the Roger Mayer, RMC, Fulltone and other Voodoo Lab.
Most of the pedal: his very personal and versatility.

Here we do not find yet another copy of Vox Clyde McCoy, but an original tone, rather vintage.
Earth and Quake selectors are incredibly effective and make this wah pedal with many faces. Again, nothing usual, new sounds and all superb.

Modern mode that allows mixing the dry signal to the wah effect (can also be found on this possibilté Roger Mayer Vision Wah) brings a little finesse and discretion to a wah effect that can sometimes be too little and this subtle . This helps keep some of the dynamics and richness of the original sound. Again, a rare versatility.

One of the best wahs market. Solid, well built, well presented, offering original and sounds great. A must-wah. A factory in Wah-Wah "outside the box and re-fought.

A marvel not found. Almost the holy grail of wah!