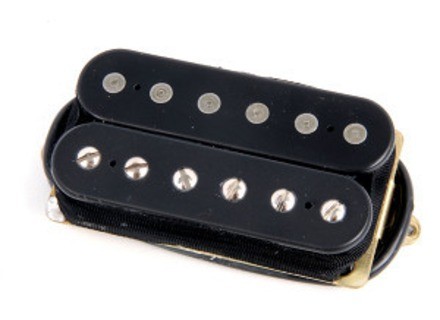 DiMarzio Air Zone pickup. It's a mid-gain humbucker with huge bass response and lots of mid range, which brings a 'nasal' character to the sound. The treble level is very, very low.
I have installed the Air Zone in the bridge position of a 2006 Fender MIM Strat.

Clean: it works if you want a clean sound with some 'nasal' character. The pickup is very clean and the notes sound 'organized'.

Distortion: it works if you want to play metal or hard rock. The distortion gets very tight and the notes sound distinctive from each other, that is, not muddy.

Overdrive: it SUCKS with an overdrive sound. The Air Zone doesn't sound vintage at all and it doesn't sound 'rootsy' nor does it sound 'natural'. It sounds TOO polished for that.

With both the DS-2 and the OD-2, I get a very faithful response to the pedals sound.

The sound of the Air Zone doesn't get altered so much, no matter how I change the configuration of my pedals. Not even the SansAmp alters the Air Zone sound very much, not to mention the CS-3 and the GE-7... none of which brought serious differences. The Air Zone works better if the guitar is run directly in the amp.

Good for metal, hard rock and very, very clean stuff such as jazz. It is just a DISASTER for classic rock and for a vintage sound. I'll give it FOUR because it isn't versatile, it works well with metal and jazz, but sucks anywhere in between.

DiMarzio DP192 Air Zone
4
The Air Zone is just like its name says. It is a mix between the Air Norton and the Tonezone. It combines the Air Nortons sensitivity with the Tone Zones fatness. The Tonezone was one of Dimarzios most popular pickups for the longest time. It has like a super hotrodded PAF pickup. It has lots of mids and lots of low end with crazy compression and harmonics. The EQ on the tonezone is so crazy it kind of sounds like you have a wah on at times. The Air Norton is one of Dimarzios newer popular pickups. It is one of the preferred pickups of John Petrucci. With that pickup you got a more sensitive pickup that responded well to dynamics but was smooth enough for lead playing. With these combined pickups you get a pickup that seems to be designed for a very specific role. This pickup is very very fat. This pickup will thicken up just about any guitar that needs thickening. This is also its downside because it is so fat that it can become muddy and boomy if placed in the wrong guitar. This pickup is made for thickening up the bridge position of a thinner sounding guitar. If you wanted your Strat or Tele or even Ibanez to sound big and fat like an Explorer or Les Paul this is the kind of pickup you want. They make bridge and neck specific models and I do not recommend interchanging the two. Unlike the Tonezone if you put the bridge Air Zone in the neck of your guitar it would probably yield an unusable sound with way too much low end in the tone. If you have a guitar that made with some poorer tonewoods that has a thin sound a pickup like this will do its best to fatten up your tone.

James...'s review"Yes...you too can turn your wimpy guitar into a les paul!"

DiMarzio DP192 Air Zone
5
Okay, I say that aforementioned tagline with a disclaimer. The Air Zone is basically a really bassy overwound PAF with a kick in the midrange. What this means in tech terms is that it can make a thin sounding guitar sound like a big Les Paul. A lot of people will laugh at the notion that this is possible. But I promise you it's true.

I've been a dimarzio fan for a while, but I'll admit that in the past I bought into the popular myth that they were only for metal and only for ibanez guitars. This was fine by me because I was playing prog metal and using Ibanez RG's exclusively. But I digress. I'm getting older and it isn't all breakdowns and solos anymore. I actually like to have my classic sounds now and then. Only thing is I still like the feel of RG's a lot. That's where the Air Zone comes in. The problem with putting a PAF in an RG guitar design is its lack of thickness and mids that a les paul brings to the table. The Air Zone is very aggressively voiced to have huge bass and mids. Basically it's a tone zone with a lot less gain and compression. I used to be a big tone zone fan but like a lot of guys, I found it to be "too much" for lack of a better term. Too much gain and too much of a processed sound. The Air Zone sounds much more vintage. Honestly, the TZ is really more of a heavy metal pickup despite what people may tell you. That's not to say the Air Zone is a low output pickup. It's really not. If you are looking for vintage PAF tone, this isn't it. It's overwound PAF tone. More in the Van Halen camp than the Townsend camp if you know what I mean. It will send an amp into overdrive fairly easily. It cleans up quite well though. For me it's the perfect balance of vintage tone and modern output. I swear if I close my eyes this pickup makes a super strat sound like a Les Paul. Take that to the bank.

Obviously the Air Zone isn't for everyone. It can be disaster in certain guitars. It's a very specific application, but for what it's supposed to do it does it extremely well. Amazingly well in fact.

DiMarzio DP192 Air Zone
4
The DiMarzio Air Zone is basically a Tone Zone with an air gap. DiMarzio puts a gap between the magnet and pole pieces. This creates these real neat overtones that while knocking down the output a bit. It features slugs on one coil, adjustable pole pieces on the other coil, four conductor wiring and an Alnico 5 magnet.

This pickup is really only a bridge pickup, in my opinion. DiMarzio says that it can be used in the neck, but it’ll be very powerful. You’d need a super hot pickup in the bridge to help even everything out. It’ll also be ridiculously bass heavy in the neck, too. This pickup features a very strong bass and midrange. It’s a reincarnation of the Tone Zone, after all.

If the Tone Zone was too compressed for you, and you wanted a bit more touch sensitivity, this is the pickup for you. DiMarzio claims that this is great for hot amps. While it can work with hot amps, this is still a pretty powerful pickup. If you’re looking for a completely clean pickup, you’ll probably want to look elsewhere.

For those that have never used the Tone Zone, it’s got tons of bass and mids. The bass is fat on the wound strings, and it never thins out on the treble strings. The midrange on this is very heavy, almost to the point of having a cocked wah sound. Treble is pushed back a good bit on this pickup, as well. If you have a fat sounding guitar, I don’t recommend this pickup at all. If your guitar is neutral to bright sounding, this’ll most likely fatten things up enough. I find the Tone Zone to be a bit cooler sounding, but if you want a slightly classic take on the Tone Zone, this is the pickup you’re looking for.

Did you find this review helpful?yesno
»
Read the 12 user reviews on the DiMarzio DP192 Air Zone »