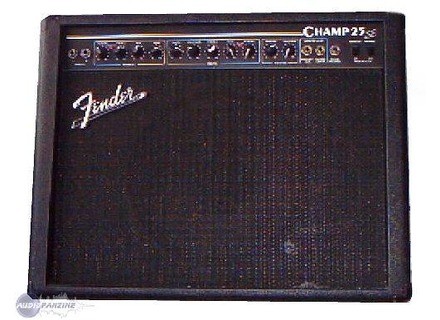 Fender Champ 25 SE
3
Fender has made an amp that uses this new idea at the time to fuse digital and tube sections in one amp. This is one of those experiments that they decided to go with. It was a good one at the time and that should be commended.

Music Man amps did amps like this in the 80's and it was pretty successful. This amp is one of the amps that had a hybrid technology where you have a solid state preamp section and a power tube output section. This amp takes the tone of the vintage champ amps from Fender and adds a modern twist of tone shaping and features. You have a preamp tube for the phase inverter and then two power tubes.These were a step above the technology of that day and were extremely modern for their time.

I like the tone of most American made Fenders and though it is solid state in the preamp and the power amp tubes do cover up the harshness of the solid state tone. This compliments the nature of the amp quite well. The clean is very Fender sparkly and jangly.

I always like Fender amps with a good Fender Stratocaster or a Fender Telecaster. They just go perfect with one another. One thing that bugs me on this amp is the effects loop on the front panel. Any amp that does this like some Peavey's just bug me. Having multiple cables running in the front of the amp plus a mic if you are using it live just looks tacky.

Well you have to search the used market for one of these now a days. I have seen them on evilbay for about $200. Now a bad price for this type of amp. I like that these amps were still made in Southern California. These amps were such a departure of what Fender would normally do. It was a hit with some people who weren't Fender fan-boy's because those guys just want the classic style and tone. This would have appealed to the persona searching for something more or just something different to them.

I would recommend this to any one who needs a good practice amp and doesn't want to break the bank to buy it. I suggest trying it out first before buying because the voicing may not be your thing.

Morby's review (This content has been automatically translated from French)

2 jack:
- One that sends a snapping sound
- One that provides a more muffled sound
I can not tell you if it's a guitar or not active micro ...

On the clean channel: a "mid shift" less aggressive button down a bit high mids, with a softer sound

The line output on the rear does not mute the HP amp is not the case everywhere for what I said.

I have a strat, it fits perfectly with this amp in the clear, no need to fiddle with the knobs for 107 years until it sounds.

As against the overdrive channel is "totally crap", so I quickly bought a SansAmp GT2 after to compensate for this (big) low, hence my rating "6/10 right"

I am a huge fan of the clear sound I get with my Stat and this amp, pure Fender, hot and banging, perfect for blues or pop-rock, jazz pkoi not also (this is not my register indeed).

Bought new in 1993 when I started playing (without experience), I used it thoroughly for 5/6 years before then buy another combo bigger, more powerful, stereo, home made by a friend. But next transportability it became problematic. So I'm back to my old Fender lighter and compact.

2 entries Jack and the Send / Return to start messing around, I took him for review in VHM in Paris beginning in 2013 for a small check-up. In passing the 12AX7 was replaced by Electro-Harmonix and HP replaced with a Celestion Black Shadow had given me a friend. Result: I rediscovered my amp ... in much better!!!
The clean sound is even better than I remembered. More importantly, the overdrive channel has become exploitable! I'm not saying he is not insane, but he still sounds pretty while before it was shit.

THE BIG FAULT: Reverb has a nice sound but is placed after the preamp and BEFORE the send is super idiot I think!
Since the loop I have my SansAmp and a Nova System which integrates two preamps, I am forced to ignore the reverb from my amp (which ultimately is not a problem because I have super reverb on the Nova System)

Is what I would do the purchase?
- For my champ25 in its current state with the mods: yes without hesitation, I love it!
- For non champ25 origin, because there other amps "all-tube" that better sound origin, gender Peavy Classic 30.

Easy to use, no manual, its easy to get clear

The channel is very clear sound correct. This very bright and slamming it easy to change settings on playing volume, loudness, treble, mid, bass are accurate.
The reverb is good.
We can either put the volume up and play the compressed audio loudness for a crunch and the reverse for a very clear and slamming.
However the bass is very low.
The sound channel is saturated (in my opinion) useless.

I bought this amp mainly for clear sound it provides.
Coupled with a strat, fender sound is there but mainly in the registry clean snap.
The connection is complete, the receiver. reliable, value for money is good.
Lack of bass sound unusable in its saturated its major flaws.

for good sound I use a SansAmp pedal plugged directly into the power amp with just the output of the loop.

this amp was bad for me with good distortion sounds clear but not very typical Fender "too neutral". Equipped with a Start I never found the sound of approaching my idols Hendrix SRV etc.. I first thought about selling it but it was a gift I ended up out of the closet and change it to get the sound I liked.
Step 1 change lamps, one ECC83 and two 6L6 GC Muller Electro harmonix.
Resulting in a true tube amp sound very round and warm, this was not the same amp.
Step 2 as I finally decided to optimize the maximum I exchanged the HP by a Jensen C12N "for its true Fender."
Now I am filled, the amp is powerful, it is much more power, ideal for playing in groups, precise and crunch from hell, to counsel for the Blues.
For all those who have tried it do not come back "me neither".
A tip for those who have this amp, the first thing that costs nothing is to set two pots at max volume and to manage the sound with the loudness knob which is only master c is from 5 that the sound is warmer and round, for the rest if you like me a good strat play with the volume of the guitar.

Did you find this review helpful?yesno
»
Read the 8 user reviews on the Fender Champ 25 SE »