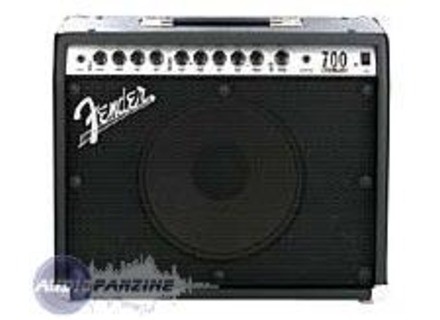 Fender Roc Pro 700
3
The Fender rock pro 700 amplifier is a hybrid amplifier features preamp two tubes but a solid state power section. This is a 70 W amplifier that can crank out some very loud tones. If you've ever had any experience with a solid-state amplifier especially one that has over 50 watt then you know it's going to be a very loud amplifier. This amplifier also features reverb and a good little foot switch to switch between the clean and distortion channels.


The tone of this guitar amplifier is decent for the clean tones. See you can get a good Fender clean tone but you're going to suffer is the distortion tone. Most Fender amps overall cannot really produce a good overdrive or distortion tone. Their clean sounds great all the way up to blue sounds when it comes to high gain distortion they really lack in this area. So if you need a good distortion channel , then this is not to be the amplifier for you. It's cool idea with a hybrid technology but overall I prefer in all tube amplifier.


These guitar amplifiers are not that common but you can find them pretty easily and the used sections of classifieds but especially on eBay. They're very prevalent on eBay so that is where I would start your search and looking for this amplifier. They're cool amplifiers for the tone of the clean but other than that it's not that big of a deal. You can find them for right under $200 which is not that bad of a pick up.
Did you find this review helpful?yesno
»

fry_'s review (This content has been automatically translated from French)

The settings are simple, we quickly punchy sound. Ideal for rock, blues, hard and get involved (large distortion inside

It is great for rock and blues, and it sounds as good with the US Start with the gibson SG. I still use another distortion (Boss OS-2) as that of the amp is good, but metal (not enough bass ...)

I have a few months and it's a very good amp. I intend to change to move to all-tube, but it hurts me to not keep it as a booster amplifier to play tranquillou home. It sounds great even at low volume.
If I could afford to keep two amps, I do not part with it.
Did you find this review helpful?yesno
»

wil4linux's review (This content has been automatically translated from French)

The config is simple, the satellite channel depends on the mic the guitar, a big difference kan gu I switched to DiMarzio pickups epiphone. (Fred and paf pro)
Pr config you will find the manual ke ds g found online (bah vi, c jlavé ...), not a pdf doc.
There are examples of setting qq EM it is not great I think ...
we must find its own sound, after that rolls

Personally, I like the sound, especially in clear, sharp and has beautiful if I put 8 c because the bass is blah, ie must kil them up too, I never exceeded 3 (the pr 2CH) not so good after c .

I've had the one year, keep jpense it is very good info pr c a model that is more fabrik. he was replaced by the frontman series (which is very good too), g see a rock in the store 1000 EM remains rare ds trade.
pr the footswitch (which is not supplied with n) jle paid about € 50, g of the fender ordered from, as a football specifik c to this model.
jmen the scene is pr, pr repeats', sending it well, its a more focused ds treble (just typed blink). g bcp not try to amp ds my life, jle paid € 250, if c has been re-I refer the choice.
Fri jle if one day it will be pr surment just over Watt
c is a good choice, me tried scratching it with your purchase before the
Did you find this review helpful?yesno
»

Arbaal's review (This content has been automatically translated from French)

Fender Roc Pro 700
4
Roc Pro 700 Amplifier:
Tration 70 watts (I stress tration because he spits really (too) hard to the 70 watts)
Preamp with a lamp
Transistor power amp (the Poweramp is sensitive enough, we feel that it is nervous: p)
2 channels: Clean / Saturbr />
I personally have never needed more than two channels, but its been 2 years and even though I still want to taste the crunch time to time ^ ^

To use it is quite simple, there is a good sound quite naturally, just need to turn the knobs, just manage the Equaliser and it's perfect, there's a reasonable trs!

BUT: the volume is sensitive enough, usually above 3 and drummer we hear more lol!
So rating: 8!

I also noticed that for a combo quip mostly in the transistor, it appeared very well in recording (that all the transistors have not) and can be seen live trs trs well as the middles of the amp are that we hear you trs well, as they pierce the bass / drums ...
It is a big plus trs has not ngliger when making the scne / studio

Otherwise I play ska / reggae / dub, and the clean sound I said, Hat 100% perfect!
But Jazz / Bossa and I told her the clear: 200%! Even better than perfect lol!
I play pop / rock / blues Mmhhh channel has saturated t done! Go 150%!
I play a lot of metal: Ahhh's when we had the chance to play at all says a good lamp or not the purpose of this amp either, but it was in April that I ' t have quite surprised by the energy that one could feel, it's really trs reasonable, it sounds good enough for the speed metal: p (Rhapsody in this kind of what ^ ^) a condition of be scratched with a micro high output biensur, it is clear that with a Telecaster it will be harder ...

Brief sound like a lot, that little sound is both warm and crystalline fat or light depending on the settings!

Finally an amp that is not perfect, far from, but even when I had all the amps prfr Marshall / Behringer / Laney a transistor that I could test ... (T me that anti fender AT THE TIME .. ah la la ^ ^)

It's been two years since I used
I test a lot of amps before jumping on this one!
The ratio quality price is hard to describe ... The price new: Nearly 500 new (or the store I bought it but that price you can find a small tube amp used, which may be better for some styles ...
But it is true that nine I do not see how could have done better!

8 Go here because if you look at the second hand market where you can find even better: p (even if I admit that it's hard hh: p)
Did you find this review helpful?yesno
»
Read the 9 user reviews on the Fender Roc Pro 700 »