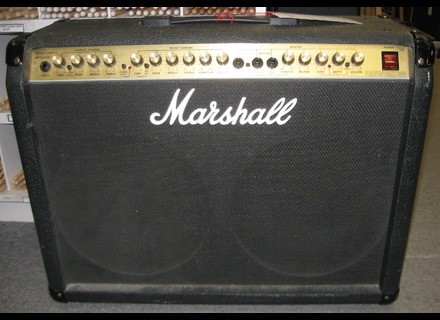 Marshall 8240 ValveState S80 Stereo Chorus
3
Not much to add (solid-state, pseudo hybrid ....clean channel 100% solid-state, OD channel with a marshall 12Ax7 tube).
It's a pity it doesn't feature a headphone out or a speaker out to connect it to external cabs, with hindsight I would've really appreciated it. For the rest, it's really comprehensive and versatile.

I used it live and for rehearsals from 1995 until 2006 (when I switched to a Jcm 900 MK III 2100 model...read my review).
Since 2006 I use it for my home studio or to do other jobs.
I've played with alternative, pop, rock, and metal bands...and it has always fit well.
It sounds all right at low volumes, especially the OD channel.
I used it again several years ago for a gig in a small venue...and it was catastrophic!! I'll never do it again!

As soon as you crank it up a bit, it turns shrill and lacks warmth...a 5-watt tube amp sounds better.
It doesn't make me feel anything ever since I've been playing tubes...
Back in the day, tube amps were inaccessible, they were really expensive, that's why I chose it...there were not many options!!

It's okay to start out with and not go broke, but you'll quickly need to move on to something else. Avoid using it for gigs, unless you play at low volumes and are amplified via the PA.
Go for a tube amp as soon as you can.

- Solid-state sound
- Sound is degraded at high volumes
- Weight
Did you find this review helpful?yesno
»

You plug in, turn the knobs and play...

To me, this amp is a must for death metal, I have never heard an amp that can put up so well with low frequencies.
It's incredible. I tune to A, with 13/64 strings, and have no muddle, no trembling speakers, nothing, it behaves impeccable.
In terms of distortion, I use the OD2 channel, which is really mind-blowing. It's powerful and relatively light at the same time.
I use Seymour SH-6 SH-8 X2N at the neck and don't have the slightest need to connect a single pedal to have a additional gain.
To give you an idea, when I connect a Metal Muff, I can hear no gain difference whatsoever, except for some extra gain in the high end.
Do note that, like with many Marshalls, the mids and treble controls aren't as good as the bass one.
The pots crackle when you turn them, but that's quite normal for a Marshall.

I've been using it for about 3 years and I had several amps before, including a peavey bandit 112 and a marshall amphead with an 8100 cab.
The bandit 112's speaker vibrates at loud volumes with a standard gauge and the 8100 lacks punch, I had to play with a pedal, but I used EMG 81 and 85 with this amp, it was way less powerful than with the SH8, which may skew my judgment.
I love its punch and its particularly metal sound. The amp responds perfectly to low frequencies and thick string gauges (I use 13/64).
What annoys me a bit is that the reverb sets off at 10 on mine.
I have never really cranked the volume all the way up. The most "extreme" settings I've used have been with both the boost and the master volume at 4, and it already kicks ass.
Then again, it's only 80 watts, so it's not the best to play with a band.
It maybe okay to play soft music, but to play death metal you'll need at least twice that to be heard over a drummer who plays like a real death metal drummer.

Metalheads should go for it, you won't find anything better for the price.
I would eventually like to compare it with a LINE 6 Spider, but I don't think its speakers are of such good quality, even if I know that the latter has a more modern and cleaner distortion than the Marshall.

Do note that my reverb only works when set to 10, which means it sets off at full throttle at 10.

Marshall..
Did you find this review helpful?yesno
»

Marshall 8240 ValveState S80 Stereo Chorus
4
I bought my 8240 from a friend of mine who runs a studio. I needed a bigger amp to cope with gigs and regular studio runs and this marshall was ideal. I payed £200 for it which, for what you get is pretty damn good. I have seen cheaper ones around but i managed to find one in good exceptionaly condition, although it may need a good service.

It's an amazingly heavy duty, its from an older marshall range which means it would be built well. The stereo chorus gives such a warm rotating feel. The reverb is responsive and not too OTT. It has two channels (footswitchable), both channels, clean and overdrive really do give ya a kick in the back when ur standin in front of em. 2 X 12 Eminence speakers which are very versatile, producing everythin from a warm flowing sound to hard hitting roars and screams. They handle all gains/volumes on 10, even most celestions dont manage that.

erm...well when i first got the amp i was concerned about a slight electronic hum (i mean so quiet you had to stick head inside the cab), the amp has been through a few years and needs a service which probly would help quieten it down, its probly nothing, im picky lol. The inputs could have been metal and not plastic, it could have been set on casters (its a bitch the keep picking up and moving with one handle at the top), could have had a few more AUX outputs ect. finally the effects loop in it seems to cut out half the volume of the effects when you put any pedals through it. craazy, didnt bother me as i just run into the input.

As far as quality and construction goes, its a Marshall! not really much else to be said. 98% in my opinion

It's as easy to dial in as any combo.
Channel 1 can be used for clean or crunch sounds (a light crunch). There's 1 pot for the gain + 1 one clean/crunch selection button + EQ bass-mid-treble. Enough for the clean section.
Channel 2 can be used as OD1 or OD2. There's 1 pot for the gain + 1 OD1/OD2 selection button + EQ (bass-mid-treble+presence) + 1 channel volume pot. A good point is that the OD channel can be perfectly in balance with the clean channel thanks to the channel's volume pot.
I don't use the effects loop, since its "parallel" design will always let "through" part of the unprocessed sound. So you end up with a "wet/dry" mix.
The Chorus can be adjusted in terms of speed and depth..
The reverb has one control. A small drawback is that you can't activate or deactivate the reverb with the footswitch. Which means you have to do it by hand in the middle of the song. Not the best option live.
Its power is enough for gigs in small clubs and venues, but compared to my 50-watt Hughes & Kettner tube combo, it's not really that powerful.

I have used it with an Ibanez JEM555 and an Epiphone Les Paul equipped with Seymour Duncan (SH1&SH2). Not too bad guitars, I'd say.

The sound of the clean channel has no personality, no life. That's not the main asset of this sort of amp. It starts to crunch slightly when you crank the gain beyond 13. That's about the only sound I like about this channel. I have never used the crunch mode, which doesn't crunch that much and lacks lots of warmth.

The OD section is much more interesting thanks to the preamp tube. OD1 is a rock OD, nothing exceptional, but quite usable. OD2 has a much more metal sound, with significantly more gain. The latter is much better (for metal). I've tried several pedals with it and always keep coming back to Marshall's OD. But it's impossible to give it some warmth. Even with the lows and presence all the way up, it remains shrill.

The chorus is simple but it doesn't sound bad at all.

The reverb sounds fine, too, but it's not easy to use live (no footswitch).

The two Celestions reproduce sound fine. Especially when the Chorus is engaged with rate+depth at 0.

I've had it for 15 years. It still works fine, despite the multiple travels, which makes me think it's sturdy. I haven't used it since I bought an all-tube amp. The difference is huge.
I bought it when I began playing electric guitar, without trying out any other amps. I was young, starting out and wanted a Marshall... With hindsight, I can now tell its limitations. It has a typical metal sound and it isn't great for other styles. It is too shrill.
Given my evolution, I wouldn't buy an amp like this now, but back then it was of great use to me (when I was a metalhead). Right now you can find all-tube amps with much more warmth and a better dynamic response, a better overall sound, for the same price.
Did you find this review helpful?yesno
»
Read the 14 user reviews on the Marshall 8240 ValveState S80 Stereo Chorus »