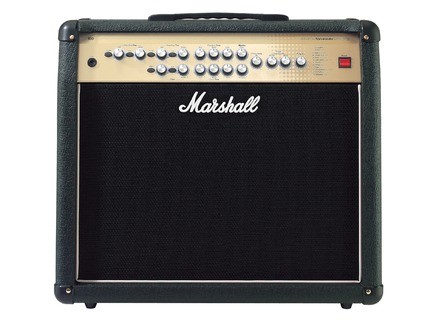 fabienstreit's review (This content has been automatically translated from French)

A whole range of modlisations Intgr Marshall and effects, all without breaking the head either.

It is easily the sound that is sought. It is a complete amp trs, that explores a lot of sound diffrent, and thus enables to play several styles without problem.
The doc is not useful for the simple reason that the amp trs are easy to use. But for those who want to go far enough in rglages and really explore all posibilities modlisations and other effects, it is clear trs.

It will be all styles of music. But Obviously, Marshall requires, it will be well suited to the sounds particulirement Rock. Whether the good old rock and roll the old and sounds more modern.

In all cases, there is a sound warm enough, thanks pramplification lamp. It Pali aisment enough to the sound decays found in this range amp "all transistor" in competition.

It has a crystal clear sound and warm, which can easily turn into his property crunch by pushing the gain. And if we go in saturated when the button is nirvana (or so) because it is the Marshall sound, bold, hot: POWERFUL.

was a year since I played with in room rpetition and concerts in rooms of average size, and is happiness. He never wavered, and a pure sound. Then coupled to a good distortion pedals, or better, fuzz (like Big Muff) then sl I can not tell you

In any case, in my opinion the best quality price its class. Have a sound as warm for less than 600 ... Thank you Uncle Marshall!

If I had to buy one today, I would do the same choice with eyes closed.
Did you find this review helpful?yesno
»

jimmy216's review (This content has been automatically translated from French)

The grip is quite simple, over a manual is provided with a page showing the last several possibilities for settings as styles of play For example, I tested the config by accident british rock is proposed in the manual and I was not disappointed: it's low volume and thunder on stage I do not even speak.
The presence of a switch for the effects of modeling is very nice for an amp of this price and is very often.

Breff different examples can be done by hand and soon we know how to adjust the amplifier according to a particular song.

In terms of sound I was very, very surprised but then. In fact, the amp really sound unlike marshall MG series that sound dirty and indefinite. In addition to the aging of the lamp and good settings gives an almost vintage sound could not be more pleasant.
It is regrettable however that the clean channel is not up to the distortion. I blame him for his side dish that is perfectly adjusted to the JVM and JCM series.
Side effects modeling can be both surprised and disappointed. Indeed, the reverb is beautiful, she's really Floydienne Pink! Similarly, the chorus is quite nice. By setting aside is not against top: two buttons with one to adjust the intensity and the other to adjust the percentage of signal. So I can say I like the effects but not the settings.

This amp is definitely worth its weight, due to its ease of use and its sounds very nice. Modeling the effects are mostly amazing and are handy to replace a few pedals from time to time.
I am disappointed against the sound power supplied, in fact it is a 100W that has everything except a 100W audio power. The sound can still be strong enough but not enough for some scenes ...

If I had to redo this choice I do it again without a doubt, Marshall is a great amplification and proves without a doubt in this amp.
Did you find this review helpful?yesno
»

Marshall AVT100X manuals and other files