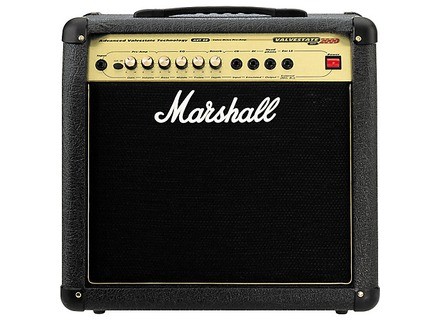 Product replaced by the Marshall AVT20X.

All user reviews for the Marshall AVT20

Average Score:4.7( 4.7/5 based on 6 reviews )
Audience: Beginners
Not satisfied with those reviews?
Our members also liked:

Marshall AVT20
4
I bought this amp in Colorado Springs about a year ago from Pro Sound music for $279. I originally purchased it to use for rehearsals and recording.

I love the portability and the absolutely awesome tone of this little amp. The range and depth of tone is really remarkable for an amp of this size and price. I have since been using it at small gigs and some larger rooms with a lot of success. Nobody can believe that this amp is producing all of that sound.

Wish it had channel switching and was quiter in the gain mode. It is really noisy with the gain switch on.

The construction is like every other Marshall I've ever owned--SOLID ! Quality is way above the level you would expect for under $300.

All in all, if you need a small amp for small gigs, rehearsals or recording use and still want that Marshall tone, go buy this sucker! Oh, the DI is speaker emulated, so you can go straight to the board or snake ( it works nicely I might add as I have used it on a bunch of gigs ) and the headphone jack is nice for working out parts without disturbing anyone at 2 am.

Marshall AVT20
5
Acquired this amp from Promenade Music in Morecambe; actually traded it for the Fender Princeton 65 amp that I'd had before which really sucked, though I guess that it wasn't meant to be used for Metal music.

Superficially this is a great amp - compact and sturdy; the control layout is just what I wanted - simple and easy to use. The amp is only one-channel, but the sound you can get out of it is really good - nice clean sound, which unlike
all-solidstate amps (which are shite by the way) is deep and thick, not brittle-sounding, which was what I hated about the Fender Princeton. The reverb has the same thickness and depth about it - you can really saturate it if you want to, but even a low reverb setting (I put it on about 4 out of 10) it makes the sound SO much better.

Overdrive channel on this Marshall is very good, considering that every amp I've used so far (I haven't used any really big all-valve amps like JCM's or the like so I can't speak for them) has needed a distortion pedal between it and the guitar to get a gig-worthy overdrive sound, but this one could probably handle it without the Metal Zone pedal I use, and the closed-back cabinet and ten-inch speaker give it a very good, ballsy punch. In any case don't forget that only the PRE-amp stage is valve and the power stage is still solidstate, so don't expect to get exactly the same sound as an all-valve amp without adding a pedal or two.

It does have some other good stuff though, and the emulated DI output is great for recording stuff, all I do is run a lead from this output to the 4-track and bingo.


The only real bitch is the lack of footswitching ability, which would top it off although this doesn't bother me as I use a Metal Zone (look for my review of that on this site); also an effects loop would be great, but what the hell, this is a very low-price, and LOUD amp with a great sound, and let's remember that it is only meant to be a rehearsal amp and not for gigging, even though it is more than capable of doing so.

Great - it's been transported in cars, (hundreds of miles sometimes)and lugged around a lot and there's never been a problem. The cabinet is built like a brick shithouse, and all the usual things are there - sturdy handle, hard plastic corner-caps etc. Very sturdy, and much more so than an open-back amp as the speaker here is in no danger of being whacked.

The only thing I'd say is add somethig like a Metal Zone pedal (or any other good distortion pedal) so that it runs:

This has put an end to the three-year search I had to make for the perfect setup. The amp also gives great feedback at high enough gain and a reasonable volume setting, so all in all it holds up the Marshall name really well.

Marshall AVT20
5
Ive been playing guitar for about a year now, and ive been using a 15-watt squier amp since i first got my guitar. One of my friends had this amp, and the first time i played it, I knew i wanted one. Well my birthday finally came around and i went to Mars Music and bought the last one they had. Unfortunately, it was the display model, so i paid about $275 for it.

This amp is perfect for what i need. Its small enough for the bedroom but can put out plenty of sound if i need it. Since this amp is part of the AVT series, its pre-amp is based on a real ECC83 tube, so it puts out the same tone as an AVT150 stack, or any of the other AVT amps. Ive used this amp to record a few songs, and it sounds amazing! Even with my crappy squier strat i can still make it sound just as good as my favorite bands guitar.

The only thing i dont like about this amp is that it doesnt have an input for a footswitch, Other than that, its perfect.

This amp is built very well, i use it as a seat all the time and nothing is loose or anything.

THe Marshall AVT20 is the perfect amp for someone that wants the genuine Marshall sound without paying the traditional Marshall price.

It is the superb clean or we see that the hybrid amps are the best among the lamps and all transistors!
A good hop and heavy distortion mtal! a small distortion? hop and rock!!
Cepandant give a little bit of gain when you start to overdrive channel to restore dla fishing!
I Cepandant meterai as 9 because I find the reverb a little too sizzling for my taste.

It'll be a year since I use it. Perfect amp for repeat in a cushy home but avoid group enough level out the friend! but hey I note that jsute jai mang a MG100W with my overdrive channel of the AVT ... it still leaves not shoot!
It's tough!
Did you find this review helpful?yesno

fred45's review (This content has been automatically translated from French)

I-beginners and I immediately found the sound I was looking for, really trs simple, I is not the record with them, but trs trs simple!

-You can play with all the style, a super clear sound does sound distortion of excellent quality!
Me I'm plain metal and I really do!

- I use it for 3 days.
Trs-simple gnial used for beginners!
Trs-Price is right over its quality!
-I would do without this choice really hsit gnial!
Did you find this review helpful?yesno

Devast's review (This content has been automatically translated from French)

I had not yet bought new manual!
Any way I frankly did not need it.
It's not rocket science with the equalizer, gain, and volume.
the little button on the left c is to change the channel ... short simple.

Already good sound when you play with one senses that it is of Marshall, there is no comparison. (Already a good sign)

- Canal clean: it is the highlight of the beast. The sound is known to be warm and crystalline. This is where we feel that we have the preamp a lamp. It's really good at this level, nothing else to add.

- Overdrive channel: Oh by the cons .... while drinking a good old blues or rock do not even think about it for the metal. Can not have a big sound interesting. In most cases the distortion s'embale and loses its sharpness.

Overall it is a proper amp.
One could blame him a bit of a lack of sharpness throughout.
It costs about 350 and it's been a year since I have it.
I also use a fender (all transistor) at the same price but I do not find that warmth in the clear.
The AVT-20 is a 20W on which you can easily work on but it is a banned group because when the volume is growing much (I mean a lot!) The sound quickly becomes bad. And yes it is not light!
It deserves, however, are well 7 / 10 gnral.
Did you find this review helpful?yesno
Cookies help us improve performance, enhance user experience and deliver our services. By using our services, you agree to our use of cookies. Find out more.