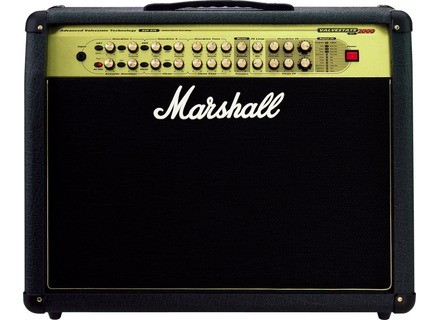 Product replaced by the Marshall AVT275X.

jarvis_steven's review"I use this amp daily!... But It's not a tube. It's a solid state"

Marshall AVT275
4
Marshall's Avt275 is a "ValveState" amp.
"ValveState" is a cool word for an amp that has a valve pre amp and a solid state power amp.
Basically, it is just a solid state that sorta-kinda-almost-sometimes emulates a tube amp.
It has a clean channel, two overdrive channels, and an acoustic simulator channel. It is equipped with a multitude of built in effects ranging from a couple of reverbs to flange and chorus.
It pushes 75W through each of the 12" speakers and it also has an "Emulated Line Out" that supposedly emulates the sound of the amp if you ever have the need to record it D.I.

The amp sounds great. Period.
My favorite thing about it has definitely been the versatility.

Both of the O.D. channels are usable. The first overdrive channel can give more of that old school crunch and classic Marshall Sound. The second O.D. is much heavier and I rarely use it. It can get out of hand very quickly. It easily becomes muddy and silly.
BUT...
As far as tube-like sound is concerned...
The amp absolutely under performs and will absolutely disappoint you.

The acoustic simulator is a joke. Don't even bother.

I have to give it a 9 in the Utilization category because of the versatility. I have used this amp on Punk records, blues records, indie, and reggae.
It is a solid choice no matter what it is doing.
The idea that it was supposed to be a decent substitute for a tube amp is ludicrous. Luckily, I bought it when I was so young that I didn't know the difference and therefore had no prejudice towards the claim.

I primarily play a Schecter Diamond series.
It has a pick up and a humbucker, both are Duncan. It is a fantastic guitar but it has been through hell.
The plates for the control knobs are noisy and useless because of my need to quickly repair it with a sauntering iron.
It doesn't make sounds unless all of the knobs are all the way up.
Hence my surprise at the AVT275's versatility.

The Clean channel is perfect.
O.D. 1 is good.
O.D. 2 is usually silly.
The Acoustic simulator is useless.
The built in effects are actually O.K. but you will have to dial them in to the point of questioning whether or not any of them are really worth the time or effort.

I did a review on this amp a while back and I spent a whole lot of time talking about the "Emulated Line-Out" that is on the back of the head.
All that you really need to know about it is that you should just be miking the cab. It is basically just another headphone output and it sounds nothing like it claims.
Without the twin Celestion speakers to shape the sound, everything falls apart.

Again, being able to control the sound as much as you can with this amp(without using stupid effects), is truly fantastic.
But, all of the cool toys and gizmos and gadgets basically add up to nothing more than a waste of space.

It sounds great. Just remember that it is an amp- not an effects station.

Pros:
-Extremely versatile
-Can take a beating like a Marshall should(and probably will)
-BEAUTIFUL clean channel
-I noticed that it was one of the amps on stage at the end of School of Rock
Check it out:

Right behind the guy with the Flying V.

Cons:
-Silly toys and effects
-Acoustic simulator is just nonsense
-Sounds almost nothing like a tube amp
-Unusually heavy for it's size

As far as the price goes, you should definitely buy it used so that you have a chance at a reasonable deal. I am not sure whether they even make these anymore so it might be your only option.
I see one on Ebay for $500.
Considering the Clean channel and the versatility and the power(yes, it's frickin' loud), that is a reasonable price.

I use this amp every single day.

Marshall AVT275
5
I was looking for an amp with some good overdrive, excellent tone and a decent power output. I found it in Music Maker here in Dublin, in the good ol' Republic of Ireland. I paid 800 Euros for it, a bit pricey, but I was happy to part with it.

First off, its a Marshall, so it will definitely be a favourite for most guitarists out there. I didn't buy it for the Acoustic Sim as many people who buy it do. I bought it for the OD Channels. The OD1 is fantastic for the sound that made Marshall famous, good old Crunch, just about any crunch sound is achievable from it. The next step up is the OD2, where the gain is far more sensitive and a lot bassier than its predecessor. Good for extra ear drum pounding action for all death metal fanatics out there. All in all, excellent output. The Clean Channels are not to be snubbed though, the Acoustic Sim is good for not needing to switch guitars in mid play, but the volume on it is equal to half that on other channels, and the Clean Channel itself does incredible clean to a nice Bluesy break up.

Not much, the Acoustic Sim is weaker than the other Channels in terms of volume, thats about all I dislike. Other than that fault, it's a great Amp.

Rock hard construction. The combo's closed back gives a fantastic Bass response for the Clean and OD's. But a complete retard could ruin this by opening it up for a look, sealing it back up, and doing a real shit job of it. Always leave an amp untouched but by an experienced technician.

Marshall AVT275
5
I got this amp six months old off a well known internet auction site for £345. It retails for £560 - bargain! I bought it because I was looking for a powerful combo for gigs.

I love this amp. I looks brilliant, and the range of sounds you can get out of it is frankly terrifying. The four channels - acoustic simulator, clean, overdrive 1 and overdrive 2 range from jangly piezo acoustic to the most metallic metal. Each channel has a seperate gain and volume control, so the channels overlap nicely. There's a master volume and master prescence knob, too. There are two FX channels - one for acoustic simulator / clean, and one for overdrive 1 and 2. These sound really good, especially considering they're inbuilt.

This combo weighs as much as a small cow! It doesn't have wheels, either, so get a roadie, or get down the gym. Also, the power cable is only about a metre long, so it needs to be close to a power point. The number of knobs on the front means that you'll have to be on top of things if you want to change settings during a gig.

I think this was actually hewn out of stone, or perhaps made from the remnants of a collapsed star. Everything is sturdy and possibly bomb proof. Some of the knobs feel a bit wobbly, though.

If you've got the cash, this is a brilliant amp. The range of sounds is great, and it is loud enough to fill a decent sized club without needing to be mic'd up. Genius!

Required a "versatile" amp, for clubs, pubs and large venue work. Looked at the Marshall DSL/TSL and Fender Hotrod Deville. Read an article on the AVT Series so decided to have a listen to the AVT 275, Marshall's AVT Flagship. What an amp, well O.K. compared back to back with the DSL or TSL it lacks a little, bit in a live mix it really does cut it.

Versatile tone , and all shades in between. That doesn't seam to suffer the sound wave clipping problems of many solid sate amps.
75w stereo ( 150w) through 2x specially designed celestion 12" speakers, sealed in an enclosed cabinet. Driven by a hybrid pre-amp, 1x ECC83 (12AX7)dual triode valve.
4 channels clean,acoustic sim, OD1 & OD2. Clean, OD1 & OD2 channels have independant gain and volume controls and bright or scoop buttons. While the acoustic simulator channel has a depth, body and volume control.
The clean channel is one the amp's best kept secrets, crank the gain right up, add a touch of EQ and reverb to taste, sit back and soak up the tone of that 12AX7 singing like an angel. If that doesn't float your' boat try OD1, from crunchy rhythm to full on blues. OD2 does what Marshall does best, Hendrix drive to " all hell's broken loose" harmonic scream.
Acoustic simulator, another good solid usable tone, sparles with single coils but humbuckers add that touch of "dreadnought body" tone.
16 on board effects, sales gimmic or after thought ? Who cares !. They sound good, "very" similar to Marshall's range of stomp boxes !.The Controls have been integrated into the amp with such simplicity you won't need to open the manual ( or get your kids to show you !).
A presence control, on a solid state amp, that does what it should, what ever next.
Emulated line's out (Stereo)
FX Loop (Stereo)
Supplied with a 6 way foot switch


Not a lot.
It's heavy ( small price to pay for the tone ) and easy solved with a set of castors or a roadie !
The gain on the acoustic sim channel struggles to compete with the other three channels. However can be over come by prudent use of the master volume.

It's a marshall.
It's heavy
It's solid

I own a number of amps including a couple of old valve amps. And play regularly in a couple of bands covering a wide genre of musical styles, blues, soul, rock ect.

This amp attends more gigs than any of the others !. Go listen to one !

Did you find this review helpful?yesno
»
Read the 12 user reviews on the Marshall AVT275 »

Marshall AVT275 manuals and other files