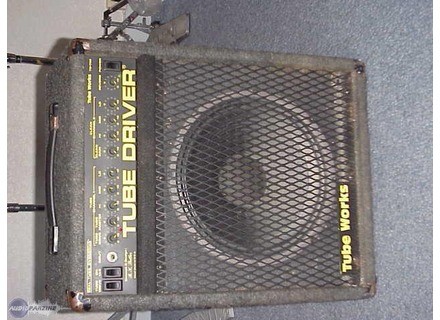 Tube Works TD-752 Tube Driver Amp
4
I bought this amp at Music Castle in Michigan (I think they are in Royal Oak) for about 250$. I bought it because I was looking for a better amp than my Gorilla Practice Amp that I borrowed from a friend. It was louder and cheaper than all of the other solid state amps but it was used, worn down and someone spilled beer on the back of it.

First off it has tubes!!! Its got 2 channels, Distortion and clean. They both have their High, Mid and Low and Master Volume Knobs. The Distortion channel also have a Drive Knob. Its got a very nice distortion sound, Sounds like a DOD FX69 Grunge Stomp Box (But the DOD doesn't sound grungy at all). Its very loud, I can wake up the neighbors quite easily at night. It has a foot switch to switch channels and reverb (You can also switch channels on the amp). Its also got an effects loop (Which I never use) Two Speaker outs and a line out. Its a good amp for playing small clubs though.

The clean channel is really a solid state channel and has no tubes what so ever but its still loud. The big problem with this amp is that it mixes the clean and distortion channels while you are on the distortion channels. It sounds pretty crappy for me while they are mixed (I play hardcore punk and crap like that) So when im giging I just turn the clean channels volume all the way down. I can't play something clean and then switch to the distortion channel, otherwise it won't sound distorted at all. Line out sounds pretty dry when I put it into my computer to record litte riffs and stuff and not nearly as loud as the amp. Reverb sounds pretty flat and not very noticable.

Very Sturdy, Very reliable except for the foot switch, I think its going to go bad in acouple years. I've dropped it acouple times and no harm has been done to it.

Nice amp if your not all about Metal or stuff like that. I think I got a pretty good deal on it too.

The sound is crystal clear

16
the channel distortion is blah but we can appreciate the clean channel mix and saturated
Bought used for my previous laché had me .. I have never left ...

crane's review (This content has been automatically translated from French)

Just an overall opinion.
I found this amp to bass player in a container, in working order except for the reverb and one or two knobs which cracked. A lil shot spray contact and two shots later soldering iron, this amp sounds! He uses it to his bass (active workman) for rehearsals and small concerts, and he really sounds worthy of a great amp, I am stuck!
The clean sound is round, does not saturate, and disto very nice. There's even a footswitch it and the ability to mix the distortion channel with the clean, very convenient to have a big attack with big sound.
It still lacks the big bass that 2x15 "could provide, however.
I wonder sometimes if I did buy a TriAxis ....