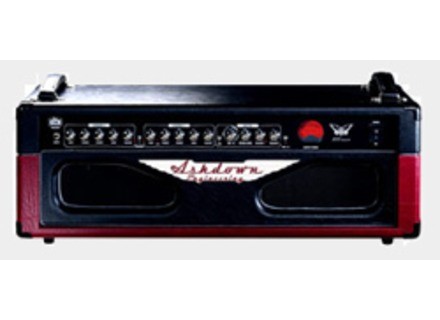 Dr_Raousse's review (This content has been automatically translated from French)

T very completely. I take off a point because it is not switchable low wattage.

Simple settings diabolical. It may well be a hybrid, designed like an old lamps. So intuitive. I mixed up some pedals but it is a matter of habit.

Channel 1 sounds very nice, nice crunch, besides affecting the middle attack. So he not play his starting role. We must leave it in its last quarter.
Channel 2 sounds very heavy, a bit clumsy but creamy. Here he does not imitate a very light so that. It is hard to achieve something incisive. But to accompany Bernie (Trust) or Freddy Mercury, it does it well. But suddenly, for a more british, I do not leave Channel 1 without disto ...

For 2 channels, adjusting bass is very tight. From zero to ten like we're from 3 to 7. Fortunately, the amp has a good base to start. But do not expect a very versatile head in that register low: it is what it is, punto basta.

Manual all in English but very clear. It is not too technical, it reads like a newspaper in his bubble bath with a whyskey. After we know enough to go test the beast.

The original sound is well balanced. It is a good hybrid of departure. I took away a point because despite everything, I was expecting an amp more "British", as it is, and that argumentation is that sales less cost, it sounds like a lamp. I could not test the Fallen Angel 60 All Tube to tell, but my Musicman hybrid (in reverse) and the Vox AC30 is really a different kind.

Then I remove another point with regard to the bass, then another for middle that affects the output. But I'm serious.

My favorite style is Jam, Pretenders, therefore, are chrystallins. So this amp is not the case.
But I also like The Who, Lenny Kravytz, then suddenly it's the fact perfectly. A great big warm sound.

I play with a St. Blues, with 2 double coils Seymour, I liken it to an SG. My other guitar is a Tele with home-made side Humbuncking head (I'll spare you the details)

Channel 1 can be a bit trite, but there still needs ... It is perhaps not very incisive. It's true, do not compare with the grail that is a Vox AC30, but still ... Channel 2 present, but not heavy enough for metal, not crunchy enough to mimic a true all-tube.

Nothing to throw into this amp. But her record is accurate and is not very versatile. I do not hate anything, just a little disappointed by its relative lack of versatility.

For 3 days I will head, without any pedal. Soon I will need a CBO and a Voodoo OD. We'll see if I catch the sounds clear and incisive.

What I like most is the number of settings and ease of use
What I like least is its size, it is the big thing! And it is not very extensive.
I have not tested any other before buying 230 pounds. Before the price I took the risk. In fact it is the all-tube 60W interested me but it was too expensive. And there was no notice, I am the first.

Value for money excellent. Apart from its small flaws, and his character not exactly what I want, it is very well finished and sturdy. Its large size is a pledge on this side.

I do not do it again this election, but simply because they're not quite my style. But I keep the beast, well worth it to me. With the risks I took, I should expect not to have exactly what I expected, but to be neutral, it is still a very good amp!
Did you find this review helpful?yesno
»