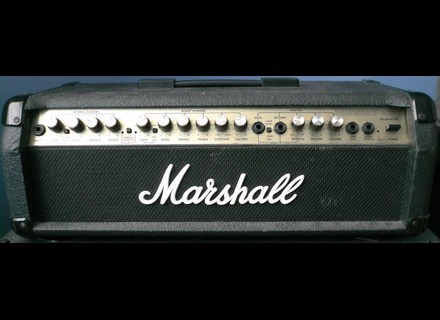 8100 ValveState 100V, Hybrid Guitar Amp Head from Marshall in the ValveState I series.

Marshall 8100 ValveState 100V
5
When solid-state amps started hitting the scene people were afraid of the new technology and most believed good tone wasnt there. Marshall believed they could make a hybrid amp that combined a pre-amp tube with a solid-state power section. This combination saves a lot of money in the production of the amp. This hybrid setup emulates the tone of a cranked power-tube section of a tube Marshall. It has a clean channel and an overdrive channel. The overdrive channel comes with two voicings and the clean channel has its own EQ. It puts out 100watts of power with an effects loop.

The amp has a very bell like clean tone and more gain than the traditional Marshall. The amp features a contour knob that when turned up emulates pushing the power section of the amp harder. This greatly effects the tone of the amp. The gain can go from traditional British overdrive to searing high gain. The built in spring reverb is a great feature but it can easily come loose so make sure your amp has it when you go to purchase it.

I mainly use LP style Mahogany guitars with high output humbuckers and this amp suited them perfectly. The high output pickups combined with the overdrive from the amp provided a great high gain sound. The 8100 is known for its clarity even with the gain cranked. The contour knob can change the voicing from having a tight low end to having a good high end bite.

With the 8100 I liked the ability to get classic Marshall tones along with the heavy tones. Nowadays 8100s can be had for very low prices. They are hidden gems that can be had for less than 200 dollars now. Big bands like Death, In Flames and Meshuggah have used them from time to time. This blows away all the newer solid-state amps and all of the newer low end Marshalls.

corpsegrinder's review (This content has been automatically translated from French)

J have not the good taste to all the sections but I resume: I play death metal, this is my first 8100 2corps.des I've connected the, I have pushed the saturation a background, I have taken for kerry king on SHOW NO MERCY! (for those unfamiliar: shame on you and your family!) I have never tried the clear sound, but the saturated bon.de maiden or acdc is the worst death while a passe.elle small grain degeulasse adore.je that I played on a 4 * 12 marshall cabinet, it sounds very bien.j 300euros.franchement have paid it all, I have tried the new series which replaces the Valvestate AVT and I prefer my big pepère.a you to make your avis.ca is the amp of choice for the poor.

math62's review (This content has been automatically translated from French)

Trs well for its clean, slightly distorted, and also a major trs well thanks to its powerful lamp

2 years of use and not a problem.
This head is already out there over 10 years and is one which works best
with an unbeatable price quality ratio

planetslide's review (This content has been automatically translated from French)

An EQ per channel, it leaves the freedom from clear and full.

Here is a manual?

Good amp for rock to metal.

It's not a JCM but the lamp of the preamp is doing its job. The two gain distortion is not thoroughly ridiculous for the metal.

The contour knob changes the sound deep, with a nice little range.

The light is not great, lacks a bit of heat, but by adding effects, so good.

The reverb is not his strong point in my opinion.

I carted this amp around for ten years and I never had to worry about. Reliability guaranteed!

The head is small and light (as transistor) so easy to carry, which is good practice to repeat.

By turning the reverb (or by putting the other), and cutting (or replacing) the front plate, you can drag a rack in the receiver, which allows to get a head "while a" hyper convenient to carry. It's really good ...

There is no miracle, the sound is not that of an all-tube amp, but it's really a good product anyway. Connected to a good Bafle (eg bowls V30), it sounds even surprise really not bad.