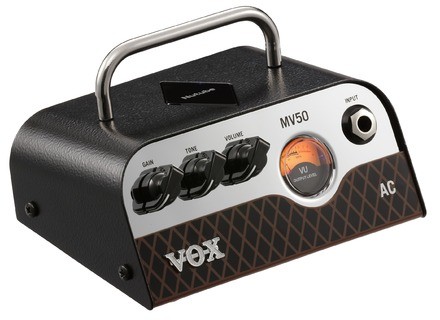 Vox MV50 AC
5
For which specific applications or uses have you chosen this product?

Installed on my pedalboard, I use it only on headphone so far as I recently moved to a flat but I consider buying a good cab soon to play at home at low to moderate volume.

How long have you been using it ? :

I’ve use dit daily for 3 months with an American Standard Limited Edition Telecaster with a bridge humbucker.

Have you tested other comparable or competing products before purchasing this one? :

I tried supposedly good small last generation digital amps with all known features (modulation fx, headphone out…) and it sounded digital and cold, a no-go for me as I previously played on a tube Marshall DSL 40C which was way too powerful to play at home, so to get a good valve amp I turned to this small Vox head which keeps its promises.

I also tried the Two Note preamp range which I found attractive but they provided me with strange noises which I couldn’t determine whether it came from the device or the supply, considering I only tested it in a shot using my own pedalboard. In comparaison, the VOX head was really silent with a nuanced and sharper sound, so in a word convincing.

As for my pedalboard, I use : a Moller TREX tube screamer, an MXR Fet driver fuzzy distortion, a TREX comp, a TREX wah, a TREX ghost tone reverb, an MXR carbon copy delay and a BOSS EQ.

I generally put the VOX’s gain at 0 (clean), its tone at 12h and volume at 10h, which is way enough to mye ars while playing on my headphone. The pedals sound really good on the amp’s clean, and sometimes I only use the amp’s crunch with a little comp for the typical Vox sound I love. In clean, a bit of compression and reverb are required to have yous playing style’s subtleties come out (comething all amps require to my taste).

I use my pedals on clean sound to change the grain and get into more modern territories, and also getting close to Marshallesque sounds. In the end, I get a wide sound palette with a single-channel amp, with a tube sound in my headphone (harmonics, warmth, dynamic…). I originally intended to buy the VOX MV50 Clean, but it wasn’t available before a while so I got for this AC which was in the shop’s window and tried it for a long moment. I not only have no regret but am also particularly satisfied – hence this review.

I read people criticizing this VOX head xlaiming the Hotones were half the price with an extra fx loop, well I’ve owned both and I precisely sold my Hotone British Invasion which I used to work at night as it was way too limited with my setup – as soon as distortions came in let alone the wah, it definitely lacked clarity. While the Vox has no fx loop indeed, I put all my pedals in the front and it works perfectly.

+ Sound quality with a pedalboard (can’t wait to try it with a good cab!)
+ Value for money
+ The knobs’ progressivity and precision
+ its look !

I can’t think of any so far, as it perfectly matched my expectations but I may update this review after using it more – and especially with a cab.

Now that I think of it, perhaps it lacks an internal reverb for those who want to use it with no effect pedal.

Listen to the 8 audio files about Vox MV50 AC »