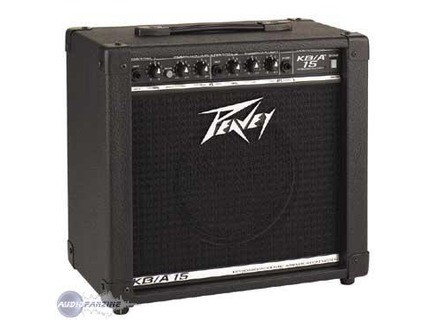 Peavey KB/A 15
4
Transistor amplifier with 15 watts RMS with two entries in jack, the first accepting a guitar (with a button "bright" I have not tested). For each channel, it has rained on the volume control setting bass and treble. Finally, the KB/A15 is equipped with a headphone output.

I would have appreciated as an auxiliary input on my little Behringer KT108 to play on a post-playback iPod without sacrificing one of two entries, but this is not dramatic because I have a tiny console dedicated ten votes such use. The

KB/A15, given its small size, is not very generous in low, but I was surprised by his power. Tested as part of a jam session with my AX-Synth in a fusion / rock, I had no problem to pass over the drums and guitar solos. The lack of bass is so not a concern, however, because it helps not to make the slurry by mixing too much with the bass. on the other hand, if I had to play the bass synth, I obviously would prefer to go out with my KB/A100 ... but for all other uses, it is a joy to get out as much power an amp so light.

In terms of audio fidelity, it's okay, do not expect to find all sounds alike, this type of amplifier is not designed to be highly accurate, and reduction in Mono still bothers me a bit. I would test the Roland Mobile Cube, but with only 5 watts in my opinion it would be too fair to be exploitable in cafe concert.

This amp was given just a week ago by a friend who had no more use, so the price / quality ratio is unbeatable for me! Compared to the Behringer KT-108 that I use (AIS) in rehearsal gospel for two years, the Peavey is a little heavier and less well off in connectivity, but it is much more powerful and better restores my piano sounds. To accompany a choir unamplified in churches or for tiny rock scenes, I think it's enough, so I will let my huge KB/A100 home!