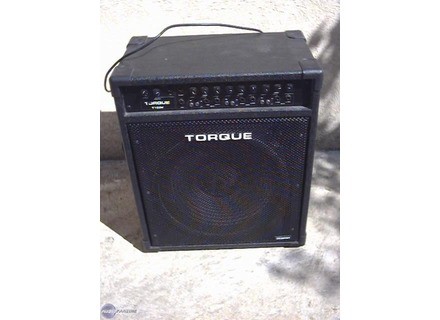 Torque T100 K
4
This is a keyboard amp that can double as a bass amp or guitar amp in certain situations. It has three channels, one for keys, one for acoustic guitar, and one for a microphone. I'm pretty sure that the keyboard channel can be used for bass as well. These can all be run at the same time at high volumes. There are 1/4" inputs for all of these channels, except for the mic channel which only has an XLR input (which makes sense). There are a ton of features, a built-in compressor, a 4-band EQ, master volume, reverb. There is also an "insert" input which I've never used. There's also an effects loop that I have yet to really use either. The amp has 86 watts of power, though it feels like a ton more.

The good sounds that come out of this amp are very particular. Keyboards sound good right out of the bat, as do acoustic guitars (although to a lesser extent). If you are using a PA, then the microphone jack is almost irrelevant. The mic/keyboard combo would only be good in a rehearsal situation for a pianist/songwriter. I don't really think basses sound amazing out of this amp, but it works, at least. I've seen people try to use electric guitars, and I think that they are ultimately really weak-sounding and too clean. The manual for this amp explains everything in a lot of detail.

This amp is really good for keys and acoustics. Since this is what I got it for, I am very satisfied with it. It doesn't color the tone that comes out of my keyboard, but it doesn't have the anemic, lifeless feel that comes with running keys through the DI into the PA. In other words, it brings the keyboard to life. The built-in compression goes a long way towards smoothing out the sound. These same qualities make it great for acoustic players who don't want to color their tone too much. As I said before, don't expect much out of it for electric guitars and basses, these instruments just aren't really compatible with this amp. It's not too expensive either, so I highly recommend it to keyboard players looking for a reasonably price keyboard amp that will do the trick for them.

very easy to use, one branch and spit ca
... Never tried it ... but keyboard + bass guitar + vocals yes
It was my first sound of my first group ... and this thing must be said that c is as solid as that of a tank assault!
proof it works yet, today it is back for a vdrum and it does the job.

c is a product not grow on trees but for the strength of the craft, yes I would do it without hesitating one second choice