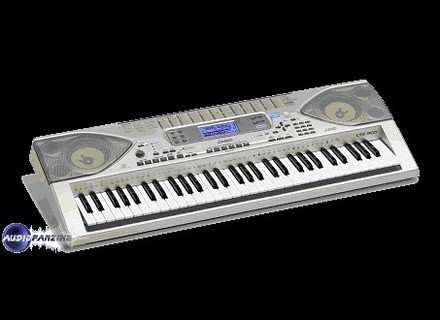 grougrou's review (This content has been automatically translated from French)

Casio CTK-900
5
- Small entry-level arranger
- 5 octaves, basic keys
- Only one headphone, MIDI in / out, sustain pedal jack
- About 600 sounds (several banks of sounds downloaded from the Casio site, which sounds with waves, you can also download the keyboard its own waves)
- You can edit summary sounds like a synth, it remains minimalist but quite funny for this type of gear, so Attak, release, resonance ...
- An organ with zippers ... yes!
- Superposition of two sounds (polyphony attention to ...) + split keyboard
- 160 styles (+ styles downloaded from casio.fr ...) you can edit, change instruments, volumes of instruments + octave + pan ... etc
- Effect: reverb (several types ...)+ chorus ... dsp + a multi-purpose classic (phaser, delay, distortion, combined ...) more or less an editable + eq rather simplistic
- Basic sequencer (backup through pc comes with little software)

So for the price (around € 200 new) is complete, saw nothing wrong investment, unbeatable compared to the yamaha competitor (in this price range only)

- Keyboard used for about a month while traveling (cheap, small, light ...)
- The +: piano sounds not bad at all, I expected a big poo, but it is rather successful, honestly for € 200 ... after you must draw in the banks but it comes out easily, beautiful tablecloths and nice effects correct ... drum kits are decent but do not both in the patterns of arrangement that playing the keyboard ... arrangements themselves are quite BOFs ... but as you can edit them there so we can head out of water ...

- The -: not good quality keyboard, I have enough fear to degrade rapidly, but there also may be surprised casio t he ...
- To quibble amplification ... but at this price as it is finally more than respectable

excellent value for money eventually, Casio offers a nice machine, well done with a sound quality very honorable for this price range + functions normally assigned to the higher range such as editing sounds and arrangements on the wrong gadget + sampler ( but it's funny), so for the price it is an excellent alternative for smaller budgets while facing the computer in the end much more wasteful in comparison, of course it has nothing to do with a ghost or other reason, but it ' is just six times cheaper ...