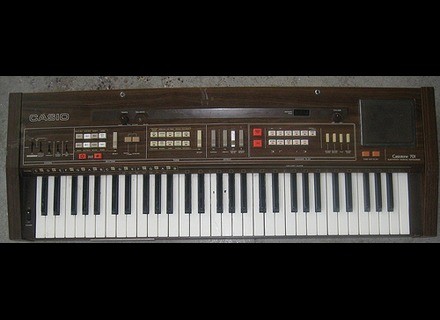 Casiotone 701, Keyboard Arranger from Casio in the Casiotone series.

Casio Casiotone 701
4
This Casiotone has a fairly standard box rhythms at the time, which may in addition fills out not easy to pigeonhole (& not very nice!).
Two possible types of bass and can play a consistent rhythm accompaniment (waltz, rock, rumba, etc.:. 16 in total).
Easychord function can easily play a major, minor & 7th ..
Two buttons "special effects", the sounds of laser gadgets.

The organ has 20 sounds, many organs. Polyphonic, of course.

Ability to program pieces, but it seems puzzle & really suited to lunchtime! (Including this synth is obviously not equipped)

Finally, the 701 could be accompanied by a release of pen scanner, which allowed reading scores in the form of barcode. It is found.

Organs are well frankly, the level of what could be found in such Farfisa organ / Jen / etc. in the 70s. Thick, organic hot.
The others are for the most part (especially the piano) to avoid - it's all hollow.
Two or three others fared respectably, like the vibes.
Wind instruments are not recognized & pus or less successful.

Synthetic organ a little heavy but still portable, nice design late 70s/early 80s, which remains relatively versatile for a Casio.
This can be a nice alternative for a live setup, or let hang in a studio repeats.
Suitable for rock, pop, reggae ... While requiring a little vintage style sounds.

I sold easily € 60 - in my opinion, do not put more than 100 € for this corny. If the organ sounds are really good, they are less customizable than on Farfisa, Eko Tiger, Jen, etc.., Which may have more to mix signals, systems zipper.
However, the interest in relation to these organs is that the 701 has other sounds, but these are less bluffing! Nevertheless they can troubleshoot: D.

An illuminated has 7 tracks (excellent bill!) Entirely on a 701: it sounds downright!
https://lukedsico.bandcamp.com/album/videophone

I almost regret having sold, but I have several synths & Organ, we had to make room, and I never used it!