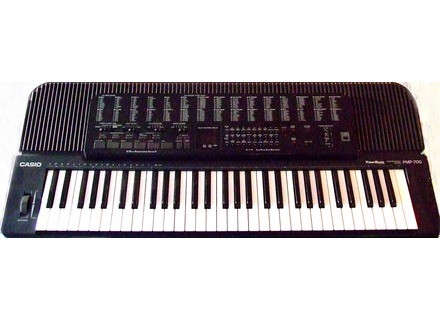 troust's review (This content has been automatically translated from French)" Twin brother of CASIO CT-680, all black!"

Casio PMP-700
4
I have not seen a description of audiofanzine for CT-680, then here are some key features of the PMP-700
Keyboard 61 keys standard no velocity or aftertouch even less weighted.
Black plastic shell, hollow envhissante but from all sides, which makes it lightweight keyboard. The only visible difference between the CT-680, the control panel is completely black, which gives it an aspect less "toy" on the CT-680 is blue.

Back:
-The left and right audio outputs and headphones jack 6.35
Two-pedal inputs: sustain and volume, 6.35
-3 MIDI in - thru - out
-A tone adjustment knob is very well to put the keyboard in "tune"
A DC-power input-9Volt, adapter not included when purchased. It also runs on batteries but as it is very greedy ... to avoid.

This is not a synth, like most electronic keyboards are commonly called, but an entry-level rhythmic sound palette and sequencer arranger.

I did not have the manual with this keyboard but I bought the doc CT-680.
The sound is average range for sounds 80 -90. PCM sounds.
220 sounds, but I remember most organs, some low and some exotic sounds. One interesting thing, there is a part of casing setting and tone like "Detuner oscillator compared to another" Warning this function only affects the use of the keyboard live not in midi mode.
A rhythmic pallet with 110 long styles.Intro, Intro, Fill-in, End Break and Coda.
tempo, start stop start of séqueceur (I do not know how many notes it is capable of recording).
A song demo Genre techno-dance, early 90s.


Totally Midi in, out and thru, and yes, it recognizes the majority of parameters.
In general the entry-level keyboards we happy IN and OUT and as said Fernand Raynaud "is no TRU? "But there is thru the present

Released in 1991, I acquired in 2000 en at that time.
Model similar to the CT-680, I always wondered what the PMP-700 brought over, both have the same characteristics.

I currently still used for some additional sounds in my compositions.
I also use it online bass playing on "detune" oscillator to give more depth to the sound. And organs, especially the classics, are interesting. To avoid acoustic and electric pianos have been done much better since. Even for CASIO.
His rhythm section and sequencer does not offer any benefit to me, because this device is used in the middle of a keyboard set in my home studio.

This keyboard is a perfect companion on vacation, he went camping and caravanning for many years.
I keep it, no need to sell, it is still in service.
I can not say if I would do this choice, why not, if it breaks down I would look for perhaps a similar, in fact I have other CASIO latest.
Did you find this review helpful?yesno
»