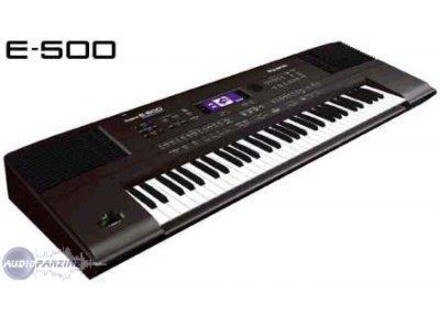 configue super simple no need dutout manual, I myself am a guitarist and as soon as I got my hands on it, it was super intuitive.

3 years already and it's only happiness, I used to play mostly vintage rock, my keyboardist uses it for its super realistic piano (one of the first arrangers owned a piano simulator)

what I love most his pianos and organs

quality very good price compared to the price I u, yes I would choose again.

heybulldog's review (This content has been automatically translated from French)

This arranger keyboard is an excellent compromise performance and ease of use, we can play well and quickly without taking the head with submenus.

I have used it from 1998 to 2000, with my group 80's and has traveled to concerts repeats neighborhood at the time (he was our drummer + keyboard live, I developed the smf batteries on my G800 and was read by the E500 due to disk)

With its memories and its ease of use, it was really practical to store the scene recallable sounds in 2 buttons. (Modern keyboards are less practical, too complex ... sniff)

Now it is in my living room as 2nd keyboard to strum while singing into the microphone, plug and play is what you need in a living room, the sounds are good enough for this purpose even today.
Its more: a balanced and powerful amplification, just right to play and sing alone ...

Obviously it's not worth a north electro 3 (I in repeats) or a keyboard later, but considering its age it is really convenient. I give 250 € in making a case. Need not pay € 400 instead ...

But mine, I keep it. (Sounds better than a Yamaha or Casio G800 or the same time ...)
Level arranger is also very good for the time (released in 1997 on about??), There is not a lot of different styles but this is enough for many.
Level sequencer and others, it is not the top is basic, it is not a worstation or arrageur upscale current course.

bmwk100's review (This content has been automatically translated from French)

Roland E-500
4
The keyboard keybord E500 has exactly the same processor as the E300, so it sounds the same, however, the E500 is easy to use (for scne) because the manual cursors can (while playing) to change the parameter.
of surcrot (compared to e 300) with everything RULES entering the menu and therefore can not change whatever it is playing!
The e500 has a + between indpendante for a microphone with echo and always incorporated by rgl potentiomtre manual easy Accs. (it can also play oriental music) and they dfile do karaoke with the text on the screen
the e300 e500 as trs keyboards are valid, but now didemment DtrN the VA7 and K70 which is a must, the VA7 is very easy to use and the sound scne Ingala (but 3000 euros prize nine) with after touch, sensitive keyboard, ect ... Variphase

Very easy for the E500 because everything is visible potentiomtres mcaniques (sliders)
more difficult for the E300 because it is necessary to enter the menu.

but easy one as the other

I use it (random image and in combination with a Roland VA7 and a Hammond XB2 5 years.
it has the particularity to play the mandolin Italian and has two upper overlays and all the effects in the menu.
the accordion is very good and the organ thatre.
when I bought was a must, but the technology that is quickly Exceeds each keyboard.