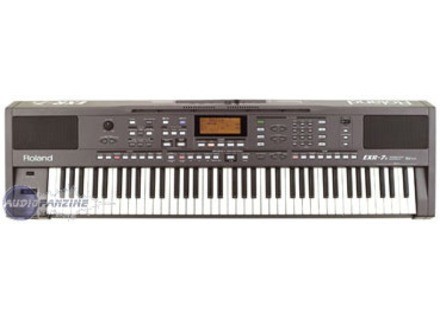 EXR-7s, Keyboard Arranger from Roland in the EXR series.

zerweb's review (This content has been automatically translated from French)

Roland EXR-7s
5
76-key arranger
6 octaves
split, dual hand.
4 MB flash memory, noon USB
64-voice polyphony.
5 functions cover: acoustic, pop, rock, dance, ethnic.
it's fabulous, the change is even playing instantanment
sounds there are about 540 all very good, there are over 21 instruments
ralistes.100 more about styles, you just import it via USB with a computer.
the sensitivity of the keys is adjustable.
and 2HD floppy disquette.2DD
connectors:
2 headphone jacks in front.
Taken to two amps
1 USB port
Making an assignable Sustain
Connecting a 12 volt transformer

Configuration is very simple
It takes a while to get used to the button functions as the same button several
fonctons according conbinaisons with others, or longer support.
edition of the sounds is easy enough for a good amateur.
the manual is clear, small annoyance, the three languages ​​are on the same page, or reading
a little studious.

I use it for 6 months
I like the sounds of piano (roland!)
the sax, flutes, accordions, organs are ralistes
I had before yamaha, psr 530, 550.il lacked an octave
keys made noise playing, with the Roland is a rgal 7s.
we just play like a real piano, and an arranger in addition to rival
those of its class.
the quality RAPORT price excellent.900 euros all inclusive.
I would do the same choix.avec the same amount of money, because with a larger amount of money there are better, but it's expensive, for example, tyros (missing the 76 keys even when)