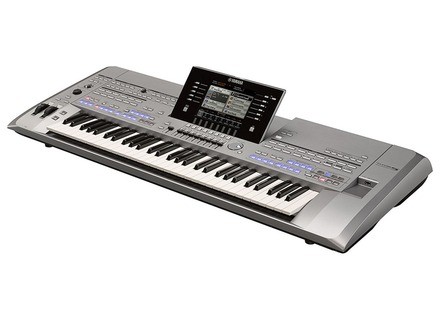 Tyros5-61, Keyboard Arranger from Yamaha in the Tyros series.

Lougarou's review (This content has been automatically translated from French)" Many tried, but not purchased !!!!"

Yamaha Tyros5-61
2
I let the user viewed the Yamaha site, Utube videos and other media for the characteristics ...

The two negatives, I'll come back later, are, in my opinion, the sequencer and directory listings, but correct me if I'm wrong because I have tried several times in the store before writing this review and I said that I am a former owner and experienced user of the Tyros 4 !!!

In continuation of the Tyros series, ergonomics remains true to the brand, those who know do not complain, those of another brand may be baffled but it usually take about a week before the first landmarks: navigation modes (song creator, style creator, this register wav etc ....).
The manual is clear for what it exposes functionality otherwise, you're on !! However, if you've ever used a Tyros, it is ...
Editing sounds is limited but still convenanble and sufficient, it is not the destination. Korg for example, to take an arranger of the same price offers a more complete summary ... But it is a matter of choice but it is not disturbing at all.

Tried store and NOT bought for 2 main reasons:

- The sequencer has not changed: it is simple and MIDI implementation of the sequencer is done poorly. To drive via an external sequencer (PC for example ...) it's a hassle and YAMAHA has not changed since the Tyros 1 !! With the T4, I managed to use it anyway via my PC but still laborious. I would have preferred for that price, it implements a sequencer to work independently !! Of course, it can be used as it is, but its use is skimpy for a machine of this price, even a sequencer or MOX6 MoXF6 (or higher of course ...) is faster. Editing sequences on the T4 is a !!! horror. Korg is better !!

- The getion directory listings: I will not go !! Korg again done better: fonstion with their song book, you can make lists of MIDI AND AUDIO songs (mp3 ...). The T4 and T5 do not allow that !!! I who made the scene, it's a function of what I expected and YAMAHA: NO !!

8 of 14 people found this review helpful

Configuration very simple and use available during the game. Editing sounds and effects relatively easy although it should go into many pages (pity there is no touch screen), user manual limited (basic) and reference manual (more complete) only available in PDF on the web (we would have liked a manual paper reference). Pretty good.

Well, it's been five months of use. After having had a Roland G70, the difference in sound is obvious. Very good sound quality and styles are very good writings, especially in terms of jazz and variety, although very Anglo-Saxon (in my opinion less relevant in terms of europeene culture). For cons, the edition styles is curious. In fact, except for the drum part, we have not access to the other instrumental parts to remove notes, for example, making it necessary to go through an external app. Not practical. From this side, the Roland G70, although former is still very early. The breaks are one measure, although annoying to build, for example, longer transitions. In fact, the Yamaha philosophy is still curious. The lack of touchscreen is felt, especially for call parameters, which is a shame for a camera of this price.
on the other hand, recording audio and possibility to integrate the Multi Pads audio or midi is geniale (parts of choirs pres recorded some songs, rhythmic phrases adding parties to the arrangements or effects, for example). As for the DSP effects and super joints, is formidable because it actually adds to the game of truth (the amp simulations for guitars are truly amazing). In my opinion, a bit expensive anyway and especially should gain simplicity in terms of publishing in general. And a small synthetic floor would have been welcome. Little regret for the feel of the keyboard is far behind the semi-weighted of the G70, a reference in the field.
A very good instrument that I do not regret having bought especially for the sounds and arrangements, both on stage that computer music. And keyboard 76 keys was anyway very attendu.Sans problem, I do it again this choice.

ironman92's review (This content has been automatically translated from French)" arranger Inconvenient!"

Yamaha Tyros5-61
see the features on the site

the setup is a little difficult but we made it, the manual is very clear for the implementation
practice tyros 5.
Editing sounds is really intuitive with a little training.

I use it for a week and every night I put it back from work for
tame as possible, especially for improvisations in spide and the LCD screen is super nice tyros,
the fatherly and underground sound pretty good ... after that is a matter of taste.
I am XF6 pattern which is also dedicated to the musical performance (when you know a killer is in
used), but side arrangement but I appreciate much more the tyros this side.
In 3650 more balls I fell pregnant and I must say that my surprise was size
compared to what I expected, not unhappy at all, as happy as a cat in the sun!
I've tested differing arranger keyboard but my choice is clear:
The five tyros is winer!
If I made this choice is to be the most efficient in my compositions and productions, and would do it again.

Published on 11/12/13
Following the 20+ videos posted yesterday, Yamaha now announces the detail of the new version of its Tyros arranger keyboard.

Yamaha Tyros5-61 manuals and other files