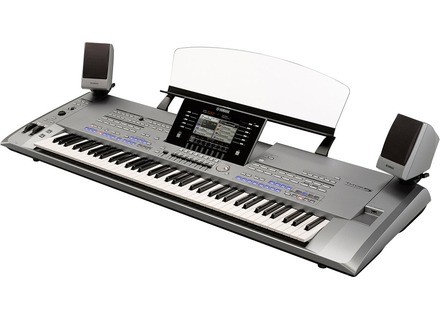 Tyros5-76, Keyboard Arranger from Yamaha in the Tyros series.

THE BASIC CONFIGURATION IS EXCELLENT
I HAD THE TYROS 1 AND THEN THE 2.
FANTASTIC INSTRUMENT, AMAZING FOR A PIANO BAR
WHETHER YOU USE IT AS IS OR YOU WANT TO TAKE IT FURTHER AND TAKE THE MOST OUT OF IT, THE POSSIBILITIES ARE VERY WIDE!
TAKING IT FURTHER REQUIRES SOME TIME AND ORCHESTRATING A SONG CAN TAKE A BIT OF TIME... BUT THE RESULTS ARE JAWDROPPING!
PERSONALLY, I CURRENTLY USE IT AS A TYROS 2 AND WILL START TO WORK ON ORCHESTRATIONS PROGRESSIVELY TO TAKE IT FURTHER... AS FAR AS POSSIBLE...

I LOVE MY TYROS!!!!
Did you find this review helpful?yesno
»

Yamaha Tyros5-76
5
After having worked 8 years with a Roland G70 (which is excellent), I fell for the T5. Finally 76 keys, something we had been waiting for a long time. Pianists are grateful. In terms of sounds, it sounds silky overall and the super articulations are a significant plus, as long as you use them wisely, which demands some training.
In terms of effects, there's not much to say, the DSPs are formidable and cover all your needs. Perfect connection both over Midi (it has 2) and USB (it has 3), although there's a small and bizarre thing: To access the HD directly, without a computer, you need to turn it off and turn it on again pressing Song List. It would've been better to include a dedicated function in the menu.
Sounds are barely editable, there's no synthesis section, but hey, it's an arranger not a synth.
It was a good idea to separate MIDI and audio, because it allows you to use both at the same time if you want to, or to go from one to the other without problems. In terms of audio, it supports all common formats, the choice is up to you.

Very good and fast usability. It's easy to do anything without breaking your head,
On the other hand, the printed manual is disappointing and you are forced to download the Reference Manual in PDF to go any further. Not very smart of Yamaha, especially for a product with such a price tag.
Fast but limited sound and effects editing.

I've had it for a month but I had already studied it thanks to the different forums and demos. Overall, it's very easy to use.
After some experiences with arranger keyboards, especially Roland's G70, I was never confused, so there's not much to add.
What I do regret, is everything that has to do with the sequencer (the visualization on the screen), which isn't even close to the one on the G70 that resembles a DAW, as well as the lack of clarity for editing (you have to browse a lot of pages). But most of all, something that is a real pity for a product at this price point, is the lack of a touchscreen! And the pretext used by the brand (the price), just doesn't hold up. But you'll get used to it!!!
The price is justified, given the technology and performance of the T5, although I would've expected a more solid shell and not this fragile-looking plastic one ─ Flight Case mandatory. Another small drawback is that the keyboard is a bit light, for my taste, especially coming from the semi-weighted keyboard on the G70, which was wonderful.
However, I don't regret my investment at all because it is exactly what I was looking for in terms of sounds and usability, as well as modern and well-written arrangements. Even if traditional sounds (accordion, folklore among others) are not up to par, guitars, brasses, wind instruments and strings are really cool. And the Ensemble section is a real treasure, because instruments really sit in their place.
In short, a good tool for people who do piano bars or who record demos directly or with a DAW. And, besides, Yamaha cares about its products and often offers updates that always add something more. In terms of reliability, if it stems from the same line as previous instruments (DX Series and more recent ones), I think you don't have anything to worry about.
I strongly recommend it, even if it seems expensive. After all, quality and reliability have a price.
Did you find this review helpful?yesno
»

For the rest, the details are on the manufacturer's website.

Almost irreproachable sound quality, it's a real treat. The electric pianos are superior (especially in relation to the T2, which I used to have), the flamenco guitar is a delight for the ears and the new DSP effects are quite good.

I love the organ world and ensemble sections (especially the violin quartet). Styles can be finally controlled with the right hand, and they have several modes, nice.

The audio styles are warm but be careful, they can't be edited (that will surely be a new feature of T6).
The MP3 audio sequencer isn't revolutionary, considering the competition.

Some drawbacks:
- Its plastic side (at this price, anyway), which nevertheless make it more resistant to moisture (in my opinion). It is also lighter, which is a good point.
- The vocal harmonizer, which is awful, frankly!!!

I've used it for 15 days and I already know it pretty well. I'm impatient and can't stop sliding my fingers across it. I am thrilled with it and even if it is quite expensive, I would buy it again 10 times, because for me this piano is a standard!!!
Did you find this review helpful?yesno
»

Yamaha Tyros5-76
5
I don't want to go over all the possibilities of this remarkable instrument, for that you should go to the Tyros 5 forum.
The 76-note Tyros 5 is the culmination of the 4 precedent ones.
There's not much to criticize, so the debate revolves around the philosophy of this type of instrument.
There are the pro-arranger and the anti-arranger voices, who (rightly) criticize the commercial policy
of Yamaha, but that's straying from the main subject, it's a debate between spoiled kids who already have Tyros 1,2,3,4,and even the Korg pax3.
But if you have to buy one digital instrument, the Tyros 5 76 is a must. With its 76 keys you can play like a pianist and it's you who decides whether you want an arrangement or not, to split the keyboard or not, your right hand is free and complex chords are recognized by the styles. The tyros is an arranger keyboard if you want it to be, its sounds are fabulous and alone for that you'll crave for it. It would be tedious to describe all additional functions, but the tyros is not unnecessarily complicated, it's easy to use.

Sound editing is rather limited, even with the software, you can change ADSR, the filter, but simple "elements" always have the same character (strings use the same elements
for 20 sounds).

The tyros finally has 76 keys, the keyboard is pretty nice.
I don't like the vocal harmony at all.
Did you find this review helpful?yesno
»

Published on 11/12/13
Following the 20+ videos posted yesterday, Yamaha now announces the detail of the new version of its Tyros arranger keyboard.

Yamaha Tyros5-76 manuals and other files