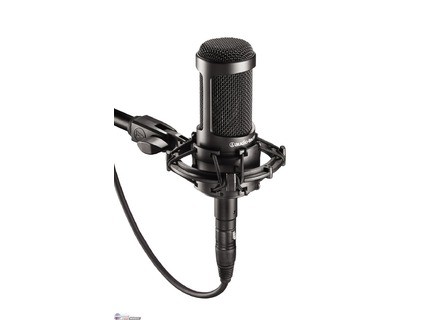 Audio-Technica AT2035
4
The AT2035 is a large condenser microphone with low noise. The qualities of the recordings you will get with this microphone are very natural and give you a “true” sound. It is a great microphone for vocals, guitar tracks and even drums (mainly a kick drum). This microphone is very versatile and sounds great in live and in studio recordings.

You can use this microphone in wide open spaces and not have to worry about external noise being picked up from other sound sources. This microphone is a great choice for someone who records at home and records from a few different instruments. The AT2035 has the perfect frequency range giving a thick and warm sound no matter what vocal tone your voice is. It does have a low frequency roll off switch with a standard 3 pin XLR connection.
After recording with this microphone you will not need to boost many frequencies, just maybe a little on the high end if you have a deeper voice. I have been using this microphone for over a year and I fell in love with it after just the first few uses. I was in search of a microphone that was not only affordable but that could record many different instruments and vocal types and also a microphone that I could use live for a few different sets. This microphone does not get much use live from me anymore, but I still use it at home to record sometimes. This microphone is affordable and works great, I have also used many of the other Audio Technica AT microphones and many of them are the same. Even the ones that cost more than the AT2035 like the AT2050; I do not feel like that microphone is better than the AT2035 and the AT2035 is cheaper and gives you a better quality recording.

Audio-Technica AT2035
5
This is a budget cardioid condenser mic, which basically is a nice way of saying it is cheap. However, it has some really nice features that you don't see on a lot of cheap condensers. It has a -10db pad and a high pass filter that are both activated by physical switches on the mic. I'd say this mic is best suited for the studio. It is really well built and seems quite tough, but like all condensers it is prone to feedback and picking up unwanted sounds. Those two aspects of the mic make it less than ideal for live use.

Another great thing is that it comes with a shock mount.

I really like this mic. It has great clarity. I've used it for recording acoustic guitar, bass amps, guitar amps, and vocals.

For acoustic it really captured the warmth and body of the guitar. It sounded great on its own, but I also tried blending it with an SM57 (placed at the 12th fret) and it sounded phenomenal. The SM57 really brought in some of the high end sparkle.

The -10db pad really comes in handy when recording loud guitars. Sounded great alone, and again, I also really liked it paired with an SM57. And the built in high pass filter makes it so you don't really need to eq your guitar tracks. Its really handy.

It also does great for vocals. I've used it extensively for recording my voice. Seems to stay very true to your actual vocal tone. Its also very sensitive.

I am a layman when it comes to studio, so I can't tell you which high end mics the AT2035 competes with. What I can tell you is that this is a clear, great sounding condenser that makes a great addition to any home studio.

Anonymous 's review""Suffers" from the "strangeness" of the 20-series"

Audio-Technica AT2035
4
That being said: The AT2035 is a cardioid condenser microphone that targets the entry market, although the microphone, as part of the AT20-series, does possess the unique characteristic of feeling non-hyped, but slightly squished. This means that it doesn't have the natural "air" of the other low-entry condenser microphones, but it lacks the sibilance peaks and the harshness of the high frequencies of them as well.

The AT2035 has a high-pass switch and a pad for high SPL's. Useful to have, but personally, I did not employ either of them regularly during my time with the 2035. That peace of mind, however, does make me feel more confident in singing into one than into a 2020. That, and the shockmount that comes with the microphone makes this microphone much more intimidating.

This isn't exactly specific to the AT2020 and the AT2035, but I experience a certain level of anxiety singing into a condenser not in a shockmount. Not because I'm afraid of vibrations, but because the shockmount, like a pop filter, seems to tell a singer where he or she should be.

I'm grateful that the way in which the 20-series is cheap is its avoidance of that "fullness" altogether; I appreciate Audio-Technica for not trying badly to recreate that detail.

If you were constrained to these entry-level microphones, I would strongly recommend any of the AT20-series microphones. They are leaps and bounds above all of their peers.

Although. If deciding between the 2020 and 2035, go for the 2035; it's slightly less noisy, and it's more sensitive and a little more flattering.

Audio-Technica AT2035
3
pretty good cardioid microphone for miking voices, features an&nbsp;interesting&nbsp;10 dB pad and high pass filter at 80 hz, well adapted to control voice recording, this a a first pleasant&nbsp;purchase, for anyone

Satisfied by my purchase .... suprising quality/price ratio
Did you find this review helpful?yesno
»
Read the 9 user reviews on the Audio-Technica AT2035 »