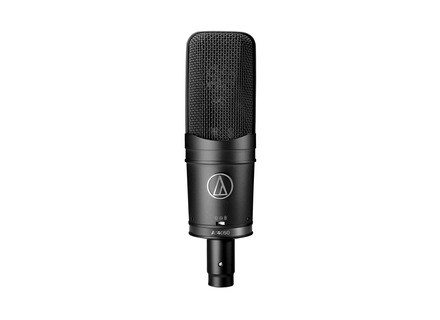 View all offers for Audio-Technica AT4050 »

Audio-Technica AT4050
5
The AT4050 is a large diaphragm condenser that gives you the ability to change your polar patterns on the fly. So no matter where we were recording at we could easily adjust the polar patterns to give us the best possible quality. I have uses just about every single Audio Technica microphone that has come out over the last 10 years and this one was one of the more impressive ones to me. I was very worried at first when I saw the price tag because I thought they were just jacking up the prices but still keeping the same quality microphones.

You can use this microphone for instruments but I think it should stay on vocals. If you want to get the best out of it, you will need to use it on vocals. It will sound great with male and female vocals of all vocal ranges. To me this is one of the best reasonably price vocal microphones that is on the market. We have recorded with this microphone over 40 times and several different artist and bands. We have not received a complaint yet. I actually wanted to see how this microphone would sound live but I just haven’t had the time to do it yet.
You can switch from figure 8, cardioid, or omnidirectional polar patterns right on the microphone. It comes with a shock mount and it is very durable, I do not think there is any need to worry about dropping it because it is made out of durable metals and the grill is very solid too.
The highs are clean and very transparent, the lows are rich and full just like I like them. I have been using this microphone personally since 2009 and in about 2011 I started recording other musicians with it. It has sounded great with all vocals. I am still kind of anxious to try it live and really try it out on some instruments.

Audio-Technica AT4050
4
This is one of AKG's best large condenser mics. The price definitely reflects that also. You usually only find these in higher end studios but they pop up sometimes when big bands are on tour. In general the application is meant for studio vocals but in my opinion it can do a lot more.

I feel like the easiest way to review this mic is to go through all its applications one by one.

Vocals - Obviously this is where the 4050 really shines. It's a very warm mic and when coupled with a solid preamp it can make pretty much anyone sound good. I would agree with this. I've had one in my studio for a couple of years now. For tenor male vocals it is probably one of my favorite mics. There are other more expensive mics that will sometimes beat it out for different singers, but this one at least gives them a run for their money. Honestly there is not much difference between this mic and the $3000 ones. Especially if you don't have a really good preamp. For the money it's a solid vocal mic for any studio.

Acoustic gtr - Okay, to be fair I usually pair it with some kind of pencil condenser, but I have tried it by itself and it's pretty amazing. If you use a lot of Jumbo guitars it might not work too well because of how warm the mic is. I have a Taylor GS with a lot of bass and this mic makes it sound much to boomy. For smaller acoustics it's one of my favorite mics though.

Guitar cabs - I don't use it like people might imagine. I will close mic the cab with some kind of dynamic and then stick this one a few feet back for ambient stuff. The warmth really gives my tracks the extra fullness they need.

I have never used this thing live. It gets used in my studio probably once a week at least. Usually for vocals and certain acoustic guitars. It works well as a room mic too.

Anonymous 's review"Jack of all trades, this one."

Audio-Technica AT4050
5
The Audio-Technica AT4050 is one of Audio-Technica's high end studio condenser microphones, with the three standard multiple pickup patterns one would expect to find on a microphone with multiple pickup patterns: cardioid, figure 8, and omnidirectional. It has a frequency response of 20-18,000 Hz, with varying responses (peaks and valleys) depending on the pattern. The cardioid and omnidirectional are roughly the same, with a boost around 10k and a steep drop off after 18,000 Hz to 20,000 Hz. The figure 8 pattern has a raised shelf starting between 5,000 and 6,000 Hz, and then drops off the same way as the other two patterns.

The AT4050 also has the 80 Hz roll-off and 10 dB pad that one would expect to find on most microphones, and it has a respectable signal to noise ratio of 77 dB and self-noise of 17 dB.

Audio-Technica never ceases to amaze me with the consistency of their line. They have very few microphones that would be terrible in any given situation, most likely due to the fact that they still manufacture out of China entirely. Even their AT20-series microphones are manufactured in Taiwan, last I checked. The 40's are manufactured in Japan. This may not seem like a big deal on its own, but this difference is what causes Audio-Technica to stand out in the crowd. Even though many of their microphones can be considered entry level, they still seem to be far above many midrange products offered by any other company. This isn't to say that Audio-Technica makes the best microphones in the world; it's to say that when it comes to studio microphones, I can't exactly pick out any mic they make as bad.

The AT4050 is certainly one of the coolest microphones in existence. Its versatility and relative affordability (I say this because I just happened to get a chance to play with one, and am not a high-end studio owner who can afford this microphone) make it a great prospect for anyone. The AT4050 doesn't particularly seem to flatter any sort of sound, but it's a multiple pattern microphone; you're not buying it for a specific use. It's a workhorse, it will always get the job done, and while it may not be a perfect fit for that vocalist you had to pull the Blue Baby Bottle out for, it won't make that person sound awful either.

A jack of all trades.
Did you find this review helpful?yesno
»

Audio-Technica AT4050
5
The Audio-Technica AT 4050 is a large diaphargm condenser microphone designed for use in the recording studio. The mic is one of the best that Audio-Technica has to offer, and is overall a very popular model for it's nice sound and great price. The mic has three different polar pick up patterns to choose from, including cardioid, omnidirectional, and figure eight, which are the three basic pick up patterns that multi-pattern mics will have to choose from. The has both a -10 db pad and a high pass filter at 80 Hz. The AT 4050 also comes with a well built shock mount when purchased new.

While I'm usually not one to recommend the microphones made by Audio-Technica, the AT 4050 is surely the best sounding microphone I've used that they make. While it isn't as cheap as most of their other mics, it is for good reason, as the AT 4050 sounds way better than most of the other ones and also offers up a lot more versatility. I'm sure that the main usage that the AT 4050 sees is for vocals, but it can definitely be used for other applications like drum overheads and acoustic piano and guitar. The mic isn't the greatest design out there, but for the price there isn't anything to complain about. Most people I'm sure will look to Audio-Technica for mics cheaper than this even, but if you're a home studio owner and are looking for a go to vocal and/or condenser microphone, this is one of the best deals out there. Even so, I'd recommend checking out a bunch of other microphones in this price range, as there are really a lot to choose from - some are better and some are worse, but before buying you should definitely do your research to see what will work best for you. Personally I'd recommend spending a few extra bucks on the Neumann TLM 102 or 103, but the Audio-Technica AT 4050 is a fine mic in it's own right and is one that I'm sure makes a lot of home studio owners very happy...

Did you find this review helpful?yesno
»
Read the 16 user reviews on the Audio-Technica AT4050 »

Listen to the 7 audio files about Audio-Technica AT4050 »