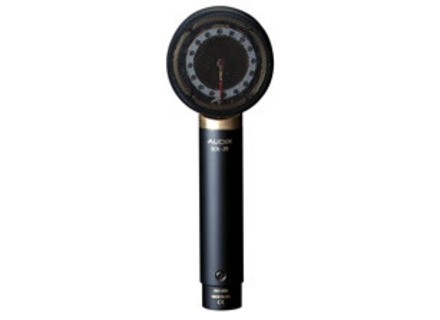 View all offers for Audix SCX25A »

Audix SCX25A
5
The Audix SCX25A is a condenser microphone for recording with a unique circle shaped cage. I wouldn't recommend bringing it outside of the recording studio since it's not cheap and is indeed a condenser mic. The mic has a cardioid polar pick up pattern and a frequency response ranging from 20 Hz to 20 kHz. These mics were a new addition to one of the studios that I frequently work out of, so I only recently had the chance to check them out and I'm glad that I know about them now. These are definitely impressive mics.

The Audix SCX25A's are nice microphones for a variety of purposes. I've used them a few times for piano and I also tried one of them out for acoustic guitar. I think that two that are at the studio where I used them are a matched pair as you can buy a set of two of them that are matched. For recording piano, I was blown away by the sound of these. The studio has a nice and warm grand piano that was a nice match for these microphones. The mics picked up the sound with stunning detail and nice warmth too. I wasn't expecting this kind of sound from an Audix, although I hadn't used many condenser microphones from them since they are primarily known for their nice dynamics mics. Still, the SCX25A's aren't cheap so it's a serious decision to pick up one or two of these. I'd consider them and try them for yourself if you're looking for a set of matched condensers that aren't more traditional pencil mics. There are tons and tons of microphones out there so be sure to do your research. That being said, including these in that would be a good idea as they are unexpectedly amazing microphones for any price range!
Did you find this review helpful?yesno
»

AlexCailliau's review (This content has been automatically translated from French)" Audix I love!"

I have been a few years trs happy user of the Audix. I have in my case a D6, D2 and two i5 and all the microphones fully satisfy me!
Looking for a microphone that would IDAL for the sound of grand piano, I dvolu the SCX25 by not having heard quen overheads on a drum jazz and the view of some al colleagues who had praised the MRIT me.

I could have the choice of AKG 214 (which are cheaper), but won me over with their Audix SERIES D and I have a weakness for this brand.

So I bought two (one pair but not Stereo). A getting started dj a sign of quality mics are heavy for their size! I have first test on a battery overhead rock and jazz ... more twice the sound technician in the room came to me asking me what I used as microphones ...
Then came the test on a grand piano .. The slap! By positioning the capsule has parallle the soundboard, just open the gain and possibly engage the low cut on the one that takes more treble. In some rooms I need to dig 200-300Hz. For the rest nothing to do! a hot sounds! And I never heard a serious as warm on a piano before the acquisition!

The only sore point: it is fragile! Grids protections of the capsule are trs fine and I think they PForm the slightest shock.

There are no photo ... If I had to redo this choice, would not hsitation!