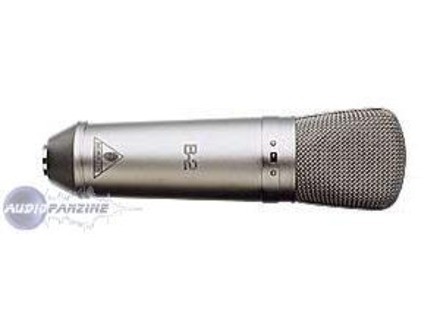 Behringer B-2
4
The Behringer B-2 is a dual diaphragm condenser microphone that can be utilized in either a live or in a studio setting. This is a very versatile microphone and puts out an excellent audio quality in almost any recording environment. I was very surprised with the B-2 because I didn’t think that it would be this good for the price that it cost. It has a gold plated xlr output that will give you great signal quality for recording. The microphone is also very rugged and heavy duty for those musicians that are on the move a lot and get a lot of their gear dropped and banged up. It also has a low frequency roll off switch to get rid of those unwanted noises and provide minimal feedback for a live setting.

The best thing that I like about this microphone is the price, for this price and for the quality that it provides and can be used in multiple situations it was a no brainer for me. Downside of the Behringer B-2 is that if you have an issue with one you already have, Behringer will offer no support at all and try to get you to purchase a newer version of it. I still own this microphone till this day and use it a lot. I am glad that I have it because it is no longer being made, you will have to purchase it used from eBay or from a used store. I have tried many other Behringer models, and through trial and error I ended up settling for this one at the time. Just because it was the most affordable and versatile microphone that they offered at the time. It well surpasses the first version of this microphone the B1, with major upgrades with the roll off switch and rugged structure of the microphone. The Behringer B-2 is a great multipurpose microphone for live and recording uses.

Behringer B-2
2
The Behringer B2 is a budget (low budget) dual diaphragm condenser mic it comes equipped with a carrying case,universal shock mount and a cheap windscreen. I think they should have packaged it with a pop filter as well but that's just my opinion.

Here are some of the key features


I've owned this mic for a little over 10 years and it's one of kind. No seriously the one I have really is one of kind. I purchased mic for 200.00 took It to a studio and recorded with it and it was very very similar to the engineers Nueman U87. The b2 wasn't as smooth on the highs but for 200.00 it was close enough. We spent the entire night (free of charge thank god) running test on the Behringer B2 and his Nueman.

After that the engineer and I went online and purchased 10 of them each. We figured if they sound this good we could record video footage and toss them up on eBay and make at least $500.00. The reason we could make that is because Nuemans were expensive (up in the thousands) and behringer is known as a company that produces so so music gear (depending on the price range) So what you'd have to do is buy a piece of gear and keep returning it until you got one that quality. It' was a lot of work but once you got one it was worth it.

Long story short the condenser mics arrived and out of all 20 mics only 5 were really quality (all different ) but nowhere near as quality as the one I brought in. I think I must have gotten lucky or something.

So is the mic worth the time and effort?

I say it's worth having as an extra mic in your arsenal but if you are just starting out and you're on a budget stay away from it because for an extra $40.00 (including tax) you can get something like a Rode NT1. The Behringer is just too inconsistent with this model for me to recommend without feeling guilty. Not to mention most stores now a days won't do returns on mics for health reasons so it's best to go with a company or model that is more consistent.


Just a little update it seems as if the Behringer B2 was discontinued and replaced by with the Behringer B2-PRO which are consistent and a lot of people are noticing the similarity in clarity it shares with more expensive mics that sit in the $1000-$4,000 Price range.

CROPUS's review (This content has been automatically translated from French)" Excellent for the price!"

Behringer B-2
4
Studio microphone for vocals, the sound of instruments like acoustic guitar, brass, for non-amplified instruments in general!

I used it 4 years, it was my first condenser mic!
What I like more fullness of sound, very nice in general, fairly well balanced, or Omni cardio but it captures even large enough cardio, I like the low cut interesting when you are not on the mixer , depending on leaning forward or backward one obtains acute or severe was pronounced more or less you try, good value for money, I'm sorry to be separated to buy 2 more for less and whose I was happy at first but after a few weeks I quickly realized that the "B2" was well over, I think "BEHRINGER" was hard for this microphone!
I would do without hesitation that choice

Behringer B-2
Hello, I want dabord prciser that this was not an opinion but a request for an opinion. I have russian poster * _ *. I Submitted to start, I am Nicolas de la Picardie webradio Hits. I need help, we look for our studio condenser microphones. I saw that this product will be useful to talk. We are looking for low microphone port (I host I did not know well trs microphone). As we are quite prs of the operator I am afraid that we hear. I'm looking for a microphone to a host micro prs o We need to talk to it "captures". You think this product will admit it?

Did you find this review helpful?yesno
»
Read the 18 user reviews on the Behringer B-2 »