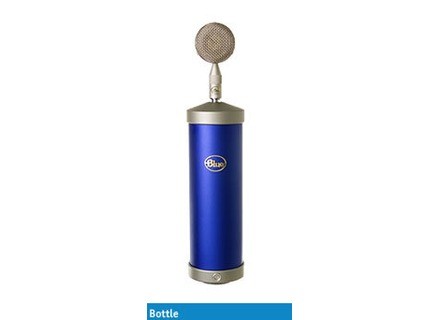 Blue Microphones Bottle
5
I recently had the pleasure of having this microphone in the studio with a freelance engineer who brought it. It's truly a remarkable microphone. I haven't had much experience with this microphone until recently when we did an album for an acoustic singer songwriter and ended up using it quite a bit. It's a tube condenser mic so it's got a great warm tube sound, though it is somewhat different than most tube mics I've used in the sense that it has 9 different capsules to place on it, which can result in a lot of different sounds. It comes with its own power supply and thus it doesn't need phantom power.

I like the sound of this microphone a lot. It's very warm, full of detail, and has a great response. It seems to work best on vocals and that's what the majority of people tend to use it on, but I also liked using it on banjo, acoustic guitar, and piano as well, given it's warmth. I wouldn't use it for piano unless you were going for kind of a roomier, mono sound, but it worked great in that respect.
There are a lot of different capsules, and trying different ones out makes it easy to find a good sound. I'd say that given that variety this is a really flexible tube microphone. It's not particularly noisy either as long as you use the right pre-amp. A tube pre-amp with a tube mic will give you too much noise.
Anyway, considering how expensive this is, this is clearly for studio owners only, as home studio guys probably don't have mic pres or rooms nice enough to warrant such a purchase. Obviously it can't be used outside of a studio environment anyway.

Blue Microphones Bottle
5
The Blue Microphones Bottle is a tube condenser microphone designed for use in the studio.  This is quite an expensive microphone and is also delicate, so use outside of the studio in any application should not be happening.  It has an interchangeable capsule with different pick up patterns and for different uses. Not much more to say about the make up of this mic except that it will come with a case and a power supply.

I've been using the Blue Microphones Bottle for about a year or so and it is probably the best microphone that Blue has to offer, which is saying a lot because they really do have a great line of microphones.  The sound is incredibly warm and full and is great for a variety of applications, but especially for vocals of all kinds.  I've really only used the microphone for vocals, although I'm sure that it will work fine for just about any application that you would want an extreme amount of detail and warmth in your sound like acoustic piano and guitar and other acoustic instruments.  While this is an incredible sounding microphone, it definitely has the price tag of an incredible mic as this is no where near cheap.  For this reason the mic is best suited for professional studios and engineers who can afford a mic like this one.  While I would encourage those interested in a top of the line tube condenser microphone to shop around a bit, the Bottle should definitely be in the conversation as should a variety of Neumann mics and other top brands.  Even if you can't afford this, as an engineer if you can get your hands on one to try it out I know you'll have a good time with it and will be able to appreciate it as a top end mic.

Blue Microphones Bottle
5
This microphone is one of the best kept secrets in recording. It is also a very unique setup, going with Blue's usual business plan. First of all, the mic body is extremely high quality. This mic is a tube condenser with interchangeable. It comes standard with one capsule, which reminds me of a Neumann. The sound on this mic is really breathtaking. It would be very hard to find another mic that sounds as alive as this one does. You could swear that someone is singing between the speakers when you listen back to a vocal recording done with this marvel. Blue mics are hand made in the USA so you know the craftsmanship is top of the line, and that the mic is built to last. There is an external power supply for this mic, which is going to help extend the life of the mic and of the tube within it. This mic is very expensive on its own, and that is with just one capsule. You can buy the capsule set of all of the other capsules, but that costs the same as this mic new! However, you will then get the equivalent of 7 very different, but all extraordinarily high quality microphones in one. There are small diaphragms and large diaphragms, and some in between all with different coloration qualities. A lot of them will sound very much like some famous vintage microphones.

This microphone system is really one of the finest that money can buy, if you have a lot of money. It's not really a great value because it's just so pricey, but it is the best, so if you just want quality look no further, because here it is. I have worked in a studio a few times that had this mic and all the capsules, and it was a dream to work with. Maybe I'll get one for myself if I get rich!
Did you find this review helpful?yesno
»

Published on 01/12/09
Danish hardware and software makers TC Electronic have been appointed distributors for Blue Microphones in Europe and the Russian Federation.

Other names: bottle, the bottle