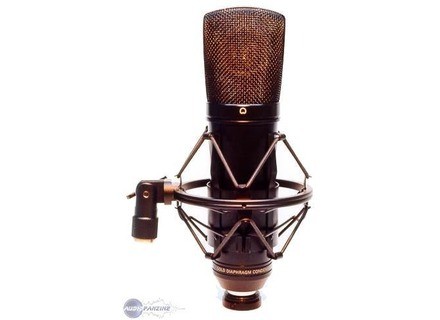 MXL 2001
4
This is a review of the Marshall Electronics MXL2001 Microphone. I bought this microphone as my first real microphone for recording. I had been using stereo 1/4&quot; microphones from Radio Shack, so this was a big step up for me. It's a large condenser mic, I believe 1&quot;. It has a cardioid pickup pattern and is powered by 48V of Phantom Power from your ordinary preamplifier.

I bought this mic as my first mic for studio recording. I had heard various other producers treating it with acclaim, so I decided to pick one up as my first microphone for lyrics. I got it for about $50 off of eBay. I was really happy when it arrived because I was anxious to get into the game. What I noticed at first was the construction. By the feel, I think it's probably metal. It's a thick and tall mic, all black. I liked the fact that it fit in the universal shockmount that I had gotten from the store.

The mic itself is great. It's no Neumann, but it produced a sound that one wouldn't expect from a $50 microphone. It gave a clear sound and is versatile enough for all types of voices. The mic gave a nice, airy sound, without too much rumble, so it's perfect for vocals. It's a rather sensitive mic, and I am happy with the results I got from it. The vocals were generally clear. I recorded in a sound-dead room, so I was able to tell, easily, what it was picking up and what it wasn't.

The mic itself is a piece of work. MXL has truly solidified itself when it comes to microphones. One thing that I noticed was the susceptibility to plosives. However, a twenty dollar pop filter solved this problem.

A few months after retiring my MXL, I ended up at a pretty professional studio. I saw an MXL sitting near the Neumann, and asked the owner of the studio what he thought of it. He said it's a great mic for hip-hop vocals because of the airyness and the warmth. I think that this is a great mic for a young recording artist or producer on a budget.