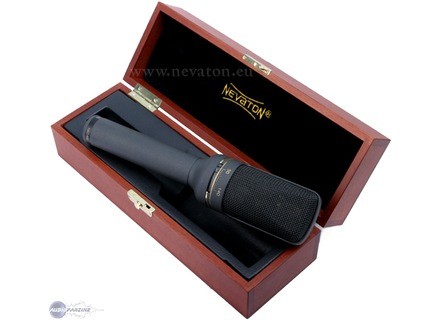 Nevaton MC 48
5
It is a condenser microphone, stereo cardioid whose fear adjust the angle between deuc capsules have a wall outlet of its more or less wide. The adjustment is made mechanically by means of a pull tab that moves in a graduated circular slot outlet sector width value of the 50 ° angle between the capsule is 90 °, and 140 ° where the Engl between the two capsules is minimal (20 ° F). Another active zipper or disables a low pass filte. An LED indicates the presence of phantom power, the microphone is properly oriented when the diode is in the direction of the source. Note that the frame of the gate of the microphone is then also on the axis of the source, which is surprising.

The finish is good, not at the Neumann and others, but higher than that of Oktava, the other Russian brand, which is in a range of lower prices. The microphone comes in a red wooden box whose inner material is a plastic-or cardboard - with a footprint in which the micro encrusted perfectly. I regret had been écnomie buying the elastic mount € 49 proposed by Nevaton because the bottom of the microphone is too big to fit in a AKG C414 mount and the top top narrow to be ensconced in a frame Audio -Technica.

It comes with the frequency response curves of the two capsules. These seem to be real action because they reveal about my copy, serial number 112 (bought new at Audiosolutions there a few months), the pairing of the two capsules, perfect above 1 kHz, poor below where the curve has a continuous slope with attenuation at 20 Hz - 3 dB over a capsule and -6 dB to the other. The standard curve on the package leaflet gives - 4 dB.

I've had a few months. I only record the piano. I was not impressed at first because it is a microphone that does not own color and do not turn my baby grand piano in concert. <img class="smiley" src="https://fr.audiofanzine.com/images/audiofanzine/interface/smileys/icon_sad.gif" alt="sad" />

The first impression is of a specific micro without being aggressive, natural uncolored, a bit shy at the bottom as foreshadowed in the frequency response curve. I had not noticed the special beauty of its rendered before today, when I compared it to a pair of AKG C414B-XLS. I let you judge:

I think this mic is trying also to the overall stereo jack instrumental or choral. Nevaton recommended mainly for orchestra outlet. We should be able to compare USM69i Neumann and AKG C426B, which is no longer made to verify the assertion Nevaton:
it`s revealing, natural, clean sound, make the MC 48 to one of the best stereo-microphones in the world.
In any case I am in agreement with the revealing, natural, clean sound.
Did you find this review helpful?yesno
»