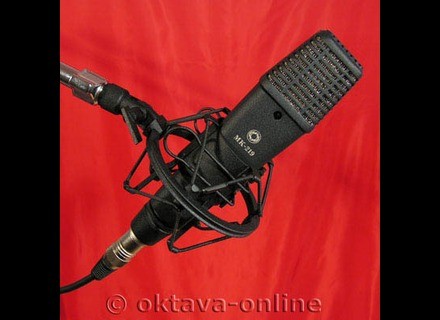 Oktava MK-219
5
I use this for voice over, live performance and studio applications. I did not compare the MK-219 with other microphones. I found this with stand and cable at a Goodwill Store. I was surprised when I saw it. I saw the price and thought somebody was kidding or had set up a sting. The MK-219 will pick-up the slightest sound so if you want a clean recording, don't record in public. I have used it to mic a video set and direct to a video camera (via slr). Versatile, solid. Phantom power can be problematic. The best $45 I have ever spent.
Did you find this review helpful?yesno
»

Oktava MK-219
5
This mic has one of the most realistic room sounds around. No coloring. It is a very flat microphone. We have used these mics for years for room sounds and acoustic guitars. That is the two best applications I have found with this mic. The placement is important. It is very sensitive and picks every nuance up. I love these mics. I recently did a recording session and this was the only mic I used for every instrument aside from drums and vocals. I started with acoustic guitar I and I mic'd the guitar from about 1 foot back from the body and used another one from about 2 feet back and the sound was incredible. I was using a basic pre amp that day nothing fancy. The sound was flat and sounded fat, crisp and clean. There was no colorizing to the sound. I then moved on to sax and horns. We placed the mic about three feet back from the trumpet and the sax and the high mid roll off that I noticed was great for the harsh horns. I used another one for the room and it sounded incredible. I have used these a thousand times and never have I been dissatisfied in any way shape of form. Most people have never even hear of this mic. They have a real flat response but at about 3k they seem to roll off the harsh sounds no matter what the instrument is. If you use this for vocals it could work but I have not use it for lead vocals but I have used it in a backing vocal session a while back and it worked great. I used it to room mic some drums and it became my favorite microphone for live drums and for micing cymbals and tom toms. My engineer loves this mic and uses them at all times on guitar amps and acoustic guitar.

These microphones may not be as well known as other mics but they of the most realistic sounding clean mics you will ever own. I have a pair. www.chrislieckstudios.com. We have used them for some time and quite often. Like I stated most people have never heard of this mic and don't know much about them but I was turned on to the mic by an old buddy and love the way it sounds. It has a warm flat tone that is very clean and very crisp and very very flat. Flat is what you want to use if possible.

Oktava MK-219
4
The Oktava MK 219 is a cardioid , large pattern fixed microphone that provides a high pass filter switch also known as a roll of switch, as well as a 10dB pad switch. If you want to use this microphone for vocals it is almost a must to have a pop filter. If you choose to not have a pop filter you will hear the effects of not having one. I made these mistake years ago and immediately got my pop filter out. Without using a pop filter the MK 219 will sound horrible and really cheap. But if you use a pop filter you will hear how good the microphone really sounds, it is very warm and natural sounding. Oktava claims that the microphone can be used for pianos, as well as acoustic guitars. With acoustic guitars I say yes, but pianos I say no, I don’t feel like the microphone can give a natural piano sound when using it. I have tried it and didn’t like it. But it does sound very good on acoustic guitars.

There are a lot of other microphones on the market that have similar specs to the MK 219 and will give you a sound like the MK 219 but they will cost almost twice as much as the MK 219 does. This microphone will give you a great quality recording and it’s a pretty universal microphone. Vocals will sound amazing (with pop filter) and your acoustic recordings will too. The value for the sound of this microphone is great, it could easily cost twice as much as it does. I was very happy with the decision to use this microphone a few years back, it was one of the best multi purpose microphones that I have ever owned and could afford to own for home recording. You have to try the Mk 219 by Oktava!

Oktava MK-219
4
The Oktava MK-219 is a large diaphragm condenser microphone that is made for the recording studio.  It isn't made for live shows and I wouldn't recommend using it outside of the studio at all.  The mic has a cardioid polar pattern and will pick up everything between 40 Hz and 16 Khz.  It also has a

I've been using the Oktava MK-219 for a few months and it is a pretty cool little mic.  It is good for a number of different situations and has a pretty clean sound quality.  Oktava has a great line of mics that usually sound pretty good and are quite affordable.  This is a pretty unique looking microphone and looks unlike any other mics that I have seen out there for the most part.  I've used the mic primarily for recording acoustic instruments like acoustic piano and acoustic guitar as well as for vocals.  It doesn't have the warmest sound in the world but it will get the job done in a home studio setting.  However, if you are a professional this microphone probably isn't of much use to you.  While it does sound good there are tons of other mics that clearly sound better than this as this isn't up there with the best of them by far.  It is a mid range microphone designed for home and project studios looking to get a nice sounding mic for a nice price.  As long as you don't expect too much from the Oktava MK-219, I think you'll be pretty happy with the sound that you can get with this mic.  However, if you are looking for a top end mic, this definitely isn't it and I would look elsewhere.  Overall, this is a good sounding microphone at a great price, so I really can't complain about it.

Did you find this review helpful?yesno
»
Read the 6 user reviews on the Oktava MK-219 »

Oktava MK-219 manuals and other files