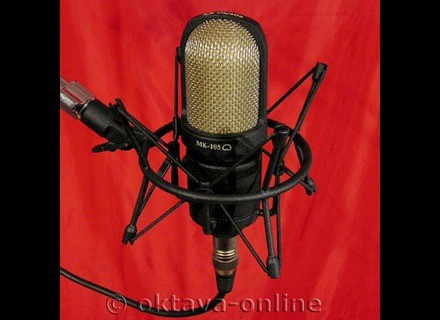 Oktava MK-105
4
Mic static. No directionality or pad, in fact anything. Just a mic.

It is simple, cheap and it sounds like I like. The voice and especially on acoustic guitars and stringed instruments, this is the class.

It is typed with a grain to it. He qqchose Neumanien of the joint.

Must be careful placement, like any mic anyway, but it can be sensitive to Ssss and perhaps drooling at the bottom. To find the right distance and tilt a little. Advantage in an acoustic medium, it captures little sound around. In a preamp correct, it is really good.

Ramitolafutr's review (This content has been automatically translated from French)

Oktava MK-105
5
Among the static large-diaphragm, I know in the Oktava 219 and 105, and there is a world between them! The 219 climbs up to the just more cheap condenser microphone in the range Tbone ...
The Mk 105, which was worth less than € 300 in early 2007, and has nearly doubled in Oktava immediate purchase ... is an excellent microphone, which delivers an incredible fishing, a surprising gain.
The capsule is for something (that would be a stock derived from the German Army, WWII?), And the preamp. board as well.
We tried it without a preamp on floor tom 16 '(made excellent, warm and quite dynamic, curious for a static!) And a guitar cabinet (its wide open).
The spectrum appears to be present.
I'll post you later comparison with another little-known static in CAD: the e100 Equitek whose philosophy (large static membrane) appears to be close!
I do not know the AKG 414, if someone could post a comparison with the mike which is a reference from the static, it would cooolos.