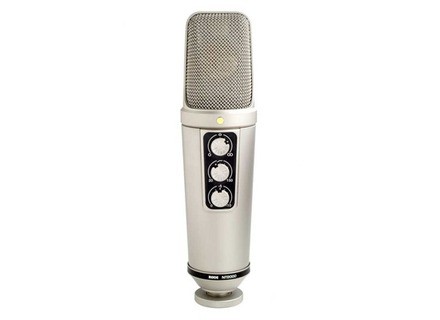 RODE NT2000
5
The Rode NT2000 is a large diaphragm condenser microphone designed for use in the recording studio.  I wouldn't use this mic outside the studio at all and I imagine that most would be smart enough not to do so anyway.  It has three knobs on it that each control a different aspect of the mic.  It has one to choose your pick up pattern (between figure eight, cardioid, and omni) and it also has a high pass filter and a pad.  Beyond this there isn't much to learn about the characteristics of the mic...

I've only used the Rode NT2000 a few times, but in the few times that I have used it I have really liked what I have heard.  I have used it in a home studio to record vocals and it definitely did the job quite well.  It paints a pretty accurate portrait of the sound that you are recording as I found that it will pick up a good amount of detail.  It is more of a clean mic than a warm one as is the case with most solid state microphones, but this is a good thing as far as I'm concerned as I can get warmer sounds from a tube mic and I usually look for a cleaner sound from mics like this.  It is definitely cool to have all of the options in the same spot on the mic so you can easily access them and mess around with the different pick up patterns.  While I've only used this mic for vocals and one time as a room mic for recording electric guitar, I believe that because of the detail that it has it will be a good fit for just about any application that you would want to use a large diaphragm condenser mic for.  The price of the Rode NT2000 isn't all that expensive when compared to most microphones of this caliber, making it a great choice for home studio owners.  Rode makes some great sounding mics that are very reasonably priced so I would definitely recommend checking out the NT2000 and the other mics that they have to offer if you are looking for a great mic or two on a budget.

Rom-g71's review (This content has been automatically translated from French)

I use the microwave for about 3 or 4 months (I have a couple) and I find it really gnial. I use it mainly for voice and acoustic guitars (torque handle / bridge is really gnial). Used also to elect taken guitar (amp transplanting), flute, drums (Over head: glove!), Choral recordings (couple stro) string orchestra (couple stro) etc ... Something gnial this micro: low adjustable cutting 20,150 hz. It's nice to share rode to be thought. Why go into bcannes of frequencies that will turn later to the mix? (In addition to dynamic is lost). it's a thing that seduced me on this mic because my pramps quips are not low-cut (ART DPS 2). I tried a lot of stuff before you buy: NT1000, NT2, TLM103 (good but too expensive for my wallet lol), Audio Technica 4033, C01 Samson Behringer B2, etc ... The quality report prices rode really super interesting. And besides it sounds monstrously good! Hyper versatile. I think with the experience I remake this choice. Prvoir correct Pramp
Did you find this review helpful?yesno
»

drifox83's review (This content has been automatically translated from French)

I do not like too much bump in the treble.
I do not like about my voice.
I thought he would bring out my voice for rock, but this is not the case.
So I use it to record a guitar amp (not bad).

Did you find this review helpful?yesno
»
Read the 15 user reviews on the RODE NT2000 »