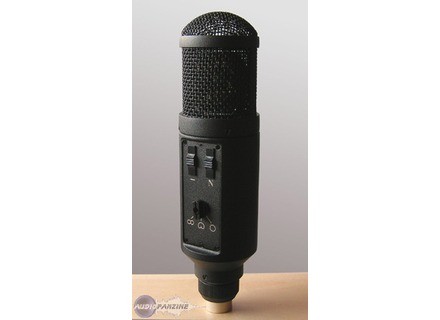 Obsolete Audio's review (This content has been automatically translated from French)" Surprising ..."

microphone for over a year before buying this mic I had the opportunity to try the MK101 (same capsule) the SE2200a, AKG414 ULS audiotechnica of the AKG C3000, here for large membranes.

I bought this microphone after trying to make a conclusive test I made a complete recording of a song by including it in every shot, either alone or in conjunction with other microphones. given the results and ease of use I decided to keep it.

What I like most with this mic is its ease of use, proximity effect is easily manageable (not like on the 414 ULS seeking distance and quickly become loaded in the bottom)

multi directional happens to be very useful and we use an effect on the frequency response of the microphone.

I liked this mic on electric guitars, but here MK012 will be better in my opinion. cons by the voices (especially men) it pulverizes everything I have in my park outside the RE20 I recently.

This microphone incorporates beautiful atmosphere for both the battery only for acoustic guitars (or voice). I also tested on melodica ... sound has a certain warmth, a medium well this without being aggressive, and mild fever, less accurate than a C414 but clear nonetheless. the lower medium is not drooling as he can be on as an invading or MK012 414. the sound is not as dry as what can be observed with a SE2200a, low frequency are transcribed with depth but without overloading.

What I like least is not having a pair

Value for money quite Honet. I would resume a second one day, on