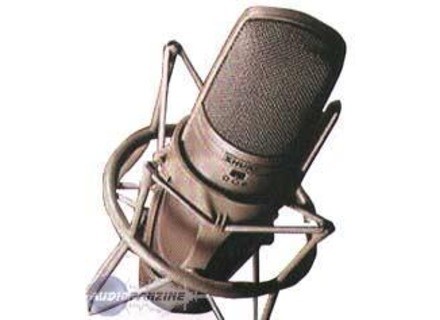 Shure KSM44/SL
5
The Shure KSM44 is a large diaphragm condenser mic. It would be primarily used for recording, but one may want to use it as a drum overheard in a larger production. The mic comes in a very nice metal case, with a velvet slip-case for the mic. It also comes with a shockmount, and a normal mount that you attach the the boom. The mic has a switchable polar pattern, offering cardiod, figure 8, and omni patterns, which makes the mic extra versatile.

It has a switchable 15 dB attenuation pad, which comes in handy when you have very loud sources, such as a hard rock drummer. It also comes with a high pass filter with different steepnesses on the filter - this can be useful to cut down on proximity effect if you are recording vocals, or if you're afraid of some mechanical noise leaking in.

I have been using this mic for about 2 years, and I have a pair of them. I frequently use them for drum overheads as a pair, and for acoustic instruments such as acoustic guitar. I also love this mic on background vocal recording. One of the best features is the switchable pattern, so you can use these as an omni room mic, a cardioid close mic, or even a figure 8. I've used my pair of these mics in a mid-side stereo with one mic in cardiod, and the other in figure 8, and the results were great.

This mic is quite transparent, without too much color added. The highs can sometimes be just a little bit too much, but other than that there isn't much hype. In fact, the added brightness on this mic is just what you may want for something such as drum overheards, which is my most frequent use for these. Being a shure product, they are built in the USA and are rock solid - so if you drop them it's not a huge deal unless you're very unlucky.

I'd definitely recommend the KSM44 as your drum overheads, and also just a great all-around workhorse condenser for other acoustic sources.
Did you find this review helpful?yesno
»

Trashcomedian's review (This content has been automatically translated from French)

Used for four months.
A microphone, what he wants is to record what he puts into it, so the above is Fidler, perfect.
This is my first microphone at this level, so dificil judge. I like his face, its color, its simplicity precision.
Quality-price ratio excellent.
A choice I would do for sure.