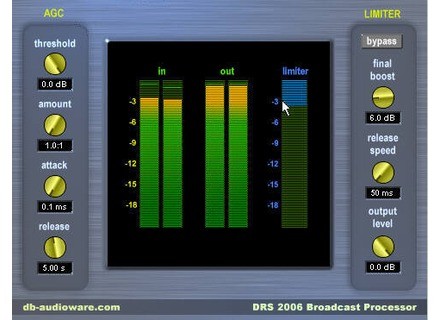 db Audioware DRS2006 Broadcast Processor STD
4
Db Audioware's DRS2006 Broadcast Processors STD is a plug-in designed specifically for broadcasting and touch up purposes. There is a Pro version of this plug-in, but this one is cheaper and less in depth. You can purchase and download the plug-in straight from Db Audioware's website. Unfortunately it's only available for Windows based systems and won't even run on Vista. Obviously, those who can use it will be fairly limited but I believe the Pro version at least has more compatibility options. Using the plug-in itself isn't too tough as it's got a really easy to use interface. The parameters given here include knobs for threshold, amount (ratio), attack, release, final boost, release speed, and output level. It's essentially an extended limiter great for throwing on a podcast or something similar. I don't know if there's a manual for this one.

I'm not currently able to run this on my current system, but used to run the Db Audioware DRS2006 Broadcast Processors STD plug-in on my own one. I had it running in Cubase SX which I ran on a Hewlett Packard Pavilion dv8000 Notebook that had a 3.0 Ghz processor and 2 GB of RAM. This was enough for me to run this plug-in without any issues at all, I think you could get away with running it on just about any system, especially if you're only using it sparingly.

The Db Audioware DRS2006 Broadcast Processors STD is one of the cheapest ways to get a plug-in of this nature. I'd also recommend checking out the Pro version of this plug-in, which offers up a lot more control and is overall clearly a better plug-in. This one can definitely get the job done, but it's more limited in what it can achieve. It's really cheap to buy, but only a handful of DAW users will be able to run it due to it's limited compatibility. However, there might be a good amount of people who could benefit from something like this, so deifnitely check it out if you think you might have a need.
Did you find this review helpful?yesno
»