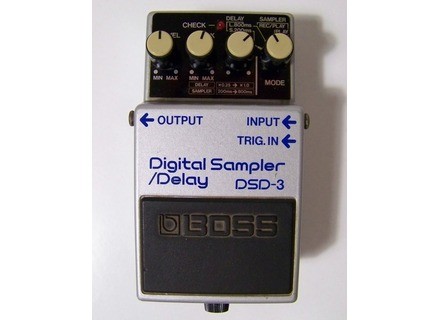 Boss DSD-3 Digital Sampler/Delay
4
This pedal is the exact same pedal as the Boss DSD-2. The only thin that has changed in the number two is now three. What had happened back then was the price of the components of the circuitry chips lowered. Amazing because everything today increases in price. So the chips lowered and instead of dropping the price of the Boss DSd-2 they decided to make a new pedal that was the reincarnation called the Boss Dsd-3. They exact same pedal in every way. This one howevere was made for two years in stead of one for the previous model.

gain this is the exact same sounding and functioning pedal as the Boss DSD-2.There are two delays setting in this pedal S mode did small delay repeats from about 50 to 200 ms. Where the L mode did repeats from 200 to 800 ms. The pedal does sound good if you like the Boss DD-2. This would be one of Boss's most famous pedals and best digital delay to date. These two pedals shared the same internal circuitry chip which gives them the same basic tone for the delays. So if you are a fan as I am of the Boss DD-2 then you would like this pedal. If you don't want to spend the money on a Boss DD-2 which fetch more money that these pedals then you can go for this one is you are using the basic delay functions.

These pedals were only around for about one year. You can still find them in the classifieds and on ebay all day long. They usually fetch about $120 to $130. Which is about $10 more for than the previous model. I would recommend this to anyone who wants the tone of a Boss DD_2 and also the looper function. Its a good pedal fro someone who likes recording live and playing over that recorded riff.
Did you find this review helpful?yesno
»

Flobynco's review (This content has been automatically translated from French)

Boss DSD-3 Digital Sampler/Delay
5
Delay and sampler numrique sold between 1986 and 1988 (Made in Japan then)
Normment like the Boss DD-3 and for good reason, the two are released together, have the same converters and some of the common mode delay ...

Note also the prsence between a jack "Trig in" I've never test. This allows you to connect between the pedals of a rhythm box or Boss Roland 80s (DR-110 style) that have an output trig out! In practice it would mean that reading the recorded sample can be controlled by a pace bote

The DSD-3 is nothing but a vintage DC-3 to which we added a sampler mode.
I takes only 9 because this method is unfortunately limited sampler (especially time) and today there are better (Akai Headrush ...)

The delay mode is easy to use and just like the DD-3 (I know I RPET).
We have:
- 2 types of delay (200 to 50,200 and 800ms): E. Level controls the volume of rptitions, F. Back CONTRL number of rptition and Time Sets the hard e of the delay, the classic!
- A mode Rec / Play: That is used in two ways, either to record their sample, then we can read by pressing the pedals in the fourth and last mode (play only); Either playing in this mode by pressing the left pedals: the sample is recorded immediately reviewed and we can then superimpose sounds.

Some notes:
- In play mode only, we just change the speed and therefore its sample recorded with the Tone knob time, so it is possible to create great sounds
- I tried the pedals with a microphone, and the method rec / play works perfectly with the voices, it is possible to multiply his voice or sounds as measure by superimposing a sound.
- The default: the sample record is deleted when the pedals is no longer fed, must hold on the pedals to cycle or mode used Rec / play it is not always comfortable ...

Even when I put 10 because the addition of a sample function when its usefulness and even allows you to add sound effects and other environments, at worst, it was a good delay!

It's the sound of the DD-3, plutt cold (but with a warm upstream ...) Listen and make you an ide!

I first bought it in 1600 francs in 1987, it still works well trs.
The delay is the most classic, I do not really blame him (if it is not to be analog), and the sample is based INTERESTED Exceeds but by the pedals of today.

They are found sometimes in time, if you want a delay, it is perfect! I RPET, it is a DD-3

Today, my choice would be to plutt line 6 DM4 or a Boss DD 20 for function and delay to a akai HeadRush RC20XL or Boss, but these pedals are much more expensive than a DSD-3 d 'OCCAZ!