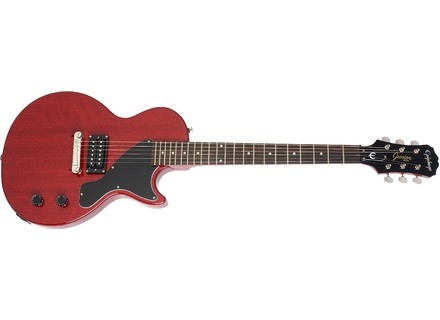 Epiphone Les Paul Junior (Humbucker)
4
Gibson has a load of different types of guitars and they also have a sub branch company called Epiphone which is basically the exact same guitars as Gibson Epiohone's have the exact same type of guitar and see you can get the same type of tone overall with these instruments. This is basically a Les Paul style guitar that is actually called the junior guitar. Gibson's junior guitars feature a single humbucker pick up and the body shape was a little bit thinner and smaller overall.

This is a very cool guitar for someone who likes that Gibson Les Paul tone but wanted in a cool vintage style guitar. It features mahogany wood which gives it a nice warm juicy tone and it fits well in most styles of music. It has a nice focus tone and it's a little bit different voicing from a standard Gibson Les Paul instrument. This is a cool hot Rod Gibson Les Paul guitar because it features humbug to pick up along with one volume control knob and one tone control knob. It has great sound but not something that I would look for in a Les Paul guitar.

These guitars have been discontinued for a while but you can find them fairly easily on eBay or other auction sites and as well as online forums classifieds. This is a cool guitar to add to anyone's collection. If you want a hot rod LP style guitar than this is a cool way to go. I like this guitar a lot but I would not see it being the main go to guitar for me. It does have a cool hot rod look with the single hum but overall the sound is a bit lacking for me. I need a more balanced tone that can cover some of the brighter higher frequency tones.
Did you find this review helpful?yesno
»

Epiphone Les Paul Junior (Humbucker)
4
Made in China, probably, it is a limited edition?
Wraparound bridge, 22 frets, one humbucker, one volume, one tone.

The sound is good both clear that saturated (given the output level of the microphone, easy tendency to feedback)
Amps: lamps or transos, with preference for the tubes.
All effects are allowed, delay, wah, tube screamer, booster, chorus ....
You can change the sound with the tone knob.

I use it for a month, I have 8 other guitars (tele, strat, half body, sg, etc ...)
What I like is the raw sound you get with a setting more simplistic (TV style), and the possibility of having a fat sound with distortion, very gibson.
I would do this choice without hesitation (model anymore, but we used is around 100 €)

Kurtis Koban's review (This content has been automatically translated from French)" How?"

Epiphone Les Paul Junior (Humbucker)
5
A body without Les Paul mahogany table (pleasantly light is great for letting off steam on stage!)
Handle very end for a descendant of Gibson, very playable, I'm on a highway that it would become a F1 test track with a good setup by a luthier ...
mechanics, bah the bare minimum as the humbucker "no name" but having said that, no complaints, it takes all my bending.

As I said, the neck is super nice, good is not the guitar with which I type the most solid (bound => bridge pickup and its area is really the rhythm in my opinion) but I have as much ease with my Gibson SG Special.

The weight of the guitar is another strong point, it does not feel weighed even after 3 hours of intense snooze!

When I bought this guitar, my goal was to play in pubs at risk with my punk-rock. For 95 € no hassle ^ ^ and I must say I am very pleasantly surprised, it provides more than what I did this little beast!

For edgy punk rock that distortionne and feedback on all sides is that, more searching, it does just that.
And because sometimes I'm too lazy to change the guitar, I use it sometimes for more pieces "clean" (One Republic kind) is not the sound that kills but it manages, not quite versatile but not far anyway

Seen between her and me it's going really well, I plan to change his humbucker and here I hesitate,

That said, it's more fun to customize the bike than by real need to improve the sound which is already very good.

The only negative I would point out (and for me it is due to the construction chain, yeah there is not Labris of failing) is that the attachment of the side strap handle is unscrewed all time, so I had to put a small piece of dowel and glue => held foolproof and ultimately, nothing major.

This is not to put a second opinion, but I did try this guitar to a friend who has been playing for about 20 years, he played on mesa, with its eternal Soldano fender strat and he confirmed that this little toy is a killer, he hesitates even to buy one ^ ^

Here you'll understand that price / quality ratio incredible, I especially recommend to anyone who plays under the influence of drugs and who will not be damaging gear or simply anyone who is punk rock, the grunge, hardcore and all kinds of music at its dirty and distorted!

Nekromen's review (This content has been automatically translated from French)" Simple, plain."

Epiphone Les Paul Junior (Humbucker)
4
Made in China, the rest of the details here: http://www.epiphone.com/Products/Electrics/Les-Paul/Les-Paul-Junior.aspx
mine is white and she has the mouth!
Bolt-on neck mahogany body and mahogany, in terms of finish is not very clean and the rosewood fingerboard is cheap for the price but frankly it's going. I ordered it in "the Germans" and I immediately change the microphone to a DiMarzio Tone Zone and the mechanical by kluxon: important thing to know to understand the following test!

This guitar is factory set (at least for me), I spent quite some time has set the easel, moin for the handle. If this is your first guitar this is an opportunity to learn to adjust a shovel! After a little patience I got a satisfactory level of attack, with some wrinkling and here.
I was rather pleasantly surprised by the handle "slim type" (apparently the thinnest kind of gibson). It is still wide, and the difference in pitch (for those who are accustomed to the fender) requests a time adaptation, but after a month of personal use I feel it very well.
The access to acute is sufficient for the vast majority of pieces.
The guitar is well balanced, we just play sitting.
I put 6 for the "after setting" ...

The following is a test area on said Tone Epiphone Les Paul Junior knowing I barely tried the original ...

In the clear: It gives assé right, neutral, soft with a bit of "slamming" all the same. After I have little to say the above, it is not made for ca poor, but know that the tone area will prove a docile when your shades of games as clear distortion.

Disto: The ca pretty hard, the sound is thick, a bit grotty as I like, not muddy and are not keen ears bleed, lots of bass and midrange. For my kind of rock, punk, ca hardcoreavecdescouilles the serious fact. After you have to admit that this guitar does not sustain the masses and the harmonics are not easy to make out (despite a rigorously adjusting intonation). Purists, soloists, here you are warned masturbators.

I use it for a month, this is my first les paul. I fell in love with the look, the only micro, simplistic use and price. And for the 100th guitar ca worth it, visually it is very cheap moin that other low-end guitar yet more expensive. Apart from the lack of an adjustment it will scratch ideal for beginners. Finally if you stuck him a good mic and good mechanics, you have to want a guitar that 200th Road for REPEAT and concerts. Ronck'n'roll!
Did you find this review helpful?yesno
»
Read the 6 user reviews on the Epiphone Les Paul Junior (Humbucker) »