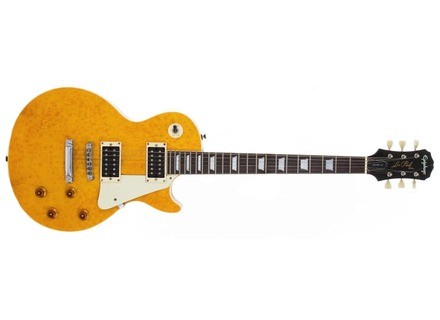 jorphée's review (This content has been automatically translated from French)"IT HAS EXPLODED MY GIBSON LES PAUL STANDARD OF 1987 (SLASH) ON ALL POINTS ...."

Hallelujah sound! So it fits perfectly with my style, being a great admirer and eternal teenager listening to solos Jimmy Page, Slash, Joe Bonamassa, Gary Moore, Doug Aldrich etc ... you get the picture lol
I get the most monstrous of all special les paul I&#39;ve played (really eyeGO not list them all) on the ass, stunning, breathtaking .. I SWEAR you that I not add. .

Good and the earth stops spinning, jvous why ..

I have a gibson les paul standard 1987 which is to be the model used for slash tour guns use your illusion, you see the thing or not? one with a maple top 3-piece single specificity of this year, the original model inspired to YOUR SLASH short, I continue.

The neck pickup is the original, do not ask me what it is I know, and the bridge is a seymour duncan alnico 2 pro slash signature, the first signature model micro slash out during the short velvet revovler I continue.

It turns out that I thought I had the best sound of the earth, for me being a fan of slash to the base (a little more bonamassa now), I play with a configuration bonamassa ie a marshall jcm602 (unknown to many as better for me! I prefer the jcm 800 is tell you) and a marshall dsl 100 plugged into a cab palmer 2 * 12 void in which I put 2 hp EVM
12L.
I have a morley quad box that allows me to split the signal and play the 2 amps at the same time, good sound is the best that you can imagine, it must be heard to be believed.
And I had an Epiphone les paul plus top pro fx which I did not like her and I wanted to share my despair not sell against an Epiphone les paul classic birdseye.
(A big thank you also to the opinions of this site m&#39;à guitar which helped tremendously in my choice).
From the ban epiphone I wanted in my life, because I have never had a single scoop of this brand that had a clean sound!
I made the exchange, I bring the birds eye at me and already worried about the empty guitar and shook my gibson by his SLAMMING VERY MUCH OF HARMONIC AND A RESONANCE ever seen on a guitar before (at rated it was equipped with a set of 9 40ché not what, short of chewing gum) .. (though I have had a great burny grade 59 reissue 1984 reissue as a Orville 59 1998 MIJ real good, not as a MIK that the)
I hasten to change the strings by ernie ball Oct. 46 titanium (best strings in the world, try them and you can not change, they do not rust and do not break, it&#39;s not bullshit lol!)
And my friends believe they have the best sound of all time with my gibson ... and thinking I could salvage with this scoop ..
But ... DOUBLE OUTPUT VOLUME OF MY GIBSON already! Electronics at the same time it is the work of pro! Jmettrais photos!
So that m &#39;has bizare but then if it was the output volume!
The clean clear sound! Net! Slamming! Treble what should too! Monstrous bass! Fenderien sound in middle position! (The fan fender going to kill me) the bridge saturated, sound and endless sustain! That I say! eternal! harmonics erupting but clean as it should be! dynamic defying weightlessness! has a grain into a seizure!
Jm good races on the end .. but I confess frankly I&#39;m disgusted at the same time the happiest guitar with this guitar not even 400 euros!!!
while on the Epiphone les paul more top pro fx j had installed two Seymour Duncan pearly gates, a selector switch with gold plated contacts, she had the sound of a wet firecracker ..
And catastrophe! Say that my gibson! Most perfect of all time! Ultimate dream!
Crushed déchictée in one bite .. by Epiphone
The world is not the same for me today I would not probably be selling this Epiphone, I&#39;ll keep the pampered and played with ease! Better than elitist and yet korea!
Incomprehensible but true, this is a rare find everyone says, I&#39;ve seen two this morning at 1200 and 1500 dollars on ebay! Look with your own eyes! This guitar will become a highly coveted piece ..

Few days ah ah
So many styles
I love EVERYTHING to by though, I would have preferred yellow rather than cherry burst but with all good eh upgrade it impossible to find better.
With the experience I have the choice of years before! Instead of spending in full of others who do not even make weight.
If you find one go for it! Seek not to understand! When you understand it will be too late!

tyson63's review (This content has been automatically translated from French)" a super good plan coréenes the 90s!"

mechanical, not terrible but perform their work properly.

the handle is great, very nice, not too big but just right for a good immediate handling ... rather accustomed to flat or strato-type sleeves, I had no difficulty coping with my big paws ...

micro side, mine being used during disassembly for overhaul, the configuration is very special ...
original neck pickup, bridge pickup and changed by the former owner by a Semour duncan 59 N. ..
And yes not a current neck pickup mounted in the bridge position, unorthodox, but it sounds like hell ... A good height adjustment microphones was necessary to obtain clear sound very convincing, paradoxically, the original microphone (properly tuned) sounds better than the seymour ducan!

a warm sound, jazzy clean sound ...
with a good distortion, we quickly took to gary moore, with a very nice sustain ...

I have several guitars including 2 brand G & L, I think this Epiphone will stay long at home ... excellent value for money ...
a real favorite ...

peffert's review (This content has been automatically translated from French)" "I was not expecting that! (In a good sense)""

natural maple finish birdseyes (although according to some sources it is a fake birdseyes, it has the look and more importantly, it is a series that sounds!)
microphones origin (I guess since humbuckers black like in the pictures catalog).
rosewood fingerboard.
difficult to say what is the body, but I do not think will be of mahogany, dark brown hue despite the data (after unscrewing the plate hiding the electronics back, I realized that the body is wood a very "white" too white to mahogany, basswood? alder? maple? personally I think it does not matter because the sustain is!).
bought secondhand for 290 euros ...

ergonomics very satisfactory. I really do not like playing on the entry level, I would say the finish is exemplary (especially for the price I set)!
relatively small weight (which confirms that it is not mahogany body)

honestly ... I was amazed by this instrument! it is not pure Gibson Custom Shop (which I have tried and where there is no photo ...). For cons, I believe that this "small" guitar slaps a Les Paul Studio (I tried and gave me ice ... but it might not be the right guitar, not and even has some ... les paul standard is to say!) especially considering the price I put! It is possible that there are bad instruments in a series, but from my research on the net, it seems to confirm that the series "birdseyes" EPIPHONE of 90 years is a bit of an exception. I came across it by chance and what luck! Sound (for mine anyway) pure Gibson with the definition on both the micro neck on the micro bridge. Sustain madness ... (I can not even imagine with burstbuckers ...) In short an instrument slaps in sound, especially considering the price I put!

to the conclusion I put a 10/10 because I included the purchase price: 290 euros!. frankly, for that price I will challenge you to find a comparable instrument! For the record, I was looking for a guitar "Jam" in order to get away with without fear of damaging it during evenings or other guitarists play on your guitar, I was facing Epiphone without saying a priori it would be just okay ... and knowing that I did not have in my Les Paul guitars. I expected a guitar without personality and what was my surprise! Today, I bought another guitar to go "Jam" (a Squier, and there is a lot for his money ...) and there is no photo, Epiphone stands out as a guitar exception ... these gems we unearthed without thinking ... They are still in very affordable price then go for it before it will know that it is rare gems ...

played on all tube marshall
jazz / blues / rock
Hot!
for the metal it will take effect in more (I did not)!
the pickups are too criticized in my opinion ... but it's on it's fertile ground for the upgrade ...

I play for 10 years and I play it for 1 year.
I've tested three dozen guitars (I like).

it was costing to allentours 4000frs of its output, so 600euros,
it was not already the new scam.

My model is 1994 if you can find find one in very good condition for 400euros I say banco!

for a beginning guitar / midrange is bluffing!

Did you find this review helpful?yesno
»
Read the 5 user reviews on the Epiphone Les Paul Classic Birds Eye »