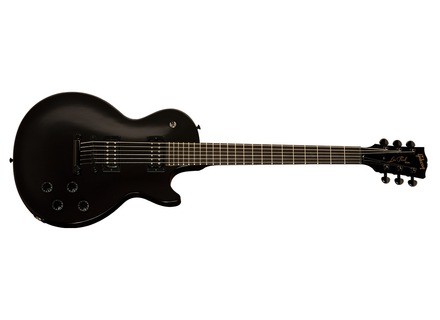 Gibson Les Paul Gothic Morte
5
This jewelery is manufactured in the U.S. Series Nashville studio end models, but improved.
Indeed, e body of the Les Paul Gothic Dead (like the 2008 Les Paul Standard) is equipped with rooms larger tonal developed by computer (Computer Numeric Controlled CNC), whose parameters have been established after a careful analysis resonant characteristics of the original Les Paul, so that these structural changes do not pervert the essence of the referent of this instrument.
The neck is solid mahogany ensuring optimal sound and a conductivity profile with a '50s Rounded 'that falls alone in the hand (even after years of playing on motorways and large flat!).
Another technical feature is the presence of active humbuckers GEM issuing an output level very high but keeping a clean sound to Gibson (that are not EMG).

This is a Les Paul whose shape is not known and highly ergonomic but the most body weight and the handle makes a guitar easier to play and guarantees a pleasure for all sizes of hands.
The guitar was well set with the purchase, which is not always the case.

The sound is HUGE! The tone controls are there for show because the nuances are not in order, like for those who are almost volume of ON-OFF!
In short, it pops out! You can play the blues with beautiful crunch, we can find clear sounds a bit cold compared to a traditional Les Paul, but no way to jazz (or I have not found).

Its domain is the saturation. The metal to the old to the modern industrial sounds, everything is possible and sustain Gibson!

I am a fan of Gibson long but I like the sounds of modern and those particular metal. Moreover, not being Croesus, I folded for years on models less to my taste. I had the impression that this guitar was done for me:
- Les Paul
- Matt black
- Active pickups (of death)
- Simple design
- Affordable price

I'm not saying that this guitar is perfect for everyone but it is almost for me. on the other hand, it comes in a case which is, I think, as to his dangerous life. She sits enthroned in a case Gibson vintage brown / pink wig.

Published on 03/10/11
Gibson has released two new American-made models under the Gothic Mortes names: a Les Paul Studio and an SG.