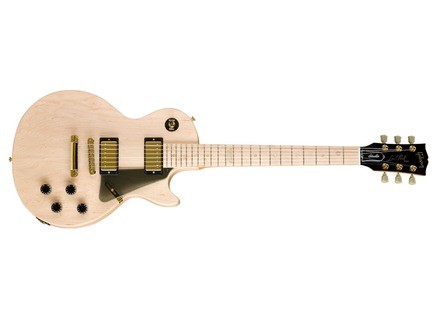 These guitars are going to sound a bit different then what you are used to if you have any experience with a Gibson Les Paul. Since it has a maple neck the tone will not be as strong or as beefy as we know LP to sound. This will lighten up the overall nature since the maple wood is a lighter wood which produces a tone that is brighter where the mahagony is going to be a darken and warmer wood type.

These guitars were on a limited run and thank God for that. Gibson has been producing some scratch your head type guitar as of lately and it seems the company has been going down hill real quick.

The used market is the only way to get these guitars now. I have seen them on the use market for under $1000. Not a bad price but this really isn't a Gibson Les Paul. This is a goofy looking guitar that has slapped Les Paul in the face.
Did you find this review helpful?yesno
»

Gibson Les Paul Studio Raw Power
4
The Raw Power series is another limited run of guitars they put out a few years ago. Gibson goes crazy with their limited run ideas. The Raw Power series of guitars are all maple guitars. The neck fretboard and body are made of maple. With the maple bodies you get totally different tones than you would get on a normal Gibson. This is the Raw Power Les Paul studio. The Studio is a more stripped down version of the Les Paul. This guitar has a maple neck and fretboard with 22 jumbo frets. The body has a maple top and is attached to a chambered maple body. There is no binding anywhere on the guitar. The pickguard is see-through for some reason. The guitar has two Gibson 57 pickups. It has the classic Les Paul control configuration. Each pickup has its own volume and tone control and they were switched with a 3 way switch.

Playability wise the biggest thing on a guitar is the neck. They have put the 50s profile Gibson neck on this guitar so the neck is huge. People call the 50s profile neck the baseball bat neck. This may make it hard for some people with smaller hands to play. With the maple neck and the small dot inlays the inlays can be hard to see if playing in a dark room. This guitar is a lot lighter than most Les Pauls due to it being chambered. This means they cut wood out from the inside of the guitar so it is almost like a semi-hollow. If you x-rayed the guitar it would look like it was made out of swiss cheese with little circles cut out of it. Gibson says this does not affect the tone but it really does.

With the chambering the natural tone of the guitar is really effected. You can compare a chambered Les Paul to a non chambered Les Paul and you can really hear the difference. A non chambered Les Paul will feel more solid. The 57 pickups is something that is common in Gibson guitars nowadays. The Classic 57 pickups are modern day imitation of the classic PAF pickup that Gibson made famous. With the Classic 57 PAF style pickups this guitar is a blues and rock machine. The 57's have just the right amount of sag in the tone so you can really work the dynamics like you would with a set of real vintage pickups. The neck pickup is super smooth and when you throw in some tone knob you can get that sour tone like you have a parked wah on. The bridge pickup has a little more bite and spank to it. With some gain you can get good classic rock tones from the bridge pickup. These pickups can handle more gain than a set of PAF's could. Because of their modern design they retain their composure longer than a set of old pickups could. With the maple body and neck the natural tone of the guitar will be brighter than a normal Les Paul and this will give the guitar more clarity overall.

This is an interesting guitar but it doesnt really sound like a Gibson overall. It all maple construction gives it a bright and honky tone that you do not really associate with a Gibson. Gibson makes a lot of crazy limited run models and this is just one of them. This guitar may be worth a lot some day due to it being rare and not very popular but I would not bet on it. If you are looking for a stripped down Les Paul with a crazy bright and clear tone this guitar meets those specs perfectly.
Did you find this review helpful?yesno
»

Gibson Les Paul Studio Raw Power
5
I have long hesitated between a normal studio flycase included 940 and 850 euros without raw power box. After testing in-store raw power seduced me by its sonority significantly Superior normal studio. It is in the register of the standard with maple table.
I must say that the quip Gibson raw power of the famous 57 classic microphones whose reputation is more to do. Conjugated with a maple body that provides more sustain and precision as mahogany, we are dealing infernal duo for blues and rock.
The mahogany neck provides warmth typical Gibson while the maple key brings nervousness guitar.

Much quality for only 850 euros for once I say bravo Gibson.

It is a round profile 60 'thus less difficult to play the 50's, more satin varnish is very pleasant and can play very fast compared varnish "nitro". Moreover satin varnish to better feel the vibrations and less slippery after 2 hour concert.
In short, the guitar is alive and reactivates, it is ideal for a well MUSCL blues!

57 classic pickups are clearly superiors to 490 and 498 mounts on normal studio, (240 euros a pair that would be unfortunate that Honoapiilani). They sound very vintage, very fat and round to the neck pickup, cutting and singing in the bridge position.
The body and maple fingerboard character brings a little "wicked" the raw power. Raw power it means "raw power" and that is the character of the guitar. The sound is standard, hitter, solid. The Maple brings a touch of precision very useful in saturation.
Slash for his or ZZ Top is the guitar for you!
According rglages can go from fat to very incisive fender fawn. It is the versatility that often lacks in concert on a standard paul.
I repeats but the sound of the Classic 57 is fabulous.

I think this guitar will become a collector as they are now found in stores and sold dropper on the net.
The guitar was worth 850 euros, will register from blues to hard in jazz and rock fawn Hendrix and Gary Moore.
The body Maple is a real good idea because it offers a lot more sustain than mahogany and can withstand very large saturation keeping sound prcis.
For once I take my hat Gibson!
Did you find this review helpful?yesno
»

Gibson Les Paul Studio Raw Power
5
Manufactured Nashville USA
Pickups Classic 57 'of much better than the original 490 and 498 of the normal studio
rable key func with inlay beads and trapze douzime the box.
Channel rather narrow and round, ideal for playing shoot over.
Satin paint very sober.
Body maple one pice "Chambered" for a big sound projection
Finishing the perfect round.
The guitar is pretty heavy.
At the departure i was party to buy a Gold Studio but less thick handle and the best ten times faster microphones made me opt for Raw Power (there remained more than one). on the other hand I strongly dconseille Faded Gibson who have the name (I know because I had one) ... Better to 250 euros more to buy a Raw power.

I had a Gibson SG faded whose handle was very wide and thick, I sold. The handle of the Raw power is just the opposite, more narrow than strat neck, slightly rounded and the strings are rgl ultra low. In short the guitar is super easy to play the bend and taping are a breeze compared Fender sleeve. It is not at all a round of bcheron as often on the gibson ... The Maple key is beautiful, the frets are really well done. It glides effortlessly play solos is super easy compared my Fender or my old faded SG. Really nothing for the handle I put 10/10. The bluesman like shredders will find their account. Perfect!

On the clean channel:
The neck pickup is round and velvety ideal for jazz and blues.
The bridge pickup is punchy and ractif opposite. Even more nervous than my strat but with more power.
The intermediary position is very smooth and fluid, it's perfect for the arpges Stairway to Heaven or purple rain.

The neck pickup sound possde standard, clean shave a city, a real bombing rhythm!
It is great to play solos kind Santana or Gary Moore.
The bridge pickup possde attack and sharp that was not my SG Faded, it is of course of the maple and super micro. In short it is a killer.

The guitar shines with its versatility, while keeping its "Gibson stamp." We can easily do funk like trash on the micro bridge.
However, it is in the blues / rock that I prefers (normal is what I play ...)

I use it for 3 months, the Classic 57 pickups are fabulous. The handle is extremely easy, the poustouflante sound projection. The price quality ratio is amazing. Sure there is no binding or inlays tape the eye as a Corenne but it has the "SOUND USA" closer to a deluxe Gibson Goldtop than a normal studio is dpourvu of maple table. Of the SG Faded I'm really pleased with the raw power. This is a guitar that will kick back in the legend sr Gibson ...
Did you find this review helpful?yesno
»
Read the 8 user reviews on the Gibson Les Paul Studio Raw Power »