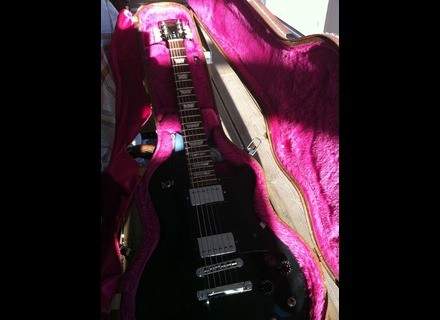 I’ve used this beast in the studio exclusively, with a Boss GX-700 and a Blackheart Handsome Devil.
I mostly play indie rock/metal/blues, and it perfectly suits for such styles !

In the end, my guitar player wants to use it onstage, what a THIEF !!!

I use a 10-46 gauge with NYXL strings, and I get a fabulous sound out of it !
Of course it’s not a Traditional or Standard Gibson, but for such a low price it beats them!
I’m considering adding it Bach Knuckels (I think that’s how they write it ^^) pickups, after which the traditional and standars Lps won’t even be able to compare

I bought it for 350 €. It’s from 1996 – the year I was born 
It’s not expensive, but I had to have the neck arranged, which cost me 35€ at a friend’s who’s a guitar repairman. The wood had evolved with time, the former owner was stupid, he wouldn’t take care of it. It has a hit mark somewhere, but It’s not obviously seen and doesn’t impact the normal use of the guitar.

Cons:
Its weight (I had to put Schallers on it), the tuners which are messed up due to its former owner storing it carelessly.

I’ll add pics later, for those who want to see