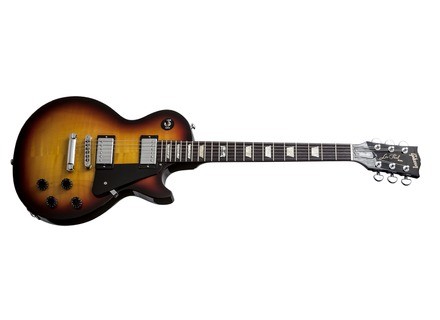 fred-paris's review (This content has been automatically translated from French)" Les Paul for a pro!"

Gibson Les Paul Studio Pro 2014
5
This is a REAL Les Paul Studio, namely that it comes with a holster (brown with pink wig as my studio '96) and with a finish worthy of the name: gloss!

Studio Pro 2014 model is characterized by:
- A split microphones on the volume knobs
- Button "notched" for better grip (like Dimebag Darell but also clean)
- A nice set of pickups (a '57 Classic in the neck (Alnico 2) and an easel BB Pro (Alnico 5))
- A radius fretboard compensated super nice with real rosewood
- Mediums frets "cryopreserved" for increased strength
- Mechanical oil bath
- A chambered body to spare the back
- A slim handle tapper 60
- An inlay "120th anniversary" at 12th fret (and quite discreet class)
- Strap locks already installed (with clips to your belt provided!)

And "last but not least," a sparkle finish to attract all the spotlight on you. Sunburst are fun (with flamed tables) but there's no picture, color Graphite Pearl is one that flashes the most. Dark without light, it sparkles like a garland from a ray of light comes the tickle. We like it or not ... I love it!

The neck is super nice (radius offset rather late) and the acceptable weight. Mine weighs 4.2kg, it is reasonable for a Les Paul mahogany but before recess must have weighed a ton?

Access to acute is average as with all the Les Paul guitar but nobody complains?

With the split, this guitar is always a little more versatile than other Les Paul who would be deprived. You can play with to get a gain level to another or for some clean sounds but do not expect to mimic a-strat with this type of gadget.

The clean sounds are very nice (better than a SG for my taste) and the crunch and large (even very large) distorted sounds are magical. I love my Classic 57 Custom RI 68 and I also like the Burstbucker my 58 Reissue (or R8 for short). Thank you Gibson Les Paul that offer a mix of these two types of microphones!

I use it recently and theoretically I not really need ... but gameplay on such a beautiful guitar, I could only crack. When the seller has confirmed that the case was provided and in addition it was brown / pink like in the good times, the Gold card is taken out of her own wallet!

If like me you happen to play on scenes where the square meter is overpriced (10m2 kind for the whole group ...) and you hesitate to "reliquer" your guitars to Compete Live, this Les Paul Studio Pro should help you get all the sounds you've always wanted without committing all your money on stage. Glitter varnish will undertake to draw the attention of groupies ... In short, buy this guitar run before there was more.

If you think the Les Paul Studio are lower for beginner models, it is time to review your judgment. This Studio Pro 2014 is a killer that should be more than appreciated by professionals and all those seeking a Les Paul not too expensive quality.
As always, I recommend trying before buying because no guitar sounds the same. It will even allow you to negotiate the price a bit, claiming it has some marks ... Anyway, it will not clean retser long as it risks becoming your "number one" for your concerts.