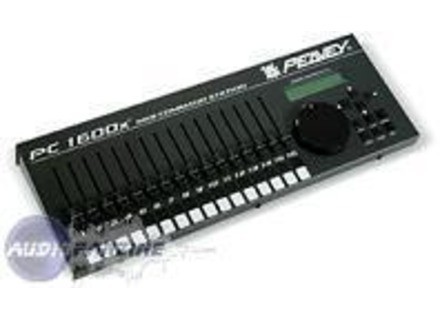 Peavey has certainly packed a lot of features into a small and rather tank like package with the PC1600X. Let’s just say that if you know midi and are comfortable with handling the commands that midi offers, there is really nothing that you can not make this thing do in your midi / DAW system.

It can handle programming and midi tweaking with the sixteen sliders, or you can also use it to handle you audio volume level and pan moves in your DAW mix-down.

I have used one for four years and it never failed to do what I purchased it to do and more.

The only real drawbacks on this unit are that it uses a HUGE power pack of the wall wart variety a whole 16 volts, the display is small and, at time rather cryptic and the volume sliders are not motorized and so you don’t get a visual representation when you go bank to bank as you might in a DAW use.

On the up side it comes with fifty presets that cover everything from Pro Tools presets to keyboards and Harmonizers so there is a good chance that you can use it right out of the box without anything more than some minor tweaking of the settings.

You will find that saving the settings you make is more of a chore than the actual programming, but worth it once you are done.

You can also name and save your presets so that you can have exactly what you want at your fingertips when you need it and named something that is good for you.

I retired mine earlier this year when I got a unit with motorized faders. But it still is working and I gave it to a friend that uses it daily in his home studio. These are great units and well worth looking into.

mizsel's review (This content has been automatically translated from French)

Peavey PC 1600 X
5
This is a MIDI control surface. I finally studied a little closer and I see that Peavey is very universal. It has 16 faders, 16 buttons, 2 connectors for pedals volume and a data wheel.

Each one of them except for the dial data, it is possible to assign any MIDI control standard and most used of them such as the volume is already preprogrammed in the form of options assign. For the data wheel, you can link it to one of the faders, buttons or pedals or the last of them used. It is possible to program the system exclusive messages in hexadecimal format and it even has a "learning function" that allows the capture of exclusive messages in the device memory, which makes it frighteningly universal is a real chameleon.

Well, I'm not a super ace MIDI programming but it looks to be simple to program, if only to know how to trigger the transmission of messages or proprietary know the hex codes for each command supported on the receiving MIDI device. And most of the manuals of any MIDI device has at least a list of supported commands and their hexadecimal codes. In addition, the 50 memory locations, 42 are filled with factory presets which the original settings can be easily found either by reloading the backup via the DUMP function either by resetting the device. These are 42 examples of the application and the settings are not in ROM, which allows to change easily. The buffer, which is the memory where the selected preset is in force on the device does not clear off the device when the data are stored, which saves load each time a preset back before the extinction.

It's just a pity he did not as 16 knobs endless: some commands would have been smarter to be able to control via knobs, like the PAN, the cutoff, etc. and it would have been useful as the faders are motorized ... But hey, a strong point it catches up weak point: once the position of the faders set correctly, you can send your / your MIDI devices the position of each fader and button, and this simply by pressing the ENTER key, which to initialize the settings of your piece before it is played. And that, I'm not sure that all MIDI controller does.

The manual includes a section containing a French translation ^ ^ but it lacks examples and it must refer to the English section for illustrations.

Peavey does not seem to want to develop other surface MIDI, it's a shame.

For now, I use it primarily as a mixer for MIDI drum machines, the groovebox or arrangers. Small and ergonomic (except the jog button is too big in my opinion), it goes everywhere such as between my keyboard and my computer screen ... ^ ^