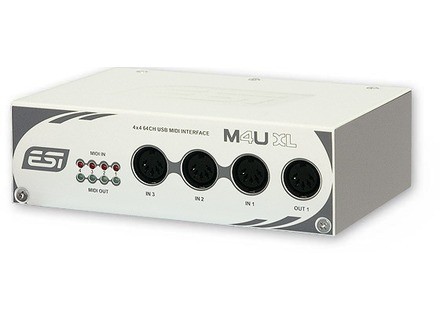 hhub17's review (This content has been automatically translated from French)

ESI M4U XL
5
I needed a box MIDI for two enter keyboard and a controller in the computer and sequencer, while the USB inputs were saturated. The cheapest with no adverse opinion, that was it.
I use a Korg piano, with its two outputs but also the midi output in case I want to change the piano sound for anything with VSTi, and a MIDI keyboard M-Audio first prize and a Behringer BCF- in 2000.
My idea was to play an organ keyboard with two zippers controlled by the BCF.
Setup: I went from a Toshiba laptop to a fixed HP, another Sony VAIO notebook and a desktop computer for Recycling. Operating systems: Win XP, UbuntuStudio, Tangostudio, Fedora CCRMA, Win 7 to 64.

No drivers needed, it is recognized as native USB ALL operating systems I've used various Linux and Windows XP and 7-64.
I use Reaper and turn many VSTI, or Jack / Bristol.
I am updating at least once a month.
Never any problems with this case. JAMAIS.Les only HICS is when I forget to plug in a keyboard and I am surprised not to see, but this is really normal.

Well, two years now that I have and I use it regularly, without trying anything else.
The best: known to be forgotten once it works.
The least: the inputs and outputs are to some (in 1, 2, 3 and 1 out), and behind for others (quite logically, out 2, 3, and 4 in 4), and a diode one side, then the investment is always a compromise. Especially since there is no support or holes for screws, clips or anything to attach to a rack. Remains the technique of double-sided tape, a solution that can be seen that the case is solid steel, so we will not be afraid to pull the adhesive.
Value: RAS, I had seen anything cheaper and it's tough impeccable!
With experience, I wonder why I waited so long merdant with three USB devices that are recognized more or less, we know that there is in1, in2, and in3 through colored cables and diodes when plays, and in some systems just to name devices to navigate even better. And MIDI is lighter and easier to manage than the USB-to-noon.

zedbee's review (This content has been automatically translated from French)

after connection to an imac, everything works perfectly, no driver needed, the case is recognized and fed without any worries. butter ....
The ports are automatically recognized by logic ... nirvana ...

it allowed me to separate two ports on my setup that was previously stuck in a hodge podge unstable, avoid the need to merge on the control interfaces (keyboard, buttons ...), separated on the other two ports.

For a rather low price, you end up with a beefy machine, but no-frills design level.
but not for that ...

not a single problem since 2 months of use, even through the bazaar in the south.
know the equipment to be forgotten, he does what he must do without flinching ...

So nothing to reproach him, except as is often the ports in front, convenient for those who plug and unplug, but painful for a fixed, as are the small wires that give it its positioning, often wrong. Too bad, because the LEDs on the front, it serves well so when they are hidden!