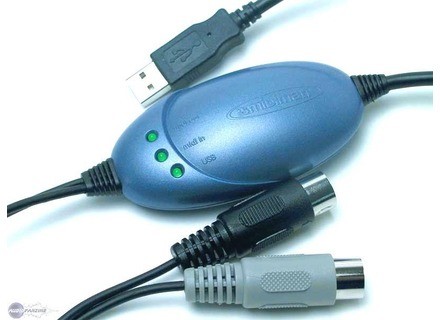 Midisport Uno, MIDI Interface from M-Audio in the Midisport series.

M-Audio Midisport Uno
4
The MIDI Sport Uno is a small plug and play MIDI device that is so simple to set up. You install the drivers then plug it in and you can use it right away. It does not require any power supply and it connects to your computer through USB. The problem that I had with it is that there was like a slight delay between sending out MIDI signals. Which really messed up my workflow a lot. I used it with my M-Audio MIDI controller when I was getting these issues.

The price of the Sport Uno is 40 dollars, you really can not beat that price but how long are you going to use this MIDI device? Do you plan on having more gear (MIDI)? That is where I had to get rid of it , this was the first MIDI device that I actually purchased and used it for about two months, then sold it and bought one with more inputs, the MIDISPORT 2 by 2, then I ended up selling that to get one with 5 inputs. So I wouldn’t waste your time buying this unless you only plan on keeping 1 MIDI connection. It would be better to just invest in a device that has enough MIDI for your growing set up over time. But if you don’t plan on growing and getting more MIDI gear then the Sport Uno will work great for you.

Setting it up was quick and using it is simple. Make sure if you are using it with a MAC that you have 10.1 OS or higher, anything lower than that it will not work. If you are on Windows you will need to download the proper driver especially if you are on a newer system like Windows 7 or even Vista 64 bit. This is a great MIDI device, but it will leave you needing to upgrade within a year.

M-Audio Midisport Uno
4
The M-Audio Midisport Uno is a usb 1x1 midi interface that is compacted into cable form, thus making it pretty easy to connect a single midi device to a computer without the need for any additional midi cables. It is over 6 feet in length and can reach to any devices that are located near a computer setup. It includes both midi out and midi in, although it can be confusing which connection is which, since you would have to connect the Midisport's midi in to the device's midi out, and connect the Midisport's midi out to the device's midi in. It always requires some trial and error to make sure the Midisport is plugged in correctly.

The M-Audio generally requires the drivers to be installed separately, and at least on my older Windows XP system, two sets of drivers were necessary: Midisport drivers, and Midisport loader drivers. When plugging the Midisport into the computer for the first, time, it must run through both hardware driver installations for both the loader and the actual device. This can be confusing, and hopefully M-Audio has updated this driver system for Windows 7. I have no experience using this particular interface on a Mac system.

Overall, this is a great, simple midi interface if you only plan on using it with a single midi device. Being in cable form has it's advantages, but it can also be awkward if, for example, the cable does not reach far enough, or if in a certain wiring, the central box floats awkwardly in the air. But overall, it is extremely portable and works as advertised. Perfect for laptop setups!
Did you find this review helpful?yesno
»

M-Audio Midisport Uno
1
The M-Audio MIDIsport UNO is a 1x1 MIDI in an out interface through USB. In theory, it should be used for encoding and decoding MIDI data to a sequencer in a DAW. MIDI has been around since the early '80s, and is a very basic digital code that keeps tracks of note and dynamic information. This means that any computer should be able to encode and decode this information, as has been around for years, was first used when Apple II's were all the rage, and USB offers plenty of bandwith and speed to run this information.

It is USB, so other than a driver installation, just plugging it in gets it to work. The drivers aren't operated often, but make sure you use the latest drivers if you decide to purchase this.

For my purposes this device is unusable. I wanted to record MIDI in real time, but this piece of junk is way too slow with way too much latency for this purpose. The only way this thing could be used in a studio environment is as a step recorder, not a real time recorder. I guess it would work for transcribing music, but again, this is not how I intended to use it. I no longer use this (although I still own it, somewhere...) but instead use the MIDI input and output from my Delta 1010 LT. Even though M-Audio manufactured both items, the Delta 1010 LT is much more stable and much faster. There are some latency issues with the Delta, but at least it is useable. The MIDIsport Uno is nearly useless compared to the Delta 1010 LT's MIDI interface.
Did you find this review helpful?yesno
»

M-Audio Midisport Uno
4
I bought the M-Audio Midisport Uno because I was looking to hook up a keyboard I had that had MIDI ins and outs. This allows you to send that MIDI signal to your computer via USB and control virtual instruments. This makes the the sounds you can play with a MIDI keyboard just about endless, providing you have the software. The only downfall of this is that it only has one MIDI input and output. It is basically a cable that has a MIDI converter in the MIDI and lights that show up when a signal is being either sent or received from the unit. I use this with a Yamaha Keyboard and a Mac Book Pro computer with a 2.2 Ghz Intel Core 2 Duo processor and 4 GB of RAM.

I use the Midisport Uno to control virtual instruments like Arturia Moog Modular and Native Instruments Elektrik Piano. It allows me to get a plethora of sounds with my keyboard that would not be possible without controlling it via MIDI. I can't think of a time that I really had a problem with this unit as it has always worked pretty well for me and has always run stable.

I've had the M-Audio Midisport Uno for about five years. It is nice to have around because I don't have a MIDI interface and I like to hook up my Yamaha keyboard that has MIDI jacks. I didn't want to spend too much on a MIDI interface becuase I'm not a huge MIDI guy and I don't use it all that often. This lets me use it when I need it without having to invest an expensive piece of gear. I would definitley recommend this to those who have a keyboard with MIDI jacks but don't have a way to hook it up to their computers.
Did you find this review helpful?yesno
»
Read the 38 user reviews on the M-Audio Midisport Uno »