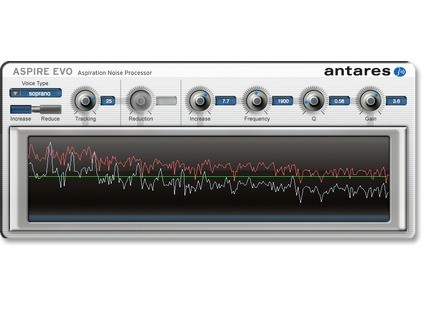 Antares Audio Technology AVOX Aspire Evo
4
The Antares Systems AVOX Aspire Evo is a unique vocal processing plug-in that is a part of the AVOX Evo Vocal Toolkit of vocal plug-ins. The plug-in is unique because it allows you to actually control different components of the human voice without affecting the harmonic content that is there. I wasn't the one to install this plug-in or the bundle it comes in, as I don't own this and have only used it at the studio where I'm working. Learning to use the plug-in certainly won't take just a minute, as even though the parameters are pretty simple, learning to master using it isn't easy. I certainly wouldn't say that I've mastered getting the best sounds possible from it, but after using it for a little bit it's a lot easier to use than it was when I first tried it. The plug-in has settings for choosing the voice type (alto, soprano, etc), as well as if you'd like to increase or decrease a certain aspect of sound in the voice. It then also has parameters for tracking, amount of reduction or increase, desired frequency, Q (band width), and lastly gain. The main working parts here are that of a filter or equalizer, but it's highly specified for the voice. It also has a graph which will show you both the original and the affected sound wave. A manual would be a good idea if you're feeling lost, but I haven't seen one of this myself.

We've got the full AVOX Evo bundle and the AVOX Aspire Evo plug-in running on all of our Pro Tools HD systems at the studio where I work. We have a number of different studios on site, all with Pro Tools HD, so we rarely will have any problems running plug-ins, let alone one where you're generally only going to be running one at a time. That's the case here as I can't say I've ever had anything close to performance issues with this plug-in on any of the systems we've got.

While certainly a great idea and good execution here, the Antares Systems AVOX Aspire Evo is definitely a bit of a glorified EQ. What I mean by this is that at the heart of this plug-in is a specified EQ, so while it's a nice one to have around, most of what can be done in here can most likely be handled using an in depth parametric EQ. Having said this, the Aspire plug-in does it's thing and does it well. In general it's got a clean and realistic tone, but I find that you can't really make too many drastic changes to the sound without it sounding artificial. I wouldn't buy the AVOX Evo bundle for this plug-in, but if you do have the bundle already this plug-in is definitely one that can be helpful to you.