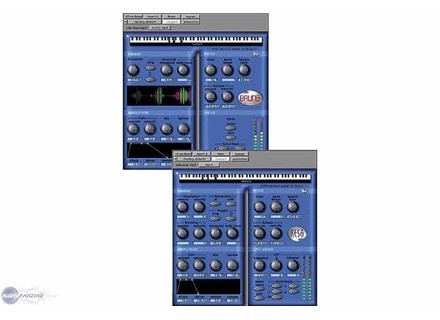 Digidesign Bruno Reso
4
Digidesign's Bruno/Reso is a set of two plug-ins for Pro Tools. They are pretty similar cross-synthesis plug-ins which allow you to run any audio track through them. It's a great way to explore new sounds, as you can literally use this with any audio instrument and achieve a totally new sound. Both share similar looking and configured interface, although each have their own quirks and parameters as well. These plug-ins are sold as a bundle, but can also be purchased individually I believe. Each if their interfaces isn't too difficult to follow, but since I was new to these kinds of plug-ins when I first used it, it definitely took me a little bit of time to understand how to use everything and how to use it most effectively. I don't think you'll need a manual, but it certainly wouldn't hurt.

I don't own this set of plug-ins, but I've used the Digidesign Bruno/Reso set at the studio where I'm currently employed. We've got these plug-ins running on all of the different systems at the studio, as we have multiple studios on site. The main room that I've use this in consists of Pro Tools HD, a Neve 8068 console, Apogee converters, and a Mac Pro computer with 10 GB of RAM and a dual 2.66 Ghz Intel Xeon processor. These plugs don't seem to take up much processing power, but it's always hard to tell in an HD environment.

There's really a lot that can be done with the Digidesign Bruno/Reso set of plug-ins, as it's a unique set of processors which allows can really help to beef up a sound when needed. The thing that I've used these plug-ins for is drums. They're perfect for adding some depth to a kick drum sound where you might be lacking something. I haven't experimented with these as much as I would like, but I'm going to try to incorporate them more when I think I might want to beef up a sound in a non-traditional way. If you're interested in plug-ins like this that use cross-synthesis technique, the Bruno/Reso set is the best bet that I've seen out there...
Did you find this review helpful?yesno
»

Other Digidesign other Effect Plug-ins