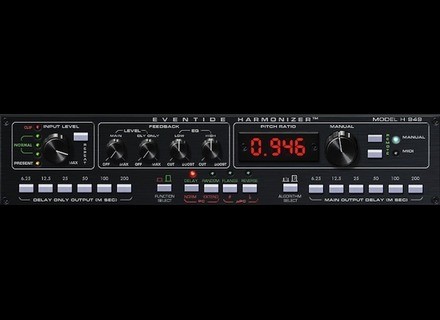 Eventide Model H 949 Plug-in
5
Popularized by Jimmy Page, this plug-in is based on Eventide’s H949, its first de-glitched micro-pitched harmonizer. You can operate it as a single unit, but also in Dual mode for stereo widening, doubling and reverse link pitch alteration. Besides micro-pitch shifting (including reverse pitch-shifting) and intervals (e.g., octave, minor second up, perfect fifth down, etc.), there are great sounding delays (randomized and reverse), flangers and special effects, with presets ideal for human voice and instruments.

The sounds are crisp, clear and unique when compared to typical guitar pedals, etc., since this is an actual digital reproduction of the original rack mount unit. It even has turnable knobs for real-life tweaking. No particular cons and it works with my Windows 7, 64-bit computer (running Cakewalk's Sonar X3 DAW).

Eventide Model H 949 Plug-in
5
The Eventide Model H 949 Plug-in is harmonizer plug-in that's included in the Anthology II bundle. The plug-in is essentially a virtual version of the original hardware H 949, which has become sort of a classic effect processor. The plug-in is capable of achieving a number of effects, including pitch shifting, delay, and flanging. The make up of the plug-in's interface has a decent amount going on but it's still pretty user friendly, even if you haven't used the original H 949. The plug-in gives you parameters for feedback control, delay length, pitch ratio, and a few different modes to choose from. Users should be able to catch on pretty quickly, so I don't think you'll have to refer to the manual on this one.

The studio I work at has the Eventide Model H 949 Plug-in running on all of our systems, as we've got the Anthology II bundle running everywhere. Mostly I've been using it in two of our rooms specifically, both of which are Pro Tools HD systems. Most recently I was using it in our C room which runs everything on an Apple Power PC G5 that has dual 2.3 Ghz processor and 8.5 GB of RAM. Between the powerful machine and Pro Tools HD, I've never had a problem running this or any of the other plug-ins in the Anthology II bundle.

The Eventide Model H 949 Plug-in is really quite a treat to use. The Anthology II bundle as a whole has a lot to offer and this is just one of the great plug-ins that is available within the context of this larger bundle. This has to be one of my favorites of the bunch as it's really versatile and can do a lot for you. I really like using it on vocals, and not just for pitch shifting as I find the delays and flanging to be perfect for getting these effects on vocals. I can't say exactly how it compares to the original H 949 in terms of sound, but rarely do plug-in versions really match up with their predecessors. Having said this, you're bypassing a lot of stress by using this instead of the original as you won't encounter any hardware issues with this at least. It definitely makes the Anthology II bundle worth looking into, as if you like the looks of this one, chances are you're going to love the full bundle.